OMAHA (DTN) -- The wildfires which burned in various Nebraska locations earlier this spring have been extinguished. Now farmers and ranchers begin to assess the damage and plan for the next growing season.

Nebraska faced several wildfires this spring due to an evil combination of extremely dry conditions and high winds. The largest fires occurred in Furnas and Gosper counties in the south-central part of the state and burnt thousands of acres.

A smaller wildfire burned in northeastern Nebraska in Burt County near Lyons. While it covered fewer acres, this fire did destroy two houses and several farm buildings.

While rains fell in early May, the summer weather forecast for the region is not favorable, according to DTN Ag Meteorologist Emeritus Bryce Anderson.

The forecast is for temperatures to average from three to five degrees Fahrenheit above normal, he said. The precipitation outlook is about 2 inches below normal for the summer.

"The result is dry and hot with a potential for crop, hay, livestock stress and of course stress for human health as well," Anderson said.

With La Nina in place and not letting go of its grip on ocean temperatures, the pattern for summer should be dry up and down the Great Plains, according to DTN Ag Meteorologist John Baranick.

July and August look especially hot and dry throughout the Plains. This region could see an extended period of heat and dryness which will likely degrade the drought conditions, he said.

"It probably will not be completely dry, but the risk of heat and dryness outweigh the impact more limited showers will have," Baranick said.

Todd Whitney, a University of Nebraska-Lincoln (UNL) Extension educator covering Furnas, Gosper, Harlan and Phelps counties, told DTN both farmers and ranchers will face many obstacles as the growing season is just beginning in the region.

The area actually saw two fires this spring which affected about 37,000 acres the first time and 55,000 acres the second time, he said.

The fire consumed eight homes and 45 farm buildings in Furnas and Gosper counties. The fires also burnt several grain storage bags, which burned for many days after the fires, he said.

"Considering what the price of grain is today, this is a big loss for those producers," Whitney said.

Whitney said many farmers in the regions lost center pivot irrigation systems in the fire. Some pivots were tipped over in the raging fires, while others had tires and wires damaged.

This comes after a windstorm earlier this winter which damaged center pivots in the region.

"The irrigation repair business will be busy for quite some time trying to repair and replace the pivots damaged or destroyed in these fires," he said.

The fires also burnt the residue from last year's crops off the fields, thus exposing the soil. Farmers have used conservation practices on their land for many years and these advances could be derailed by the effects of the fires.

Whitney said, specifically, less water infiltration could be seen without the residue. This could then lead to erosion issues, he added.

It may take a few years to repair the soil after having been exposed to wind since the fires, he said.

The good news for crop producers is the soils did not lose any organic matter, he said. With spring planting occurring now, hopefully these bare acres will be covered with growing crops in the coming weeks.

Livestock producers also will have a unique set of obstacles this spring.

Whitney said some lost cattle in the quick-moving fires. While some were able to move livestock before the fires, many pastures and rangelands saw miles of fence destroyed in the flames.

The lack of available fencing material and the rising cost of these materials are just a couple issues facing the region's livestock producers this spring. If they can find fencing supplies, these items are going to be significantly more expensive than in past years, he said.

Many livestock producers lost forage in the fires, whether that be hay or grazing acres. Hay was already in short supply before the fires and this situation is only going to create more demand for hay, Whitney said.

The grazing season will have to be delayed somewhat as the burnt grass will need extra time to grow before grazing can happen. Those who graze cattle will probably have to lower their stocking rates this grazing season as the grass regrows after the fires, Whitney said.

While much devastation happened to the area, Whitney said one positive thing is the loss of life was fairly limited.

Two volunteer firefighters were killed fighting the fires in the region. The area grieves for the loss of life and for their families; the size of the fires could have killed more people if not for the local firefighters, he said.

Whitney said another good thing to come out of these tough times is the amount of people willing to help those who were affected by the fires. Local banks and other businesses are collecting money and supplies.

The Nebraska Cattlemen organization has put together a webpage of different ways you can help the victims of wildfires.

To see a first-hand account of dealing with wildfires, see 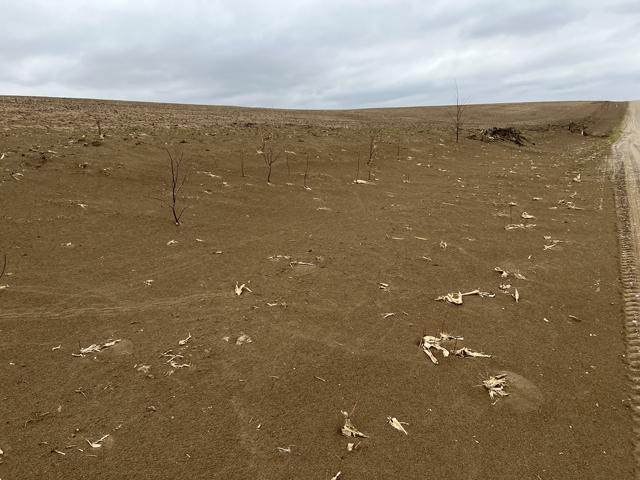