Long before Russia's President Vladimir Putin gave the order to attack Ukraine on Feb. 24, 2022, the West had talked about Russia's threat, but couldn't decide what to do. I recently revisited a Todd's Take, written seven years ago on Feb. 10, 2015, that expressed concerns about events that sound eerily familiar to what we are witnessing today.

For all the benefits we enjoy in the West from having democratic forms of government, one drawback appears to be that we democracies are not good at reaching proactive solutions. We can unite on a course of action after tragedy hits but are prone to small-minded bickering when the problems are less pressing. What does that have to do with grain markets?

As today's situation shows, quite a bit.

It is encouraging to hear reports the U.S. and Europe have united to supply heavy weaponry and intelligence to the Ukrainian military. Approaching Easter weekend, I pray it is not too late to stop the massacre of more innocent civilians.

Repeated below for your consideration is the Todd's Take I wrote on Feb. 10, 2015, entitled "Ukraine Remains a Bullish Risk."

It has been almost a year since Russian forces took Crimea from Ukraine and began supplying pro-Russian separatists in eastern Ukraine with the military means to fight Ukrainian authorities. Wheat prices climbed early in 2014 when the conflict first erupted and again in late 2014 when there was talk of Russia limiting wheat exports but have otherwise ignored concerns in Ukraine while world supplies have remained plentiful.

In its January WASDE report, USDA estimated that there will be 7.2 billion bushels of world ending stocks for 2014-15, or 27% of annual use, which is a comfortable level and slightly above the 10-year average. That has been enough to discourage buying and keep wheat prices under bearish pressure. March Chicago wheat closed at $5.29 3/4 a bushel on Monday, Feb. 9, a fundamentally cheap price that is 8% below USDA's estimated cost of production for all U.S. wheat in 2014, excluding land expense.

Because of the market's boy-that-cried-wolf response to the on-again, off-again pattern of tensions between the West and Russia over the past year, the price of wheat shows no bullish premium for Ukraine's problems. In fairness, lower wheat prices in 2014 were understandable as Ukraine's ability to produce and export wheat went mostly unhindered. However, the peace agreement reached five months ago has failed, and it is becoming increasingly clear that this conflict is not going away.

As France's President Francois Hollande said last week, "If we don't manage to find not just a compromise but a lasting peace agreement, we know perfectly well what the scenario will be. It has a name, it's called war." The United Nations shares President Hollande's concern. On Feb. 5, the Office of the U.N. High Commissioner for Human Rights said that the rising death toll in Ukraine now exceeds 5,358.

Of course, an escalated war in Ukraine, if it occurred, would give wheat prices plenty of reason to trade higher, as Ukraine supplies 7% of the world's wheat exports. However, even the current level of fighting, if it continues, is disruptive and expensive enough for both Russia and Ukraine to hinder the production and the flow of wheat in 2015. Ukraine's port city of Mariupol, a key hub for exporting grain from eastern Ukraine, is a likely target of Russian expansion. The port offers Russia an important route for connecting to Crimea and is one important reason that Putin is in no hurry to end the fighting.

Both the Russian ruble and Ukraine's hryvnia have lost nearly half of their respective values since the end of 2013. The latest 3% drop in Ukraine's hryvnia came last week after Ukraine's central bank announced that it would stop supporting the currency and raised the interest rate from 14.0% to 19.5%.

The higher rate was intended to help support the currency, but no rate hike can help a plummeting currency when the country itself is in danger of coming apart. Under these conditions, securing financing for planting in 2015 will be a challenge, and understandably, producers tend to hang on to grain when their currency is suspect.

Dow Jones reported Sunday that representatives from Germany, France, Ukraine, and Russia are trying to meet this week in Minsk in an effort to end the fighting, but few are hopeful. Pressured by Republicans in Congress, President Barack Obama is considering increased military aid to Ukraine, but European leaders are opposed. The U.S., by playing bad cop, may help this week's negotiations with Russia, but with no realistic counter-balance available in the region, the future of Ukraine is in serious jeopardy. As the tragic cost of fighting grows, Ukraine's problems continue to present a significant bullish risk to wheat prices in 2015. 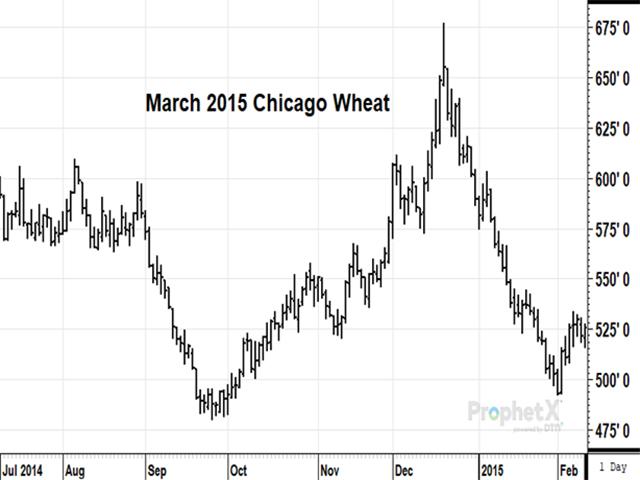