Farming near a larger city, you see certain things which someone else who lives in more rural area might not observe. I grew up just about 10 miles outside of Omaha, Nebraska's largest city, but today my hometown of Elkhorn is a western suburb of the ever-growing city.

For the last nearly 20 years, I have lived on a farm about 35 miles northwest of Omaha. Far enough away that we live in a rural area, but we are still are close enough to most of our family and friends.

After several heavy rains hit various parts of the city this summer and it missed our area north of Omaha, one of my farmer friends lamented "all the cement" caught yet another rain. We are not as dry as other areas, but we could use some rain here late in the growing season in east-central Nebraska.

On Aug. 27, another severe thunderstorm rolled through this part of Nebraska. Severe thunderstorm warnings were issued for 60 mile-per-hour wind gusts and possible hail damage. My area was on the northern edge of the warned area. Elkhorn and parts of Omaha got fairly heavy rain and some areas of eastern Nebraska received hail up to 2 inches in diameter.

But, as the impressive cloud moved northeast, it slid between my area and the city. My rain gauge didn't receive a drop.

So, do the cities really catch the rains here? Had I never noticed this before? Do I ask too many questions?

Generally, there is no scientific proof that cities attract more rain than the rural areas near the city. It is a psychological effect called "confirmation bias," Baranick said.

When you notice a time where you get missed with rain and someone else gets it, you look for a reason why. Typically, with weather you look for a physical effect because we are physical beings and it is easy to see something like a city getting rainfall while a rural area does not, he said.

Baranick said this may cause you to put a belief in your head that x occurs because of y. Every time it happens, you see it as a confirmation that reinforces your belief.

But when the reverse is true (like our rural area getting rain and the city doesn't) it doesn't register in your head because it doesn't confirm the idea you have. You either don't notice it or you reject it, he said.

"My grandfather, who lives in Venice, Florida, always says 'there's an umbrella over Venice' as he claims he is always missed by the big thunderstorms," Baranick said. "Then he talks about how it rains just about every afternoon in the summertime in the same conversation."

That is confirmation bias.

This hasn't stopped other people -- and researchers -- from asking the same question about whether cities get more rain. NASA wrote about it and said that it can actually be the buildings "provide a source of lift to push warm, moist, surface air into the cooler air above it, where it can develop into rain clouds."(https://earthobservatory.nasa.gov/…) And Nature magazine said it had looked at several hundred papers on the topic and drew its own conclusions about what the studies found. (https://www.nature.com/…).

Baranick said there are small effects that cities have on the weather.

The "heat island" effect is real and cities are often several degrees warmers than the surrounding countryside, depending on the amount of concrete in a city. However, often the effect doesn't occur over the city.

Some research has shown that rainfall 20 to 40 miles downwind of the city center can have 28% greater rainfall than 20 to 40 miles upwind (https://www.theguardian.com/…).

Using this as an example, the theory would have areas east of Omaha (since weather generally moves west to east) in western Iowa seeing significantly more rainfall.

"I think confirmation bias would be the obvious reasoning," he said.

Now I can't wait to tell my friend "all the cement" that always gets the rains is just something in his head. Knowing him, I am sure he will fully accept this.

I am being sarcastic here. He will still think Omaha is hogging all the rain. 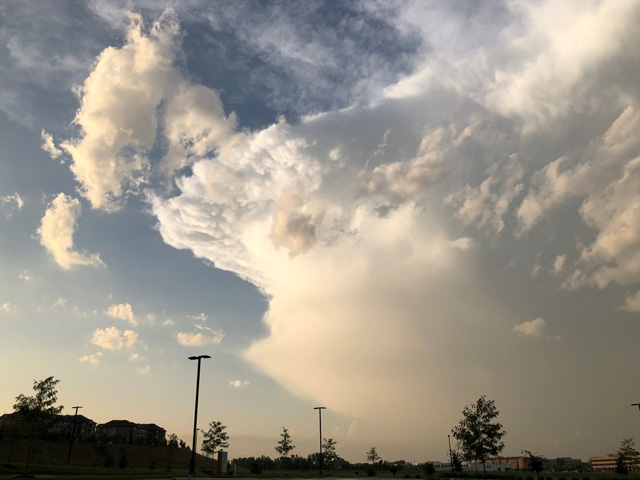