Open: 5 cents higher. October cattle are down 35 cents early Friday after nearing the July high of 107.22 on Thursday. October cattle followed Monday's sharp sell-off with three sessions higher and prices are now back to challenging four-month highs. Year-to-date cattle slaughter is 5% lower than last year, but packers have shown more interest of late in negotiated cattle, accepting more volume and paying a few dollars above the formula price. USDA estimated Thursday's cattle slaughter at 119,000, down from 123,000 a year ago. Cash trade has taken shape this week mostly near $97.00 to $97.50 for live cattle in the South, roughly steady with last week. In the North, trades have been roughly $2.00 higher, around $160. Thursday's boxed beef trade pegged choice prices at $201.80, roughly steady from last Friday. Selects finished at $191.50, up 87 cents since Friday. Total open interest was up 222 at 282,715 on Thursday's higher trade. August contracts were down 2,716 at 32,371 and October was up 1,290 at 123,874.

Open: 7 cents higher. September feeder cattle are down 40 cents early Friday, showing caution after bumping up near the July high of $144.80 on Thursday. Demand for feeder cattle continues to be impressive at a time when supplies were thought to be ample after coronavirus slowed slaughter activity earlier this summer. From a technical viewpoint, the trend in September feeder cattle is up and the next resistance is at the 2020 high of $157.20. Monday's sell-off now looks like a head fake with feeder prices knocking on the door of a new five-month high. The Feeder Cash index for July 29 is listed at $139.24, up $1.28 from a week ago and encouraging the higher trade in the futures market. Total open interest was up 244 at 43,051 on Thursday's higher trade. August contracts were down 335 at 6,506 and September contracts were up 489 at 14,292.

Open: 45 cents higher. October hogs are down 5 cents early Friday, still struggling to get any lift in futures prices in spite of gradual improvement in the cash market. Negotiated trade was reported at $41.36 Thursday, still below the formula average at $53.05, but a significant improvement from the sub-$30 prices seen not long ago and an encouraging sign of improving balance in the market. Even so, getting back to a profitable cash hog market remains a slow process. USDA estimated Thursday's hog slaughter at 475,000, up from 471,000 a year ago. Pre-coronavirus slaughter levels near 500,000 are still not reachable and may not be until a vaccine or better treatments become available. Pork cutouts were at $67.57 on 389.80 loads Thursday, down $2.96 from last Friday. Friday's packer margin was estimated by Dow Jones at $50.70 per head, lower than it has been, but still enough incentive for packers to keep buying where processing capacity is available. The Lean Hog Index for July 29 was posted at $53.56, up $3.87 from last week and roughly $2.00 above the August futures contract. Total open interest was up 705 at 230,706 on Thursday's lower trade. Open interest in the August contract was down 2,049 at 26,492 while October contracts were up 622 at 102,642. 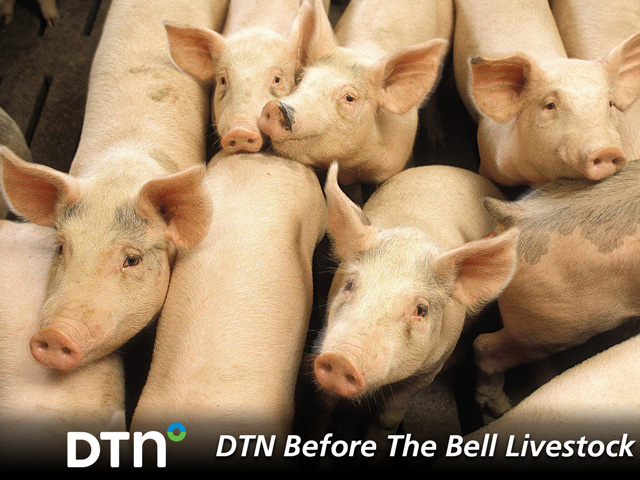