The Supreme Court will hear arguments from NPPC and the American Farm Bureau Federation (AFBF) on Oct. 11 against the state of California and the Humane Society of the United States over Proposition 12.

The high court agreed to hear an appeal from NPPC and AFBF after the Ninth Circuit upheld the law. The farm groups argue California's law, which remains under an injunction, violates the U.S. Constitution's interstate commerce clause.

NPPC leaders on Thursday talked to reporters about the case and the risks for farmers nationwide if the Supreme Court doesn't overturn California's law.

"California is free to regulate hog farms that are located in California," said Michael Formica, chief legal counsel for NPPC. "So, to the extent they want Proposition 12 to apply to those hog farms, that's well within their authority to do so. Our concern is when they reach out to Iowa, Minnesota or Missouri and try to tell those farmers what they are able to do."

CAUGHT IN THE MIDDLE

Scott Hays, president-elect of NPPC and Missouri farmer, said a further issue with allowing Proposition 12 to stand is that another state would come up with a conflicting standard, leaving producers caught in the middle.

"So, if it's upheld, then is Oregon going to pick a different plan?" Hays said. "Does Washington pick a different method? How are we as producers supposed to respond to all of these different states and potential propositions or regulations? We have one operation, one pig, that we're trying to deal with. I don't know that we as producers are going to be able to accommodate everybody's individual state standards."

Similar state laws could apply nationally to dairy, cattle or other livestock production as well.

Hays said his family, which has raised hogs for more than a century, is frustrated over the animal-welfare perceptions given that his parents and grandparents developed practices over time to protect hogs from aggressive behavior toward each other.

"Now we have some folks that know nothing about raising pigs, or very little, come into our farm and telling us how it should be done," Hays said. "We've done it that way because that was the only way we could do it 50, 60 years ago, and it doesn't work. So, we feel like we're going backwards on animal care."

California accounts for about 15% of domestic pork sales. That level requires production from roughly 750,000 sows. California has only about 8,000 sows. Some companies have said they could meet California's standards.

Terry Wolters, NPPC's president and a pork producer from Minnesota, said if the law were to stand it would force producers such as himself to expand sow space about 20% and pay for those costs. It would further drive consolidation -- already an industry concern.

"Individually, producers are not going to be able to handle that at a small level and therefore they will end pushing small producers out of the business," Wolters said.

The complexity of pork processing, storage and shipping also come into play. Once a hog is processed, hams may go one direction, bacon or pork chops another, the NPPC's Formica said.

There is an international component of Proposition 12 as a lot of feeder pigs in the Midwest come from sow and breeding operations in Canada.

Both Canada and Mexico have signed on to the case backing the farm groups "because products that would come from outside the borders of the United States would be impacted by this rule as well," Formica said.

While Proposition 12 regulates space requirements, California's attorney general acknowledged under the state's legal argument that the proposition would enable California to regulate different standards in other states such as wage requirements.

The Biden administration is siding with agricultural groups. The U.S. solicitor general filed a brief in June asking the Supreme Court to strike down the law. While the court hearing will be held Oct. 11, it's likely the Supreme Court will rule sometime early next year.

Lori Stevermer, NPPC's vice president and a pork producer from Minnesota, also pointed to the risks of higher food inflation. Pork prices have gone up 6% to 7%, but the industry would lose some production and producers would face high compliance costs that would further drive up food prices.

"It will increase the costs of raising pigs. That will increase the costs to the consumer. Pork prices will go up," Stevermer said. Talking about comments she gets from consumers at public events, Stevermer added, "People come up and tell me they like pork because it's versatile and because it's affordable. And certainly in these times of inflation and people already watching their food dollars, that's big deal." 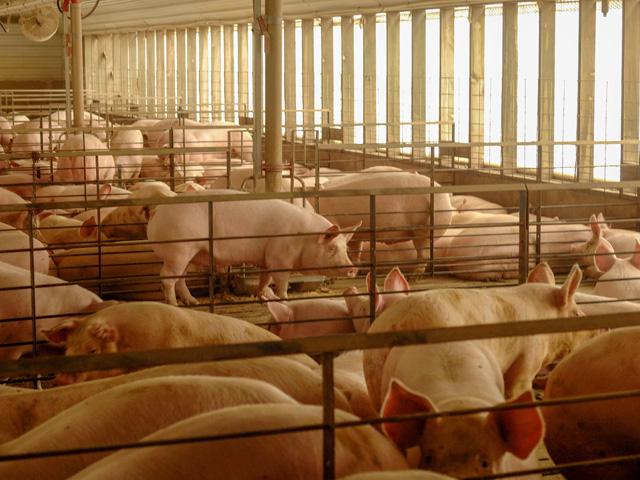