"That is not to say all (weed) populations are resistant to all of these groups, but it illustrates Palmer's ability to adapt and the potential for populations to become resistant to multiple modes of action," said Jim Heiser, MU Extension researcher at the Fisher Delta Research, Extension and Education Center in Portageville, Missouri.

In 2016, researchers identified a population of Palmer amaranth with resistance to glyphosate (Group 9) and PPO (Group 14) north of St. Louis in the Mississippi River bottoms. Screenings for resistance began in 2007.

In the most recent study, researchers collected 60 samples from eight southeastern Missouri counties in 2020. They confirmed only one resistant sample in a Butler County soybean field, but Heiser said in the news release that resistance is likely to occur in more fields due to pollen spread and with testing of additional populations.

University of Missouri weed scientist Kevin Bradley told DTN the population found in the Bootheel region of the state wasn't a big surprise given the selection pressure being put on glufosinate. The postemergence herbicide, which is also sold under the trade name Liberty, has become increasingly used with the introduction of new herbicide trait platforms and as weeds have shown resistance to other postemergence herbicides.

So far, Palmer amaranth has been identified in 45 counties in Missouri of the 114 counties in the state. Populations are more concentrated in the Bootheel region of the state, while waterhemp thrives better to the north, Bradley said. "I would assume we have glufosinate resistant waterhemp in Missouri too. It just a matter of how long before we find it," he told DTN.

Palmer amaranth is a gnarly adversary -- it spreads and adapts quickly to herbicide and is a prolific seed producer. For more on how to identify Palmer amaranth go to: https://www.dtnpf.com/….

Cotton, Inc., helped fund the multistate screening project that included MU, University of Arkansas, University of Tennessee and Mississippi State University. The team's research was published in the scientific journal Planta, which can be read here: https://link.springer.com/…

To learn more about Palmer amaranth and other weeds, go to weedscience.missouri.edu. You can also download the free ID Weeds app at weedid.missouri.edu. Find MU weed science information on Facebook at Mizzou Weed Science and @ShowMeWeeds on Twitter 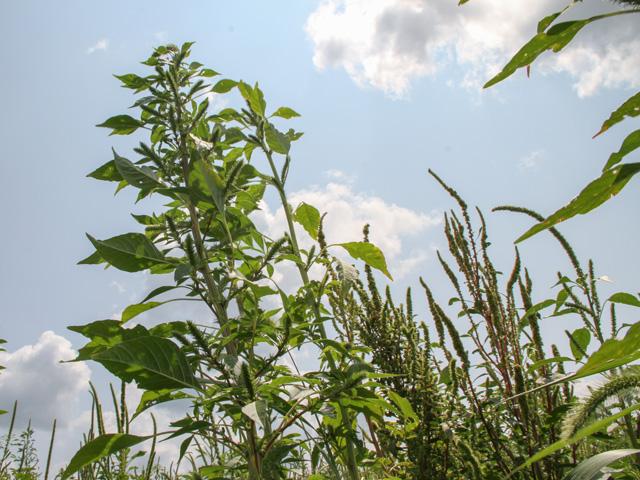