Several months ago, my family attended the birthday party of a friend of ours. The party was held in her father's farm shop.

Our friend's dad had an interesting collection of vintage farm items that he proudly displayed on several walls of the shop. From previous generations of his farm family, he had wooden wagon wheels, antique hand tools and many old photos adorning the walls of this building.

Up to this point in history, all milk cows were milked by hand. This handy device allowed for cows to be milked by a machine, a giant step forward for dairy farmers roughly 100 years ago.

I discovered a website (https://www.old-engine.com/… that detailed how a De Laval milking machine worked. According to the website, it was actually called the Alpha Dairy Power Plant.

The engine was used in connection with other parts of the system. These items included De Laval Magnetic Milkers, a De Laval cream separator and a De Laval Barn Lighting Outfit.

The machine came with a 1.5 or a 2.5 horsepower small engine, which could operate one to six milker units. The device provided power for milkers, cream spreaders, churns and even lights.

A four-light system could be purchased with the engine to power lights to the milking barn -- before electricity had made it to most of the nation's farms. It even had a built-in water heater, which heated 4.5 gallons of water for washing milkers and other milking equipment.

The system used vacuum control to move the milk through the lines. It also features a sanitary trap that would catch any liquid or foreign substances.

The small engine and the main line were the only parts on display in the shop. Over the years, the milkers and the lines were lost or discarded.

But, still, it was a fascinating look at dairy equipment history in his shop. I knew these machines were essentially the first step in automatic milking systems, but I had never seen one in person before.

Perhaps it was my own farm family's history revolving around dairy farming that I found this piece of equipment so fascinating. As I have written about in the past, the previous generations of my family were dairy farmers.

My great-grandpa, grandpa and then my dad all milked cows on the same farm. They started milking in the barn by hand and then moved to a system with surge buckets. Then, in the late 1950s, my grandparents built a milking parlor.

My grandparents sold their farm about the same time I was born in the mid-1970s, and thus, the milking facilities were sold too. My dad rented a farm long-term and then later bought the buildings, but the farm did not have any milking facilities.

He kept a handful of his last Holstein heifer calves once his Holstein dairy cows were sold, and then he bought an Angus bull. This was start of his beef cow herd, which we still have today.

We, too, have a few interesting farming artifacts in our old shed but nothing as cool as a vintage milking machine.

We have about 10 metal milk cans, which I believe held 10 gallons of milk each. From what I have learned, most dairy farms would have two sets of milk cans. One set went with the milkman full of milk, while another stayed on the farm to be filled until his return and the set of cans were swapped out.

Somehow, a large glass bulb from my grandparent's milking parlor has survived three farm moves over the last nearly 50 years and is on a shelf in our one shed. As my dad tells it, the milk flowed from the milkers on the cows through the lines and through this glass bulb before the milk ended up in the bulk tank in the other room.

We also have a bucket with thin chains with a brown number tag on each chain. I guess my grandpa bought some Guernsey cows in the late 1950s, and these cows had these chain ID tags on them when he bought them.

Again, nothing like an antique milk machine but still dairy items I thought have always been kind of interesting.

I would love to hear what interesting vintage dairy items you have. Please send me your stories, and we will run them in future columns. 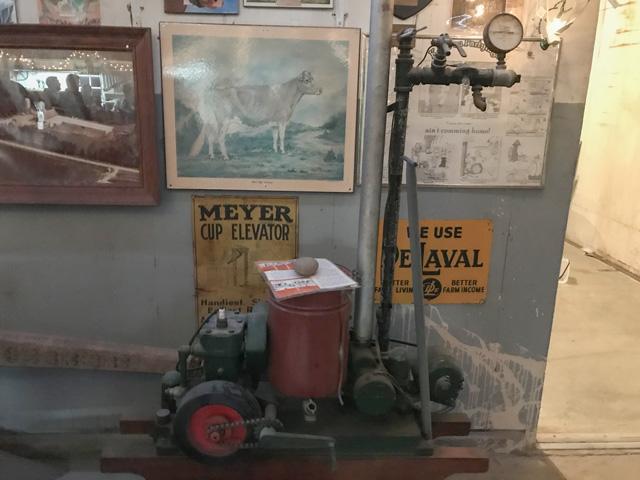