Water levels on the Lower Mississippi River (LMR) are dangerously low in some areas and may slow or even stop barge traffic just as corn and soybean harvest starts. Most of the fall export business is for soybeans at the U.S. Gulf and the persisting low water can be problematic for shippers who need to move the new-crop harvest down river.

The USDA noted in their weekly Grain Transportation Report for the week ended Sept. 17, barged grain movements totaled 209,600 tons. This was 16% more than the previous week, and 130 grain barges moved down river, which was 25 fewer barges than the prior week. Some of the slowdown can be attributed to a late start to the southern harvest and slow movement down the LMR.

Demand at the Gulf has been bid triple digits for spot top quality soybeans barges all month, with guaranteed arrival dates at the Gulf. As of Sept. 23, the barge market was still inverted with the balance of Sept. bid at +170X. The first-half October was bid +145X and the last half was bid 134X. And, given the reduced barge drafts and the surging barge freight values as harvest picks up, those basis values are strong for this time of year.

A normal draft -- the distance between the waterline and the deepest point of the boat -- for a barge when river conditions are good is about 12 feet at 1,500 tons. On the Illinois, barges are regularly loaded to about a 9-foot draft at 900 tons. Each foot of draft that is reduced means a barge's cargo is cut by 200 tons and will cost shippers money as they are paying the same amount of freight to ship less. In addition, that will create the need for more barges to pick up the slack.

American Commercial Barge Lines reported Sept. 23 that draft reductions have been implemented from Cairo, Illinois, to Greenville, Mississippi, at 10'6" max and Greenville to the Gulf at 11'0" max. Northbound drafts have been reduced to 9'6". "Hearing docks may see further loading draft restrictions locally, some reportedly at 7' max. Tow size has been cut back resulting in a 12% to 15% reduction in tow size."

According to ACBL, groundings have been driving intermittent closures of 12 to 36 hours over the past two weeks. "U.S. Army Corps of Engineers is engaging additional buoy boats to improve navigational aids as well as two dredges. Expect these issues to continue well into October based on forecasted precipitation. Industry is holding off U.S. Coast Guard request for further draft and tow-size restrictions."

"Overall, the forecast leans dry for the entire area east of the Rockies until we get to December," said DTN Ag Meteorologist John Baranick. "Of course, we'll get some events in that time frame where some heavier rains will occur, but the prospect for widespread heavy rain across the basin that would raise river levels is rather low and probably depends on whether or not a tropical storm or hurricane moves through any of the basins."

So far, the U.S. has ducked those tropical systems, but Baranick said he's keeping a close eye on the tropics. "Tropical systems bring lots of heavy rain in a short period of time and if they penetrate deep enough into the country, can raise rivers quickly. Hurricane Ian is going to stay over the Southeast and MidAtlantic later this week and will have no impact on the major river systems. But we're still in peak hurricane season for another few weeks and a direct hit could change the landscape."

Baranick added, "During the wintertime, if we do end up with better precipitation, it takes quite a while to get it into the main rivers like the Ohio, Missouri, and Mississippi. And by that time, soils in northern areas are freezing up and locking away any moisture they have, storing it on top in the snowpack or ground ice. It may take until next spring's melt to get the rivers back up again in any significant way."

Remember the recent talk about piping water from the Mississippi River to the drought-stricken West? The Bureau of Reclamation did a thorough study of the idea of pumping Mississippi River water to Arizona in 2012, concluding that the project would cost $14 billion (in 2012 dollars) and take 30 years to complete.

Besides the cost, counting on the Mississippi River to help out in years like right now would be impossible given we currently don't have enough water in some parts of the river to keep our fall harvest bushels safely moving downriver.

Here are links to some of the lowest spots on the LMR and tributaries that meet up with the Mississippi River. 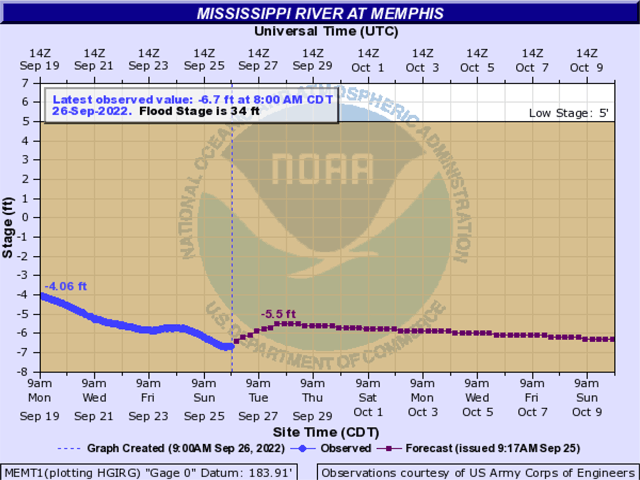