The last of November into early December has seen much more favorable conditions develop for harvesting the wheat crop in eastern Australia. In early November, heavy rain and flooding caused extensive harvest delays, crop quality decline and even some out-and-out loss in the wheatfields of New South Wales and Victoria states in eastern and southeastern Australia.

But the pattern has changed since mid-November, and the first half of December has a drier outlook as well. This change has been noted in wheat harvest progress and in wheat markets in Australia. Grain Central market writer Liz Wells offered these details following the trade session Thursday, December 1: "A CHARGE on harvest in New South Wales under mostly clear skies has seen a flurry of selling activity in the past week that has enabled most consumers to get covered into the New Year," Wells wrote. "The Victorian harvest has also cranked up, and to everyone's delight, rainfall recorded for both states in growing areas in the week to today has been minimal at most."

Sea surface temperature and atmospheric features in both the Pacific Ocean and the Indian Ocean appear to favor this drier trend. In the Pacific Ocean, La Nina conditions are still present, with generally below-average cooler temperatures in the central Pacific basin -- a feature that supports above-average rain in eastern Australia. However, the trade wind portion of La Nina, as indicated by the Southern Oscillation Index (SOI), has shown a weaker trend recently. In addition, the Indian Ocean dipole, which had been negative over the past several months and helped to send in heavy rainfall to eastern Australia, has tended toward a neutral phase. "The latest Indian Ocean Dipole (IOD) index value, for the week ending 20 November 2022, was â??0.06 degrees C; within neutral bounds. The IOD index value has been within neutral bounds (between â??0.4 deg C and +0.4 deg C) for three consecutive weeks, and if it remains at these levels over the coming fortnight, the event will be deemed to be over," stated a summary by the Australia Bureau of Meteorology on Tuesday, November 22.

The better harvest prospects were reflected in USDA's projection for Australia wheat production in the November WASDE report. In the summary of international production estimates, the report noted "(wheat) Production in Australia is raised 1.5 (metric) tons to 34.5 million as above average rain over the past month supported crop development and boosted yields, following widespread favorable conditions earlier in the growing season."

Flooding is still an issue in much of eastern Australia, despite the drier trend. "Major flooding continues along the Murray River and in many rivers in inland New South Wales," the Australia Bureau of Meteorology stated on Thursday, December 1. 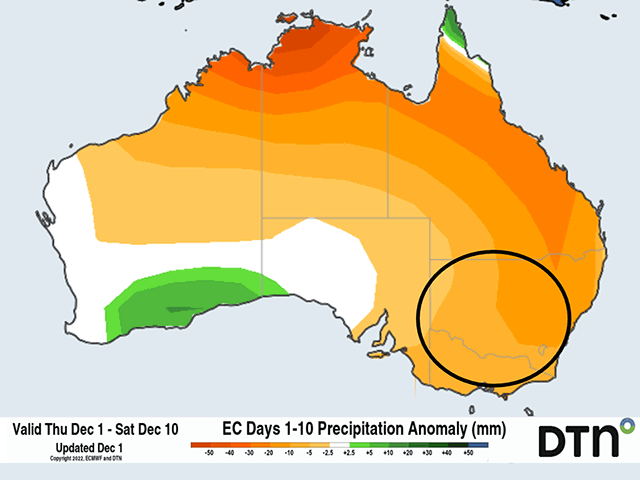