BEIJING (DTN) -- There are very diverse survey reports in China recently, showing the disagreement of different organizations in corn crop acreage, but most of the reports showed that Chinese farmers may have cut more corn acreage.

If the low end of analysts' forecasts are correct, that could put China's 2017-18 corn ending stocks at 66 mmt to 71 mmt (2.6 billion to 2.8 billion bushels). If that holds, it would be the smallest ending stocks in China since at least 2011-12. And China's demand has grown substantially since then, noted DTN Senior Analyst Darin Newsom.

"Given all that, I could see a situation where China would need to import more corn or DDGs," Newsom said. "A good time for the U.S. to start a food fight, particularly with China pouring money into building Brazil's infrastructure."

The Chinese Ministry of Agriculture said China planted 88 million acres of corn this year, a decrease of 2.9 ma, or 3.2% less than last year's 91 ma. With this acreage, the Ag Ministry is expecting the country to harvest 8.35 bb, or 212 mmt of corn this year.

If that holds, Chinese farmers would average just under 95 bushels an acre.

However, other field surveys showed a deeper acreage cut than the Ag Ministry estimates.

China Corn Industry Technology System, a corn research organization in Chinese Academy of Agricultural Science, did a field survey at the end of April in the planting season. The results showed that Chinese farmers will lower their corn acreage by 10.9% in average, which would come to about a 9.9 ma decline.

That would put Chinese corn production at about 7.7 bb.

A recent survey done by Dalian Commodity Exchange (DCE), which took place in the second week of June, showed that more corn acreage had been switched to ether soybean or rice this year. They reported that the total acreage decrease will be around 15% to 30% in Northeast China, where more than one-third of China's corn is produced.

"Because the farmers are in small scales (mostly less than one acre), the work of data collecting and processing is hard in doing rural statistics," said Dr. Wenge Fu, Professor of China Agricultural University. "Government data is mostly conservative in term of changes while other organizations tend to focus on the changes of the industry. This will lead to some disagreement in planting acreage data."

Dr Fu added that some private companies and organizations do not have the resources to do a survey to cover the whole country. That may be another reason for the disagreement in results. "China is a big country with a huge diverse in corn production," said Fu.

Zhaoshang Futures, a brokerage company based in Beijing, pegs the corn acreage at about 85.5 ma. "Our estimation is that the total acreage decreased 6% in the country," said Zhonghua Wang, a Zhoashang analyst. "This estimation is based on our survey as well as information from corn seed distributors."

The Ag Ministry has a tradition of reporting higher acreage, said Wang. "The ministry said last year that the corn acreage was down 3.6% compared to previous year, but the industry believes that the actual data should be 8.1%."

Adding acreage declines over the past two years, the industry believes China's corn acreage is about 10.5% lower than 2015, Wang added.

Wang estimates that corn output will be 7.9 bb to 8.1 bb (200 mmt to 205 mmt) this year, based on the current acreage and crop conditions, this is also less than the report from Ag Ministry.

China corn production could be divided into three parts: 50% spring corn, mostly in northern China; 40% summer corn (second crop) in the middle of the country; and 10% tropical corn in south China.

Most of the summer corn acres are planted after wheat and rapeseed harvest.

The corn crop in northeast China also was facing drought conditions before this past week, but then some good rains came that changed the situation. "In the middle of the country, though farmers are still planting summer corn, some early planted crops are in very good conditions," Wang said. 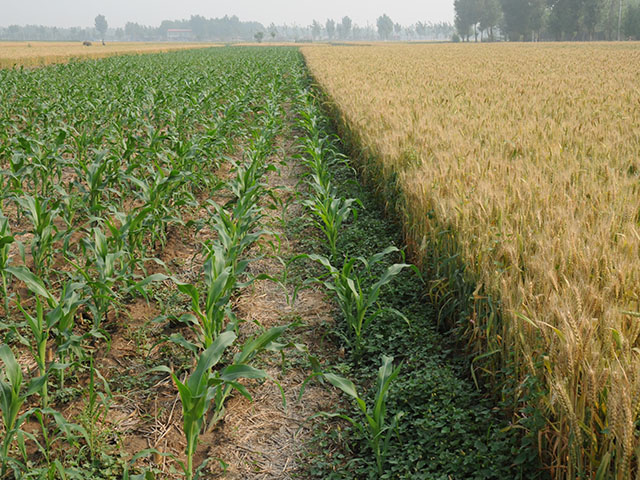