DECATUR, Ill. (DTN) -- Dicamba herbicide could have its own mini-series in the state of Arkansas. The question of whether to ban in-crop use of dicamba for the remainder of the growing season will be back on the table in the state on June 23 because of a voting discrepancy.

Tuesday, June 20, it initially appeared Arkansas State Plant Board (ASPB) did not have enough votes to carry the measure, despite eight members voting for the dicamba ban and six against the proposal. It was assumed nine yes votes were needed for passage since there are 16 voting board members on the 18-member board.

As an alternative measure, the group then decided to recommend tacking additional application restrictions on Engenia, the only dicamba product that can be legally sprayed over the top of soybeans and cotton in Arkansas. The ASPB voted 11 to 3 to require applicators to use hooded broadcast sprayers when spraying Engenia and increased the downwind buffer to 1 mile (originally 0.25 mile).

However, soon after the special session adjourned, the vote on the proposed ban was called into question when it was realized that only 15 voting board members had participated in the meeting either in person or by phone and that the original 8-to-6 vote should have carried the measure. Adriane Barnes, communications director for the Arkansas Agriculture Department, told DTN via email it was then decided that the board would re-vote to consider a ban of in-crop use of dicamba due to this "procedural error."

The follow-up meeting is scheduled for Friday in Little Rock. Any proposal that might be passed would require the signature of Arkansas Governor Asa Hutchinson.

While the actions would apply to Arkansas farmers only, the drama is being closely followed on many fronts. Dicamba drift complaints in 2015 and 2016 were often blamed on the fact farmers were able to plant dicamba-tolerant varieties, but had no low-volatility dicamba herbicide available to use in the crop.

Arkansas took a harsher line than other states when the Environmental Protection Agency (EPA) finally approved new herbicide formulations for the 2017 season to be used with what is known as the Xtend cropping system. The state cut off the use of DGA-based dicamba herbicides (XtendiMax and FeXapan) after April 15 until more studies could be conducted. Engenia was sanctioned because it had weathered university testing. Arkansas also required mandatory applicator training, extended Engenia buffer zones around the entire field at application and established a 0.25 mile downwind buffer to sensitive crops.

"The thought during development of these restrictions was an attempt to minimize the amount of injury from off-target movement this season," said Tom Barber, University of Arkansas weed scientist. "Unfortunately, that has not been the case."

At end of day June 20, the Arkansas Agriculture Department (AAD) had received 141 dicamba misuse complaints. Arkansas farmers told DTN herbicide spraying is likely to continue for the next week or so and that the crop is late in some regions after being replanted due to flooded conditions.

It generally takes one to three weeks for the cupped soybean leaves characteristic of dicamba injury to appear. How much yield loss is associated with injury depends on the dose the plant receives. In the case of soybeans, plants injured in the reproductive stage have larger yield losses, but may have less visual injury. Tomatoes, peanuts, sweet potatoes and many other plants are also highly susceptible to the herbicide.

Reed Storey, who farms near Marvell, Arkansas, traveled to Little Rock to testify in support of the ban on Tuesday. He had 600 acres of soybeans damaged by dicamba drift last year that amounted to an estimated $70,000 in unrecoverable losses.

Storey said he planted some Xtend soybean varieties this year as a defense mechanism in fields where he knew neighbors would be spraying dicamba nearby. "I don't intend to spray dicamba on my own fields, but I paid for the protection against drift," he said. While those fields got by unscathed, he has already found dicamba-puckered-up beans in some of his other fields that did not contain the trait protection.

He said he understands why farmers that chose to pay for and plant varieties containing the Xtend technology would prefer not to be told they can no longer use the tool. Without dicamba, they are limited to glyphosate and PPO-inhibitor post-emergence options and tough-to-control weeds like Palmer amaranth have shown an increasing ability to resist those types of herbicides. "However, if we all start planting Xtend, that technology will likely become resistant too," he said. "And I really don't want to be forced to plant a technology to protect myself."

The ASPB allowed eight testimonies -- four on each side of the proposal for a temporary ban, according to Terry Walker, ASPB director. Additional written comments were received from farmers and citizens and presented to board members regarding the emergency proposal for 120-day halt to dicamba spraying.

On June 19, the state of Missouri was reporting 52 pesticide misuse complaints statewide for the year. As of June 20, the Mississippi Department of Agriculture and Commerce told DTN it was investigating 28 complaints of suspected off-target movement of dicamba, compared to 13 cases in 2016. 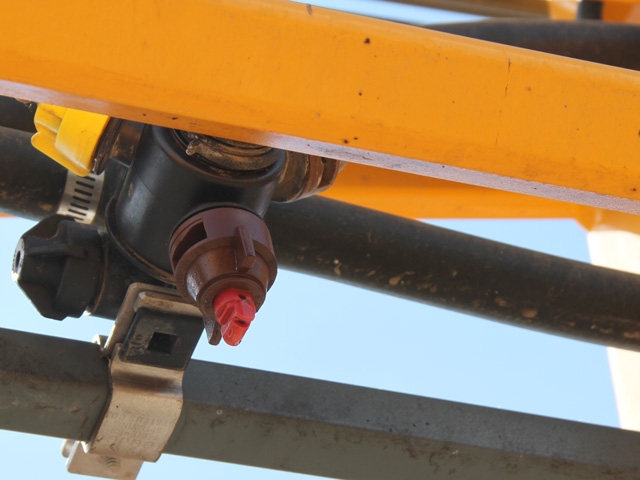