Ten years ago, the husband-and-wife team bought 200 goats to help clear a new bull pasture. Despite conscientiously using the globally recognized method of eye-scoring to check for parasites, they lost goat after goat when dewormers didn't work. Concern grew they would see the same thing happen in their cow herd without taking the right steps to prevent resistance.

Following the lead of Navarre, Extension veterinarian for Louisiana State University (LSU), the Woodville, Mississippi, couple incorporated a new approach to parasite control into their cattle operation. Their revised tactic to deworming focuses largely on, well, not deworming. At least not deworming by the calendar.

"We're trying to break the habit of deworming," Cooper explains. "We strategically deworm first-calf heifers. They're trying to rebreed, they're losing their teeth, and they're still growing. So, we'll deworm them after their first calf but before they rebreed."

For weaned calves, deworming depends on whether they stay on the farm for preconditioning. Typically, the Hursts retain ownership of calves through harvest. Calves often go to Texas or the Flint Hills of Kansas to gain on grass before heading to the feedlot. In the stockering phase, deworming is likely but not automatic.

The Hursts stress that their internal-parasite-control program for the herd is part of an overall system that includes rotational grazing, adapted genetics and stockmanship. The headliner is forage management.

"It is a big help in internal and external parasite control," says Hurst of their forage-management program. "The paddocks have a long rest and recovery stage, never less than 30 to 40 days and as long as 90 to 100 days. That helps break the life cycle of worms."

When they do hatch, parasites struggle to climb more than 3 or 4 inches up a blade of grass. So, the Hursts try to keep forage at least 6 inches high. That means cattle aren't ingesting parasites as they graze.

To make their grazing program as efficient as possible, they often run their cow herd in one group -- about 225 to 250 animal units. At times, they add in the replacement heifers and stockers. Stocking density runs from 30,000 pounds to 150,000 pounds an acre. Temporary electric fencing reduces the time it takes to set up and take down paddock fences and move cattle.

The Hursts usually move cattle daily, sometimes two or three times a day. It all depends on grass height and cattle condition.

"A lot of people say it is too much work. That's not true at all," Katie says. "It is so easy. It takes us 15 to 20 minutes to build a paddock and move the cattle."

"They're waiting at the gate," Cooper adds.

The Hursts have practiced high-density grazing for 12 years. During that time, they've seen positive changes beyond parasite control, including hay use. They're currently down to one roll of purchased hay per cow per year.

"We can easily get to January on stockpiled bermuda, bahia, dallisgrass, johnsongrass and broadleaf signal grass," Cooper says. "And, every forb known to man," Katie adds.

In December or January, they supplement cows twice a week with 1 to 2 pounds per head of cottonseed pellets. Replacement heifers get a pound of pellets a day. At this point in the year, cattle will be grazing winter forages, some broadcast and some drilled. These typically include ryegrass, cereal rye, hairy vetch, oats, triticale, peas, clovers and brassicas.

In addition to saving on hay, the Hursts say they haven't used any synthetic fertilizer since starting AMP grazing. They simply rely on the manure and urine of the cattle to supply the pastures' fertility needs.

"Our costs have gone down exponentially," Cooper says.

In addition to their carefully managed grazing system, the Hursts are changing the genetic makeup of their herd. Members of U.S. Premium Beef, they were used to high percentages of Prime and Certified Angus Beef with their growthy commercial Angus calves. However, they didn't feel those cattle fit their lower-input system and have been converting to a Red Angus-South Poll cross. South Poll cattle are smaller, more heat tolerant and a quarter each Barzona, Hereford, Red Angus and Senepol.

Three years into the genetic shift, there are challenges. Many of their cows are still black and can't handle their 45-day breeding season, which they've changed from the cooler months to June and July. The shift was to ensure the herd was calving during peak forage availability. Conception rates dipped below 80% last year. Those females that didn't fit the new system are being moved back into a fall calving and breeding season, and sold.

While the Hursts give a great deal of the credit for their reduction in the use of dewormers to their grazing system, LSU's Navarre notes that a rigid, scheduled approach to rotational grazing can actually make parasite problems worse. Parasites may have a 21-day life cycle in the lab, she explains, but that may not be the case in the pasture.

"That 21-day cycle is if you have consistent rainfall and a consistent temperature," she says. "If you're set on rotating every 45 days, for example, then depending on the rainfall, those worm eggs may not hatch at the same time. If it is dry, and then it rains, they may hatch all at once, and you may end up turning cattle in when the parasites are most active. There is no magic formula. Rotate based on your grass conditions, and monitor parasites with fecal egg counts.

"You have to be flexible enough in your management to deal with weather extremes and changes in your environment," Navarre explains. "Be prepared to step in and rescue animals with purchased feed or animal health products, if needed."

Who ever knew there was such a thing as a good internal parasite? Common sense tells us to kill every one of the nasty little creatures. But, believe it or not, Louisiana State University Extension veterinarian Christine Navarre says you can do your parasite-control program a favor by letting a handful slither by.

Navarre explains, "What we need is some of these refugia, or good worms, to be in the population with the bad worms. They breed and dilute those resistant genes. Resistance is still going to happen, but we're slowing it down. If we deworm an entire herd, and we don't have any refugia left, the resistant worms are all going to breed, and all we come out with are resistant worms."

How do you know how many parasites live and how many die from your dewormer? You can take the scientific approach and collect fecal samples from part of your herd, around 15 to 20 animals, and have your veterinarian do a fecal egg count (FEC). Then, deworm the herd with your usual dewormer, and two weeks later, take fecal samples from the same cattle, and do another FEC.

"We would like to see the count drop by at least 95%, or 99% if you're using two classes of dewormers together," Navarre explains. The challenge is there is no set formula to correlate resistance numbers and the number to leave untreated to serve as refugia-makers. She notes, however, that once you have your test results, she has recommendations based on the data.

Ideally, with mature cows, you can skip deworming altogether. If they're healthy and getting enough good-quality groceries, these mature girls will generally develop resistance to internal parasites. This means the whole herd can serve as refugia-makers.

The exception is likely among young cows, those hit by drought or a particularly nasty winter, and cattle with quite a bit of Brahman blood, which for some reason don't seem to be as resistant to internal parasites as other breeds. Bulls are also an exception and do need to be dewormed regularly.

With your weaned calves and/or replacement heifers, leaving refugia can be as simple as skipping the dewormer with every 10th calf that comes through the chute. If the 10th one happens to look kind of peaked, deworm it and skip No. 11 instead. Or, better yet, skip the heaviest 10% if you have weights on them.

If you want proof that a refugia program works in beef cattle, Navarre says you're not going to find much information.

"We have limited research data and computer-modeling studies in cattle. We just don't have very much data from long-term field trials," she says. There was a study in Argentina where researchers actually gave refugia to cattle that harbored parasites with a high level of dewormer resistance. Navarre reports that over time, they actually reversed some of the resistance in the herd. 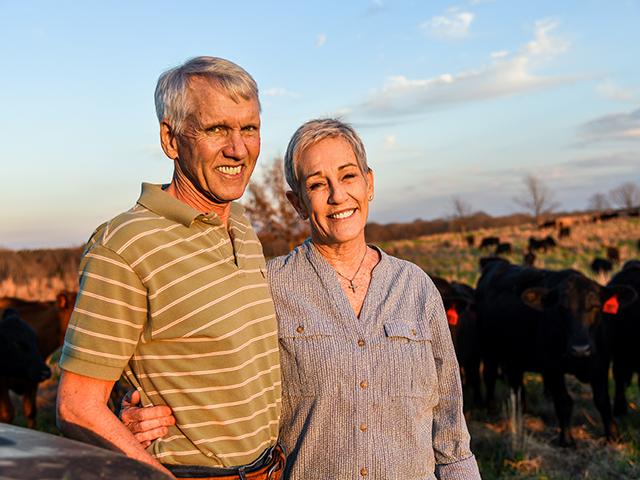