Jorgensen Land and Cattle, Ideal, South Dakota, raises the most cost-effective bushel, not the highest yield. It's accomplished through an innovative agronomic system developed by Bryan Jorgensen that focuses on increasing soil health through crop rotation, no-till, cover crops and livestock to optimize every ranch resource. This prairie ecosystem efficiently recycles roots, crop residues and organic matter into carbon and nitrogen that feed crops. It also hones their cropland acres' efficiency and profitability.

The MBA grad and enterprise CEO designed and implemented a whole-farm recordkeeping system tracking every operational aspect. It's all designed to help measure and track soil health's return on investment.

"What impresses me about this operation is the efficiency increase," says Jerry Hatfield, director emeritus of the National Laboratory for Agriculture and the Environment, and authority on soil-health return on investment. "The Jorgensens take full advantage of converting water and sunlight into grain or beef.

"Another key is how more available nitrogen and water (from healthier soils) have stabilized their yields over time so there is less variation among years," he adds.

The result is a soil-health environment that provides rich returns. Here is some of Bryan Jorgensen's math on profits/savings from soil health:

-- Organic Matter Matters. Each 1% increase in soil organic matter captures 20 to 40 pounds per acre N, saving that much in purchased fertilizers. Increased soil biology releases more nutrients for plant uptake. Soil microbes are fueled by soil organic matter (carbon) from the diverse crop rotations and cover-crop mixes. "Carbon is the framework and fuel of every living thing," Bryan Jorgensen says.

The Natural Resources Conservation Service (NRCS) calculates that each 1% increase in soil organic matter releases $15.70 per acre worth of nutrients annually.

-- Higher Water-Holding Capacity. Each 1% increase in soil organic matter enables soil to store an additional 1 inch of moisture (more drought insurance and less runoff). "Our soil water-holding capacity's improved to where we get three alfalfa cuttings without irrigation," Bryan Jorgensen says. The farm has dryland alfalfa yields of 3.5 tons per year. Average annual rainfall is 24 inches but ranges from 15 inches to 33 inches.

-- Higher Yields. Crop yields have doubled and sometimes tripled since the family abandoned its wheat-fallow system in 1991. Dryland corn now averages 110 bushels per acre compared to 65 bushels before the switch (168-bushel dryland corn yields "when it rains"). Soybean yields average 35 bushels per acre in contrast to 15 bushels in 1991. Winter wheat yields are up to a 65-bushel-per-acre average versus 35 bushels in 1991.

"Some would credit yield gains to improved crop genetics," Bryan says. "But, the milo genetics we use haven't changed since the 1980s. Improved soil health has doubled our milo yields from 55 bushels to 110 bushels per acre."

The prairie ecosystem the Jorgensen Ranch has mimicked "is the best way to convert the sun's energy to carbon efficiently, as native prairie plants have for billions of years," Bryan Jorgensen says.

The cover crops are free total digestible nutrients (TDN) for JLC's 5,000-head herd. Cattle graze them and wheat stubble for three to six months. This amounts to a $160-per-head savings, or nearly $100,000 in 2020 aggregate savings without hurting yields.

Nick Jorgensen calculates this costs the ranch $1.06 per head per day compared to $2.75 per head daily on feedlots. The grazing ration's a low-energy, higher-protein, forage-based ration, 45 megacalories versus 62 megacalories in a feedlot.

The Jorgensens seed cover crops into winter wheat stubble immediately after harvest. Cattle graze on the low-cost cattle feed -- a mix of oats, rapeseed, peas, turnips and radish during the winter. The following spring, they plant corn into the cover-crop residue.

In a replicated Jorgensen ranch case study, half of a 160-acre winter wheat field was planted to cover crops, and the other half wasn't. The cover crop increased soil organic matter by 0.5% in just one year, or 10,000-pounds-per-acre residue (free forage and N).

Soil tests revealed that the fields with cover crops:

The Jorgensens raise dryland corn on 70 to 80 pounds per acre of N applied at planting side by side. "We know our maximum return to N -- the point where 1 more pound of N doesn't deliver the same profits," Nick Jorgensen says.

-- Cover crops captured an additional 55 pounds per acre of N compared to the non-cover crop land.

-- The cover crops captured 10 pounds per acre of N on the wheat stubble not found on the non-covers. The P1 levels on the cover-cropped ground were nearly double those of the non-cover ground.

-- The Jorgensens have reduced N and P rates by 70% under the prairie system.

Bryan Jorgensen finds that soils with more than 3% soil organic matter require very little supplemental nutrients. "When we take over new ground, it takes about five years to activate soil microbes by mimicking the prairie ecosystem."

Nick Jorgensen's ROI calculations "enable us to forecast the crops we need to raise the feed we need and plan rotations," Bryan Jorgensen says. "This is possible by tracking feed inventories daily with portable iPads. That data ties into accurate yield and cost data.

"We also benchmark our agronomic data against our historical performance to see efficiency trends: What have we done that specifically raises profits under various scenarios?" he concludes. 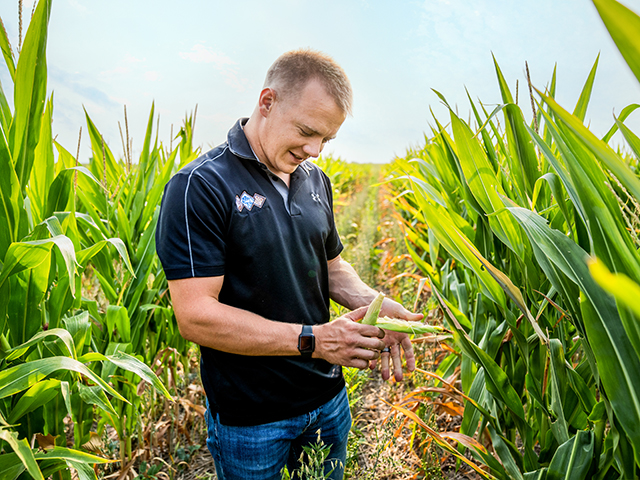