The farmers working to build healthier soils don't all go about it exactly the same way or at the same pace. However, there is general agreement among experienced farmers and soil-health specialists about the basics required to reach soil-heath goals.

"Building soil health requires a systems approach," says Fuhrer, who has been advocating for soil-health practices for more than 20 years. "It's not a single practice. So much of what I've seen is operations applying one or two principles, then being unhappy with the results and giving up. The people with the most success in regenerating low-producing soils are committed to following all five soil-health principles."

Here's how five North Dakota farmers are working to put those five soil-health pillars into practice:

Dana Fletcher, a small grains, pinto beans, soybeans and corn grower from Stutsman County, in eastern North Dakota, has been transitioning to no-till and uses cover crops to armor his soil.

He was several miles away from his farm the day he knew his system was providing protection from the elements.

"I saw a dust storm and hopped in the pickup to see what was happening on my land. My rye cover wasn't super high or thick, but it was big enough to hold the soil," Fletcher says. A neighboring pinto bean field without a cover crop wasn't as lucky, he recalls.

"This system makes farming interesting for me now. I think we're doing something good with this."

After more than 40 years, Rocky Bateman still has a vision in his head of the lesson he got in soil disturbance just after he bought his farm in Morton County, North Dakota.

"I was driving toward home in 1974 and saw huge clouds of soil blowing from 10 miles away. I got closer and saw it was my new farm," he recalls. "That farm was tilled to death. If you're tilling, even if your yields are going up, the health of your soil resource is declining. I was farming marginal soils, and my banker said I needed to consider quitting the farm 20 years ago. But, we switched to no-till instead," Bateman says.

He explains the organic matter content of his farm was .7 to .9% back then, but no-till and cover crops have helped grow those numbers to 4.5 to 5% across the farm. "There's an initialization period for no-till -- you might have to add more fertility early on," Bateman adds.

"Don't stop after five years, though -- you'll start to get paid back in better soil aggregation, and higher yields will come. But, remember, if you work the land after you start no-tilling, it takes you back to the beginning, and you have to start all over again. To me, you never want to till again. That should be your mindset."

"We put cover crops in after we combine wheat, lentils or peas," says Aaron Steckler, of Morton County, North Dakota.

"We use different mixes. We might use oats, turnips, vetch and radish, or we might use sudan, millet, turnip, radish, lentils, red clover and kale," he explains. Pheasants, grouse and deer all respond to broader mixes, as well.

"Diverse plantings give us that armor, continual live-root growth and livestock feed that all contribute to healthier soil," Steckler adds.

He likes to leave 8 inches of cover-crop stubble as additional protection for the soil and grazes cover crops in the fall and spring.

"We used one or two species the first few years but learned a diversity of cover-crop species is much better," Wilson says. He prefers to plant green and likes the advantage of driving on living cover crops when seeding soybeans.

"We used to get stuck a lot but not now, and our fields aren't muddy," he says. "That's because we've built soil structure."

That release of nutrients happens to the fullest extent when the living roots that feed the soil web are growing in the late fall and early spring, Fuhrer adds. Soil building comes to a halt in a corn/soybean rotation when there are no live-root exudates to feed the soil food web.

Morton County farmer Travis Wolf counts on his cows to pay for his cover crops. "We can pay for a $55-per-acre cost of high protein cover crops in 18 days of grazing if we have knee-high and thick cover crops," he says. "We've found we can get 27.9% crude protein from cover crops -- our cows use the cornstalks for fill and the cover crops for nutrition, and they get exercise, too."

The economics of extra livestock feed from cropland acres has made using cover crops a no-brainer for most livestock producers. But, NRCS's Fuhrer says the natural synergism of plants and animals also benefits the soil ecosystem.

A PLACE TO PRACTICE:

While soil health may seem like a new concept, Jay Fuhrer says it has a longer history than you might think.

He watched the beginnings of a transformation to soil health in Burleigh County, North Dakota, in the early 1990s with the forming of a local soil-health team.

At the time, the five soil conservation district supervisors on the team converted their own operations to no-till. Fuhrer estimates 75% of the county's farmers now use no-till on all their acres.

"We all agreed we could no longer accept a degrading soil resource. We wanted our soil to do much more than simply hold up a growing plant. We came together and began educating ourselves on soil health one issue at a time. We'd look at how to build organic matter, then how to eliminate soil compaction and how to get the soil to hold more water," Fuhrer recalls.

Ten years later, the introduction of "cocktail" combination cover crops, a switch from three to four pasture-rotation systems to 25 to 30 pasture systems and the integration of livestock into cropping and cover-crop systems have brought a dramatic change in the potential for soil building.

The Burleigh County Soil Conservation District supervisors felt so strongly about the role healthy soils could play in agriculture that they borrowed money to buy a farm in 2009 to specifically demonstrate and learn more about the principles of soil health. 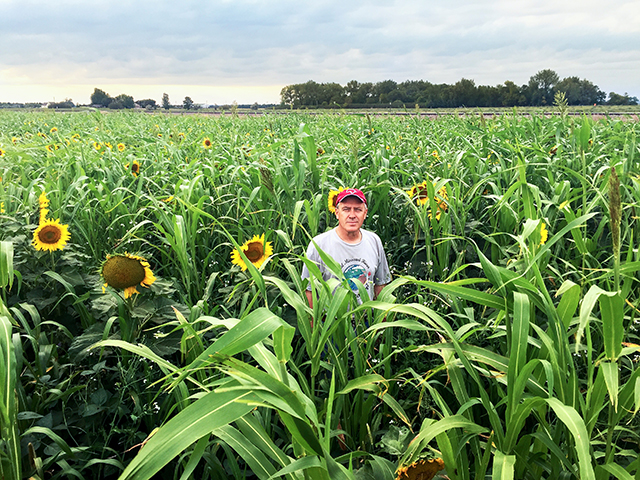