For 60 years, Herefords ruled at Tri-Star Stock Farm. But, urban sprawl and land in the $6,000-an-acre range put some serious, real-world expansion limitations on a young Tennessee couple who call this area just outside of Munford home.

Jeremy and Peyton Fair both grew up showing cattle and admit they hold a lot of nostalgia for the industry. But, squeezing a herd of cattle onto 11 acres proved impractical and self-limiting. So, the couple took a leap into the unfamiliar world of Tunis sheep. It's a heritage breed making a comeback, and the Fairs are in a good spot to be leaders in the growing industry.

"We felt there was an opportunity to position ourselves to raise quality stock folks would see as replacements and also as show animals that could be marketed locally to 4-H and FFA members," Jeremy says of their flock. "This county has three active FFA chapters, and all of them have livestock programs where students own and show livestock."

Peyton says they started with four Tunis ewes and one ram in 2015. They quickly went to 21 brood ewes and three rams, with a goal of reaching a 30-ewe flock. That will put them past the average flock size in the U.S., which is between 15 and 18 ewes.

The couple have found a positive reception among sheep producers, she explains, with lots of leadership opportunities even for those with small flocks. She is secretary on the board of directors for the National Tunis Sheep Registry and a region director. "We feel there is opportunity within these organizations for smaller producers. It's exciting to feel you're involved and making a difference."

In addition to raising breeding stock and show animals, the Fairs are looking for a way to sell lamb directly to Memphis-area restaurants. There are limitations now because there is no USDA processor in their area for locker lamb. Without a USDA inspection, the Fairs can't sell to restaurants.

"Right now, that is a roadblock," Peyton explains. "We've had some restaurants talk to us about direct purchase, but lamb has to be USDA inspected, and our facility doesn't do that yet. We hope that changes soon."

There are a number of important production and management differences between raising cattle and sheep. Jeremy says fencing modifications and pasture rotations have been key because of the grazing nature of sheep. Peyton adds they've created smaller paddocks, ranging from one-eighth to one-fourth of an acre, for the sheep to rotate more to maintain forages and help manage parasites.

Increased parasite and resistance issues are a common challenge for sheep producers, and the Fairs have been no exception. "We see the same parasites in sheep that we did in cattle," Jeremy notes. "There are roundworms and intestinal stomach worms. Both are subject to coccidia. But, barber pole worms are specific to sheep, and we fight them constantly. It's a challenge, and right now, we are relying on a lot of hay to help with the worming control. Sheep tend to graze lower, which will just reinfest them; so we feed them hay when we need to give the pastures time to recover."

In addition to close grazing management, Jeremy says sheep are dewormed every other month, with active ingredients in dewormers alternated to help with resistance management.

Parasite control is especially hard for small ruminant producers, says Ray Kaplan, professor of parasitology at the University of Georgia. One of the most difficult parasites to control is Haemonchus contortus, or the barber pole worm. This blood-sucking parasite thrives in heat and humidity, and can cause fatal cases of anemia and bottle jaw in small ruminants. Kaplan notes the worm has developed strong resistance to dewormers around the globe.

"Just deworming doesn't accomplish much anymore," he says. "There is a tremendous amount of drug resistance, and many commonly used products just don't work. If what you're using doesn't work, you can't get ahead of the parasite."

Today, Kaplan says the recommendation is that all sheep and goat producers base worm treatments on FAMACHA eye color chart scores to help manage resistance. The test was developed by South African livestock parasitologist Francois Malan and consists of a plastic card with five high-resolution photographs of the eyes of infected goats and sheep (rating 1 through 5). The photos focus on the shade of redness inside the eyelids and show animals at specific stages of infection, with a 5 representing severe anemia.

These red-headed sheep are medium-sized, calm and a favorite today of many in the sheep business. The National Tunis Sheep Registry is a clearinghouse of information on the breed, as well as breeders across the country. Some little-known facts about Tunis include:

> Feed-efficient, they produce marketable lambs at the same weights as other breeds in similar time frames.

> These sheep excel on pasture and are a cross between Middle Eastern fat-tailed sheep and American sheep.

> Tunis are among the oldest breeds of livestock developed in America, going back to 1799. 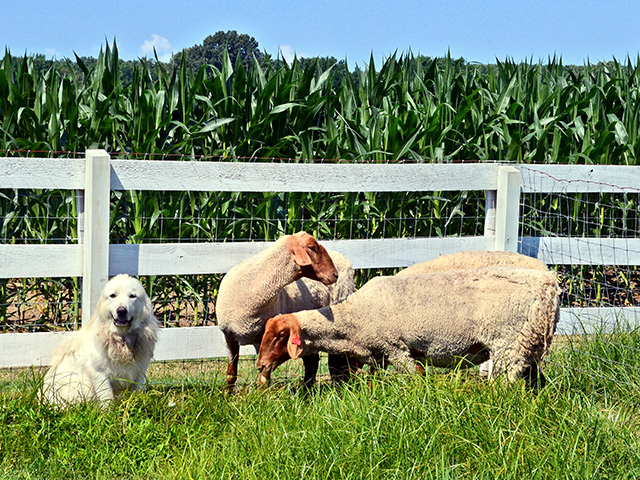