There's one vision of the future of drone use in agriculture that involves half a dozen, maybe more, aerial multirotor drones buzzing over a field to spray, finishing the task by virtue of numbers rather than size. It's an idea already being tested and considered by a handful of companies around the world.

Another vision sees that size/number relationship a little differently, instead focusing on large aerial drones capable of doing the job themselves -- and fast. There, too, technology companies are beginning to make their bid for what the future may look like.

Pyka looks and acts more like an aerial-drone adaption of a traditional crop duster than it does a four- or six-propeller drone, albeit with electric engines rather than a plane's gas engine. The company is set to debut its newest model this autumn, and it promises speed, efficiency and cost benefits by using a tri-engine drone airplane with a 38-foot wingspan. The plane should be able to spray up to 135 acres an hour, including time to swap out batteries and refill the spray tank.

The company has lined up certification in New Zealand. It has been testing there for a year, logging more than 10,000 miles flown spraying herbicides, insecticides and fungicides on wheat, potatoes, kale and radishes.

Licensing in the United States is more complicated, and Pyka anticipates starting on the West Coast to spray diverse crops. It could be several years before the company tries to get into staple crops in the Midwest.

"Corn and soybeans are obviously huge acreage, but they don't get sprayed very often by and large, usually one aerial spray per season," Norcia says. "So, for us, the more attractive farms, especially as we're developing this, are crops that need sprayed more frequently. Long term, though, we'd love to be partnering with applicators in those regions, as well."

If development goes as planned, Pyka's planes could cost half as much per acre from an operating perspective as more traditional manned crop duster aircraft.

Volocopter, a German company, sees yet another answer to the future of aerial spraying. It also pushes back against the idea of an army of small multirotor drones, but with one giant multirotor drone, an 18-propeller beast capable of hauling 440 pounds up to 25 miles or spraying up to 15 acres an hour on a battery charge that will last 30 minutes.

"It's not like the small drones, which are basically consumer products," says Marketa Dvorakova, the company's business development manager. "It's an aircraft at the end of the day, and there are advantages."

Volocopter, with its VoloDrone, has a well-known partner in ag, too, announcing last fall it was working with John Deere to develop sprayer capabilities, attaching those parts to the bottom of the multirotor machine's frame.

"We worked together with John Deere, as they have great knowledge for the agricultural space, and we believe we can add great value for farmers by allowing them to go into the third dimension (vertical) without having to have a helicopter," Volocopter's Helena Treeck says.

Some of a larger vehicle's advantages over smaller drones are obvious in the amount of chemical that can be flown and how much ground can be covered in one flight. Other advantages are less obvious. The Volocopter team points to the downwash its machine produces as one perk. That force is much greater in driving the spray down into the crop canopy than is possible with a smaller multirotor aircraft.

It isn't headed straight for the American Midwest either. The first target, the team says, is steep-sloped vineyards, which can be dangerous for tractors.

Both Pyka and Volocopter come to the ag industry in a similar, unique way: from the technology world and as part of an effort first launched not to build a sprayer but an autonomous aerial taxi.

Volocopter is well down that path. It staged a public test of its autonomous taxi's (meant to haul people) capabilities in 2017 in Dubai, then last year in Helsinki, Singapore and Stuttgart, Germany. It branched to utility drones in 2018.

Pyka comes out of Silicon Valley and was the product of entrepreneurs searching for a use for technology they'd already been working on rather than some farmers looking for a way to spray their fields.

"We wanted to work on an aircraft you could put people on someday but wanted to find a use case that was really useful for society but low risk," Norcia explains. "We really fell in love with crop spraying."

One big difference between the potential reach of smaller multirotor spray drones and their larger cousins is already evident: Licensing issues have kept Pyka largely grounded from commercial spraying in the United States. A company like Rantizo, however, which takes modified DJI consumer drones and outfits them for spraying, is certified in many states and began spraying fields commercially last year. 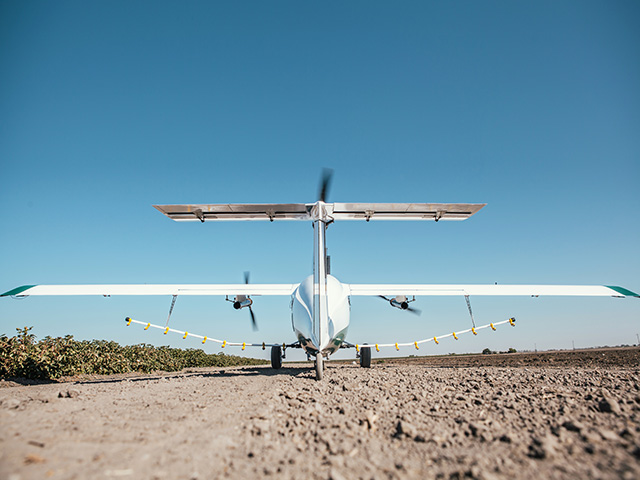