Purdue University's Agricultural Confined Spaces unit documented a nearly 10% increase in 2019 confined spaces incidents. Produced annually, this report is an accounting of tragedy on the American farm, especially those in the Midwest.

Confined spaces injuries and fatalities include grain entrapments, falls, entanglements and asphyxiations. Confined spaces incidents are often due to farmers, family or employees entering bins to clear voids over outlets or crusted grain from sidewalls.

One author of the report is Bill Field, arguably the preeminent expert on grain incidents. "I'm most surprised," he says, "of the incredible number of incidents from the last part of 2019 and into 2020." He thought when planting season arrived, entrapment incidents would largely fade away. But, he is still tracking cases. "The amount of immature corn is still causing problems throughout the Corn Belt," he says.

Field, professor of agricultural and biological engineering at Purdue, examined his first grain incident in 1977. In that, a man died (it is most often men who die) in an 8,000-bushel bin filled with out-of-condition corn. "I remember firefighters crying because they did not know what to do," Field says.

Minnesota is a particularly difficult spot this year. Field says the state is generally in the top five reporting confined spaces incidents. But, it has now topped the list.

One man died, Field retells, inside a grain bin when a column of corn fell onto him. Field says the roof leaked into the center of the bin forming a 17-foot, 4-inch-tall stalagmite of corn -- a column of corn rising from the floor. The man was chipping away at it before tons of corn toppled onto him.

Soybeans have been a particular problem this year, Field says. That's true even in the South.

He says reports reveal that some 2019 beans work like slush. The soybeans are soft, wet, spoiled and full of trash and plant material, which creates a mass that won't flow. In one incident, Field reports an 80-year-old man became trapped in material such as this. He climbed into the bin from a side door to knock down beans stuck to the wall. The mass came lose and nearly buried him in an avalanche. Rescuers were hampered in their efforts immediately by the slushy mass.

"Poor grain quality always increases the risk of entrapment," he says. "It puts fireman in danger."

"Most corn is of questionable quality this year," agrees Gary Woodruff, a grain-conditioning expert with GSI. Growers were urged to dry their corn down to 14% this year, but few actually accomplished that.

"Grain went into the bins at a lower quality, higher moisture and with more fines this fall, which makes this year much more dangerous," he says. Fines may congregate in the center of the bin where they obstruct airflow. The centers don't cool, and they can go bad, Woodruff explains.

From the 1970s forward, Purdue University's Agricultural and Biological Engineering department has been investigating incidents involving grain-storage and handling facilities at both commercial and on-farm locations. Beginning in 2013, the effort was expanded to include incidents involving grain transport vehicles (trucks, wagons, railcars); injuries occurring inside of confined spaces because of exposure to powered mechanical components, such as augers; falls from or into confined spaces; and other types of agricultural confined spaces, including forage storage silos, liquid storage tanks and manure-storage facilities.

As of the end of 2019, the Purdue Agricultural Confined Space Incident Database held information on 2,117 cases between 1962 and 2019. Of these, 60% were fatal. A large majority involve grain-storage and handling facilities. Field believes 30% of all cases go unreported or undocumented.

The 2019 report documented 67 cases of confined space incidents, a 9.8% increase over 2018. That includes 38 grain-entrapment cases (up 26.7% from 2018), eight falls into or from grain-storage structures, five asphyxiations from deficient oxygen levels or toxic environments, and 11 equipment entanglements, such as those involving in-floor and sweep augers. Fatalities numbered 39 in 2019, higher than nonfatal cases (28).

One in five of all agricultural confined spaces accidents, which includes grain accidents, involve young adults and children under 21.

While grain entrapments accounted for 56.7% of all documented cases during 2019, that percentage fell below the historical average.

OLDEST TO THE YOUNGEST

There were confined spaces incidents in 15 states last year. Those with the most included Minnesota (13), Iowa and Nebraska (eight each), and Wisconsin (seven). Four cases each were documented in Illinois, North Dakota and Ohio. The oldest victim was 82. The youngest, 11. All cases were males.

This is a year for altering grain-handling practices. If a farmer is handling his grain this year as he has done in past years, he's making a mistake, Woodruff says. "I have a hard time not getting upset," he says. "Farmers want to get into those bins and do something, and too many of them are going to die."

Purdue's 2019 entrapment report includes suggestions for managing grain that won't flow. They may not be the most profitable options, the report concludes, but they are intended to keep everyone safe.

> Never enter a bin where there is evidence of crusting on the surface or within the grain mass. Stay out if grain is removed from the structure and the surface has not flowed inward. This is a clear sign that crusting is present and a void has formed over the outlet.

> Immediately remove grain if there are any signs it has gone out of condition. Grain condition will not improve if left in storage. It will get worse.

> Perform all observations or unplugging efforts from outside the bin at the top access hatch. In some cases, long pipes, rebar or other probes can be inserted into the grain mass to break up crusted grain or trash that is plugging the outlet. Watch out for overhead power lines when handling these long probes.

> If the grain has become so crusted it cannot be removed according to the bin manufacturer's recommendations, contact a professional grain salvage service to remove out-of-condition grain.

> Do not cut the side walls of a bin without consulting the manufacturer. Cutting into a bin can damage the structural integrity of the bin or result in uneven unloading, which can cause the structure to fail and collapse. 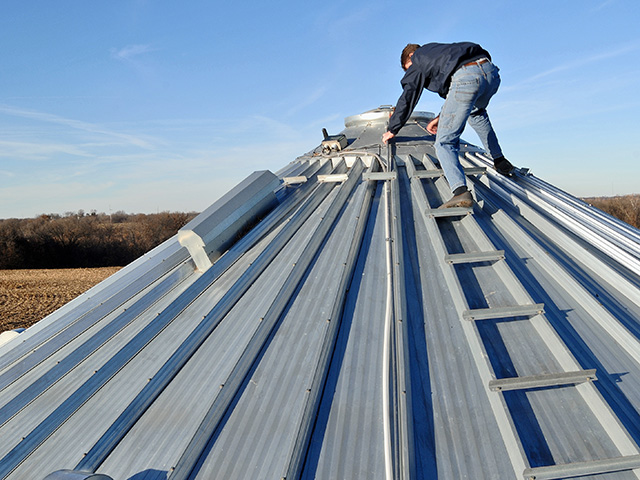