The early fog clings on a November morning in a valley below the Tuscan, Italy, town of Montalcino, soupy thick and draining what color remains from a landscape already deadened by autumn.

Montalcino, a small fortress village atop a hill about 70 miles south of Florence, is today built on two things: wine and the tourists who flock for that wine, coming up the twisting roads to the base of the 650-year-old castle fortress that still dominates the town.

The star of the show is Brunello di Montalcino, a red wine that’s a local specialty and the product of the Sangiovese grapevines that stretch out for miles in every direction. Shuttle buses with wine tours motor endlessly between vineyards during the warm summer months, and it all comes to a peak in September, when the grapes are harvested.

Two months later, all is quiet at the Croce di Mezzo vineyard, a couple of miles down the hill from Montalcino. Savvy tourists come for the grape harvest after the summer crowds have gone. No tourists come in November, and the only activity is a small crew of farmhands working beyond the vines in a thick grove of olive trees. Limb by limb, they pop fat green and black olives off the branches.

“The wine is very, very important,” says Cristian Angeli, leader of the day’s crew. “The olive is a more traditional product, traditionally more for the family, only a small part for the business.”

Each year, the Croce di Mezzo vineyard produces more than 500 gallons of olive oil. The process lacks the romantics of the grape harvest, but the crop is vital to the families that toil on the Italian farms, important to the Tuscan region and central to the whole of Italy. But, it’s becoming evermore endangered.

Olives have long been a staple crop of the Mediterranean region, so long that both the tree and the oil are referenced throughout the Bible. Still, Italian olive oil faces crises from multiple directions.

On one side is a wave of foreign oil passed off as Italian, a threat local farmers have taken very seriously. More than 10,000 rallied in Florence in 2016 to demand better labeling and legal crackdowns. A report from farmers’ union organization Coldiretti says nearly two-thirds of bottles billed as “made in Italy” were mixed with foreign product. The export of falsely labeled oil can be so lucrative even the Mafia plays a role.

The last harvest was another crippling blow. Not all olive-harvesting seasons are made equal. Crews don’t collect from every tree every year, and the rotations aren’t equal; so there are inherently big years and small years no matter what else happens. The 2018 harvest had a 60% drop in olives and hit a 25-year low. Cold weather ravaged the crop, particularly in the south of Italy, the richest region of olive production.

TURN BACK THE CLOCK

The troubles of other regions, even the concerns of inauthentic competitors, seem a long way from the foggy valley below Montalcino early in November. The problems of the day are much more local.

There are mechanized options for olive harvesting, machines that grab a tree by the trunk and shake the olives free. In Tuscany, however, much of the work is more hands-on. Harvesters use an olive pole, a long stick often 6 or 8 feet long, with a motorized head that twists and rattles a branch to free the olives. They fall onto burlap sheets laid around the trunks. The olives are dumped into baskets from there and, those at Croce di Mezzo at least, are stashed overnight in the vineyard’s cellar. They are placed beyond a dozen huge wooden vats with fermenting wine and a half-dozen large metal baskets loaded to the top with wine that’s ready, bottled and waiting for customers.

When enough olives are accumulated, they’re hauled to a nearby crushing facility. But, at the rate things are going at Croce di Mezzo, that task typically performed daily is considerably less frequent. The olive pole has broken several days into the 2018 harvest.

There are 750 olive trees on 5 hectares (12.3 acres) at Croce di Mezzo, about 20 percent of the property. With the damaged equipment, the harvest will have to be done the old-fashioned way, and the crew members run their gloved hands down branch after branch, popping free the season’s haul. A tree usually takes about 30 minutes. Without mechanization, each takes three hours.

“The production of olives here is small,” says Angeli, stepping back from his work to wipe sweat from his brow, “but the job is large.”

The true gem of the area is the Sangiovese grape and the Brunello di Montalcino wine it creates. It takes three years in those large oak casks to finish. It’s bottled in September then must wait six more months in the bottle before it’s finally ready to be sold at a spring fair. Even then, a few more years in a bottle only helps develop the variety’s robust flavors.

“When it stays in the bottle, all the components come together,” says Fiorella Vannoi, who helps run the Croce di Mezzo vineyard with her family. Their quest through nearly five decades at the helm has been to perfect the Brunello, but they’ve kept at other pursuits on the farm, as well, including maintaining a strong agrotourism business.

The family offers a handful of small cottages for rent, some near a swimming pool, and all just steps away from the vines. Wine tastings are available most days, providing a chance to try that Brunello but also the Rosso di Montalcino, a quickened version of the Brunello made from the same grapes. It spends about a year in oak casks instead of three. “Baby Brunello,” Vannoi says, “better with dinner.”

For most of the year, the olives are a bit of an afterthought at the vineyard and around the immediate area, though the family has ramped up efforts to bottle the extra-virgin olive oil and sell it alongside the wine, even shipping it with distributors they work with in the United States.

It’s not all for sale, however. Vannoi squirrels away about a third of each year’s oil to use in her own home for cooking and with salads.

The wine is for the business. The olives, they’re for the family. 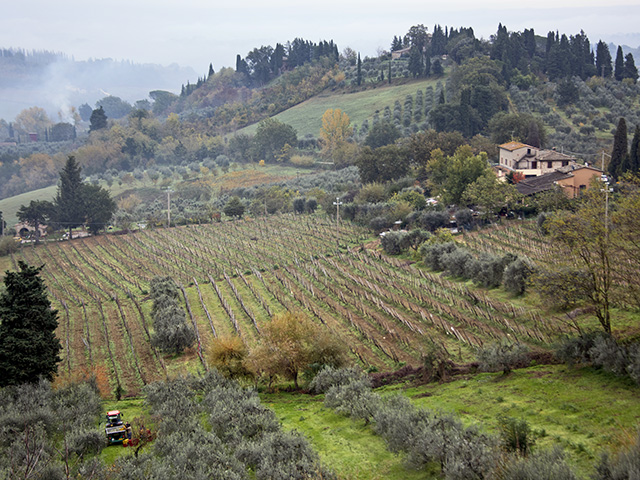