It could be a couple of weeks before anyone knows whether freight workers will accept a tentative agreement that's on the table now or go on strike. This is despite reassurances coming from the White House that a potentially major economic setback has been averted.

The National Cattlemen's Beef Association Executive Director of Government Affairs Allison Rivera called the potential strike "very much a fluid situation" as she reached out to update members on what is going on.

"There was the possibility of two major unions going on strike on Friday (Sept. 16) and causing major supply chain disruptions and major concerns for cattle producers across the country," she said in a recording released to members and the media. Currently, she said, the biggest issue would be around inputs that are shipped by rail within the beef industry.

Rivera noted that conversations between companies and unions have been going on for months. She said a Presidential Emergency Board was created, leading to a set of recommendations that NCBA hoped the unions would take under consideration and possibly accept.

"If Congress has to force them (the unions) to follow these recommendations, they are able to do that, and it might come down to that. But we are obviously in a place where we are trying to figure out what happens next," she said.

For cattle producers right now, Rivera said the two biggest concerns should a shutdown take place are feed and fuel, especially critical for parts of the country where drought has taken a toll on forages.

"We already have high input costs," she added. "The last thing we want to see are supply chain disruptions and further increases to those inputs."

Rivera noted that NCBA had signed multiple letters pushing Congress to stay in town and make sure they push forward with the Presidential Emergency Board's recommendations, implementing them if it becomes necessary to keep a strike from occurring. "We have continued to stay in the fight," she added.

Alex Tigue, a regional animal science and forages agent with the Alabama Extension office, agreed that feed would be the major issue for most of his area's producers should the strike take place. Tigue works with Alabama's popular Pasture to Rail program.

Pasture to Rail is a retained ownership program to help producers collect post-weaning performance and carcass data on cattle from their breeding programs. The consignment cattle are shipped to a feedlot in Kansas, where they are fed out and then sold on carcass grid to a plant in the area.

Asked if a strike could interrupt this program, or others like it, Tigue told DTN that these cattle are all shipped using tractor-trailers today. This has largely become the industry norm. Most of those drivers are small, independent operators, he added.

"I would worry about movement of grain around the country with feed costs already exorbitant," he said. "Corn is expensive, but then there is a significant basis on top of that market price to get it there. In a retained ownership situation, or really any feeding situation, outside of the value of the cattle, feed is your No. 1 cost, and it will be what determines whether you make a profit or not."

FINAL AGREEMENT COULD BE WEEKS OUT

While union negotiators are reported to have agreed to the Biden administration's recommendations and will take them before their members, this doesn't mean the deal is done. What is in place now is reported to have taken 20 hours of talks, with Labor Secretary Marty Walsh and others acting as facilitators.

President Joe Biden expressed that high level of confidence, calling the deal a "big win for our economy and the American people." He added that he was "optimistic that we can do this in other fields as well. Unions and management can work together for the benefit of everyone."

DTN's editors are following developments regarding the tentative agreement. Ag Policy Editor Chris Clayton reported that Mike Seyfert, president and CEO of the National Grain and Feed Association, said rails move about 25% of all grain in the U.S. He raised concerns about risks to harvest and grain movements if a deal is not finalized. That article, in its entirety, can be found here: https://www.dtnpf.com/….

DTN Basis Analyst Mary Kennedy outlines the history of these rail contract negotiations, which she reported had been going on for nearly three years. She said the tentative agreement includes wage increases, bonuses, and no increases to insurance copays and deductibles. There is an immediate wage increase of 14% as part of the deal. To read her detailed update, go here: https://www.dtnpf.com/…. 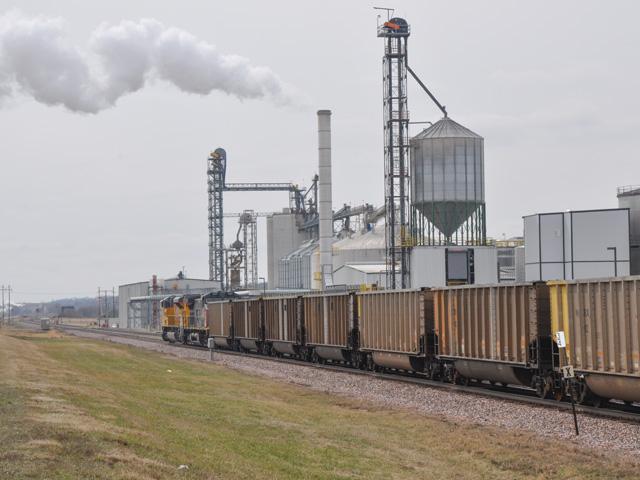