My father grew up feeding square hay bales and has never believed in using hay rings. We lose a lot of hay just putting out round bales. Do you have any information I could use to convince him we need to be using hay rings?

I am of that generation that transitioned from square bales to round bales. Over the years, I've become a huge advocate of feeding round bales in some structure. At one time or the other, I have probably owned most of the different types of hay feeders around, including the round metal and plastic rings, various cradle types and a hay wagon.

At Michigan State University, Dr. Daniel Buskirk and associates measured round bale waste using the four most common feeder types. They found the following: Waste with a cone feeder was the least, at 3.5%. This was following by the ring feeders, at 6.1% waste, trailer feeder at 11.4% waste and cradle feeders at 14.6% waste.

The researchers noted losses in their test were relatively low because of several factors, and real-world wastage would almost certainly be much higher. In their case, the waste was lower because the hay was very high-quality and stored in a barn, meaning cows didn't try to sort through it as they ate. In addition, slant bars encouraged cows to keep their heads in the feeders while eating, so they were less likely to pull hay from the feeders. In addition, a top rail forced cows to eat with their heads down in a natural grazing position, so they didn't throw their heads and toss hay out of the ring. The ring feeder used had metal skirting on the bottom two feet, without which, the researchers noted, hay loss would have been much greater.

I found this study interesting because I am a huge fan of my cone feeders. Yes, they were more expensive than the ring types, but they are constructed from heavier gauge metal. They should last longer, and the annual hay savings should more than pay for the additional cost in the first year or two.

Given that winter feeding is the biggest expense for a cow/calf producer, this study gives us something to think about. It clearly shows one area where we can all help reduce this cost. I encourage our readers to send in tips they use to reduce winter feeding costs. 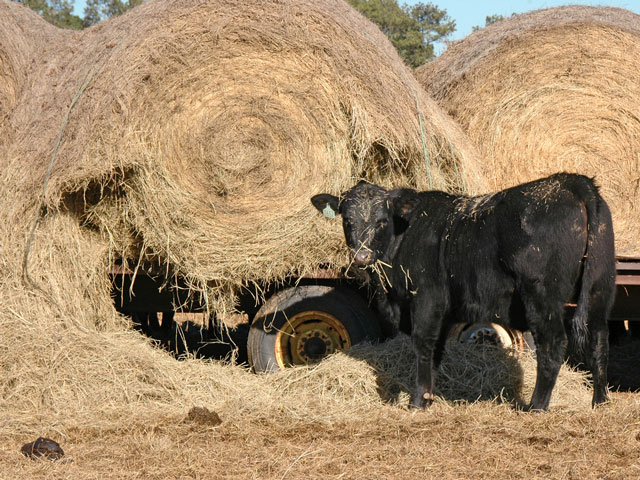