Everyone thinks they have the best dog, and none of them are wrong. It's a classic line from well-known canine author W.R. Purche.

But, in Joe Sheeran's case, he can back his opinion up with facts. His 8-year-old Australian shepherd, Woody, is the American Farm Bureau Federation's 2019 Farm Dog of the Year.

"He is a pretty special dog," Sheeran admits. When Woody was not quite 8 months old, the Flatonia, Texas, stockman spotted one of his heifers off by herself and figured she'd just had a calf. When he checked, he found the calf down in a ditch, struggling to get out. The heifer took exception to Sheeran's help, charged him, caught him under the chin with her head, flattened him and continued to grind him into the dirt.

Woody jumped in and got the heifer off Sheeran long enough for him to get back on his feet.

"I took myself to the ER, and luckily I didn't have any broken bones. But, I wouldn't be here today if it wasn't for Woody. He was one more tough little son of a gun."

No doubt that incident strengthened the bond between the 69-year-old Texan and Woody, as well as helped earn him the Farm Dog of the Year title. Not one to rest on his laurels, though, Woody continues to earn his keep on the ranch Sheeran shares with wife, Mary. Along with a Senepol herd, the couple run stockers and a flock of Dorper sheep.

"I use my dogs to gather my stock to doctor them," Sheeran says. "With sheep, you have to have a dog. I don't care how many people you have, you aren't going to get them in a pen or load a trailer without a dog."

Woody, along with his farm mates Mercy, Kate, Czech and Red, also help hold cattle off Sheeran when he feeds cubes, and they guard the gate while he goes in and out with rolls of hay.

Even during daily chores, Woody continues to impress Sheeran with his intuition and intelligence. Recently, a ewe prolapsed and needed to be taken to the vet. Since sheep, like cattle, move easier if they can go with their herd mates, Sheeran moved three more ewes up the lane with her and planned to sort them back off the trailer when he got them all loaded. Woody instinctively knew he wanted the prolapsed ewe, so he singled her out and loaded her on the trailer.

Without a command, the Aussie also knows when there are new lambs in the pasture and will go lie down next to one until Sheeran can find it. He also excels at herding trials put on by the Australian Shepherd Club of America. In 2011, at just 13 months old and the youngest dog at the national trial, Woody won third place in the Started Cattle division. In 2012, he won first place in the open division in the prenational trial. In 2013, he made it to the finals in the cattle and duck classes. In 2014, his best year, he ended up as the No. 2 duck dog, No. 3 cattle dog and No. 5 sheep dog.

|Sheeran has backed off trialing the talented dog more recently. "If you want to be competitive, you have to go to a lot of trials and be gone a lot. I get more enjoyment here. I help friends train their dogs. It is a lot of fun."

Whether they're hanging out while coaching friends or bringing the sheep in the barn for the night, the bond between Sheeran and Woody is obvious.

"It is hard to describe, really. They know you better than you know yourself," he says. Sheeran tries not to choke up when he says again, "Woody is a pretty special dog." 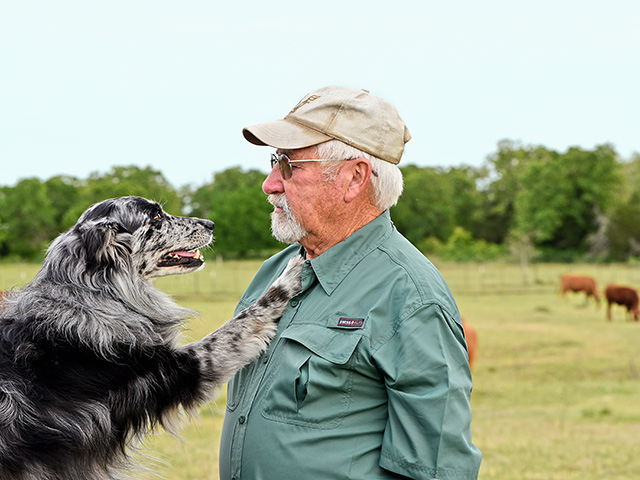