Antimicrobial-resistant bacteria are everywhere. The World Health Organization says we are in a global crisis because of this resistance. It's a message constantly making its way across the globe in tweets and clever headlines, influencing the way people live, what they buy and even where they shop. The narrative is also behind a premium market niche continuing to shape animal agriculture.

A pivotal point in the shift took place in 2014, when Chick-fil-A announced that by December 2019, all of the chicken it sells will carry a "No Antibiotics Ever" (NAE) promise. The popular fast-food chain has converted more than 80% of its chicken supply to NAE product and says it will meet its end-of-year goal. Other food companies following suit include Panera, Jason's Deli, Carl's Jr., Hardee's, Subway and Papa John's.

Chicken suppliers began to shift production to meet these markets and, in the process, took their own NAE promotions retail hoping to influence grocery shoppers to spend more for a package of chicken raised without antibiotics. The fact that antibiotic withdrawal times meant chickens already didn't have antibiotics in them when they left the farm was overlooked in the race to stand out at the meat counter.

Taking a position opposite these prevailing marketing winds, Mike Cockrell, chief financial officer at Sanderson Farms, notes: "We decided not to sacrifice our environmental goals, our animal-welfare goals or our food-safety goals for marketing purposes."

Rather, Sanderson Farms, the third-largest poultry producer in the U.S., pulled back its corporate curtain, telling consumers the truth about antibiotic use in chickens. They did it with Bob and Dale, a fictional blue-collar duo who first appeared in 2017, reassuring consumers there was no reason to pay more for labels that said "No Antibiotics" because chickens don't have antibiotics in them. They poked fun at a Madison Avenue marketing guru and farmer "Old MacGimmick."

The response to the campaign was overwhelmingly positive. Brand recognition reached nearly 80% for the Laurel, Mississippi, producer. Facebook followers more than doubled.

INFLUENCE OF THE VFD

At the same time Sanderson Farms' advertising campaign was educating consumers, the FDA was implementing new rules regarding antimicrobial use in animal agriculture. The Veterinary Feed Directive (VFD), launched in January 2017, moved antimicrobials from over-the-counter sales to prescription or VFD status. It was all in an effort to reduce unnecessary use, especially of products important for human health. That meant all production claims for antimicrobial uses as growth agents were removed from labels.

A recent summary from the FDA looked at the amount of antimicrobials sold or distributed for use in food-production animals before and after implementation of the VFD. It is the industry's first report card since the change, showing double-digit shifts between 2016 and 2017 in domestic sales and distribution of medically important antimicrobials approved for use in food-producing animals.

Overall, levels decreased 33%. Tetracycline, which represented the largest volume in the report, decreased 40%. The highest reductions were reported in antimicrobials in feed, followed by water. The chicken industry led with a 47% decrease. Cattle and swine were each 35% lower.

The VFD is only the first step in a changing pattern of antimicrobial use. Not content to maintain the status quo, Sanderson Farms has continued to evaluate its stance on antimicrobial use. It recently announced a shift largely in response to an eight-month study it commissioned, which was led by a research team made up of medical doctors, veterinarians and researchers who specialized in antimicrobial-resistant bacteria, members of academia and members of the Presidential Advisory Council on Combating Antibiotic-Resistant Bacteria.

"We made all of our data and feed formulas, and medications used available to this group of experts," Cockrell says. "The conclusion they came to was that everything we were doing was considered judicious use of antibiotics. They said … a reasonable compromise would be if we no longer used medically important antibiotics to prevent disease, even though these products are approved."

The antimicrobials impacted are gentamicin and virginiamycin, used to keep chicks healthy in hatcheries and in feed. Both are on the FDA's "Medically Important" list for use in human medical therapy. Cockrell stresses Sanderson Farms' decision to eliminate their use earlier this year had nothing to do with marketing.

"This was about science and about being deliberate," Cockrell says of the changes. "Animal welfare is top of mind. We will not take that next step, which is 'no antibiotics ever,' because it's inconsistent with our principles for animal welfare. We will continue to treat sick chickens. And, we will continue to use ionophores."

In the study Sanderson Farms commissioned, Cockrell notes that higher rates of chicken deaths are seen in NAE systems. In addition, chickens in those systems were found more likely to shed salmonella or campylobacter.

"Birds that aren't treated when they become ill die at a higher rate. That is particularly true in the first seven days of life. Those birds don't die a pretty death. Their lungs fill with fluid. It is a fact, also, that a sick flock not treated brings a higher bacteria load to the plant. Whether that impacts consumers depends on what they do at the plant."

VIEW FROM THE FEEDLOT

Tera Barnhardt is a Kansas feedyard veterinarian and a strong proponent of a team approach to animal health care. She believes the VFD underscores the importance of those relationships.

"I'm all for the idea that any medication that will be used in production agriculture goes through a veterinarian to be sure it's an appropriate use," she says. "I honestly do not think the VFD had the negative impact producers expected. The benefits have yet to be measured accurately in my opinion."

Barnhardt is on the front lines of the segment of the cattle industry many criticize for a lack of antimicrobial stewardship. She works with Cattle Empire, a family-owned and operated feedyard with a one-time capacity of just more than 50,000 head. Her views on antimicrobial resistance are bold, and she doesn't hold back opinions on ways she believes the industry could improve.

"In the feeder sector, there is a lot of pressure to be good stewards of antimicrobials," she says. "But, there is a disconnect when it comes to what happens before animals get to the feeder. We don't always get a good history. We don't know if they've been managed well. Sometimes, there are transportation issues or weather problems. It can be hard to know when it's appropriate to use an antimicrobial, or which ones will be most effective if they've been treated before they arrive. Based on what I've seen, there is often a management issue prior to the feeder receiving a group of cattle that will show up in a disease outbreak."

Noting a reluctance in the beef industry for mandatory traceability, Barnhardt says implementation of such a system would definitely help the industry improve antimicrobial use.

"We'd know what kind of management an animal was under prior to their arrival at the feeder, and that would help us," she says. "When the industry figures out traceability, we will be able to figure out how to be the best stewards possible."

Joan Ruskamp is part of a family beef operation and feedlot in Nebraska. She says they've relied on three main antibiotics for years and have not seen a loss of effectiveness unless an animal has a chronic history they don't know about. "That's where we will see an issue, and it's not very common," she notes.

Primarily, she says, they use Excede, Nuflor and Draxxin. The health issues they most often deal with are hoof rot and bovine respiratory disease. Their health protocols were developed with their veterinarians, where they discuss things like where they buy cattle from, weights on those cattle and time of the year they buy.

"Every feedyard is not the same. There are similarities but no exact replicas. How you use bedding, how your pens lay … there are a lot of factors that go into developing the right health program for the cattle you raise," she explains.

"At the end of the day, I think the industry needs to work as one. It's ethically right to work together as a team in what we produce. Send us a healthy calf; we'll keep him healthy all the way through. Then, as an industry, we can have a product we're all proud of."

Ruskamp adds she has a lot of empathy for consumers who receive information that's often hard to decipher. A common statistic she is faced with is that a majority of antimicrobials sold go to the beef industry. If a person just looks at kilograms of antimicrobials sold, it's easy to get the wrong message.

"You have to consider what is being used, how it's used and the size of the animal. There's a big difference in the amount of antimicrobial you'd use to treat a 150-pound person versus a 1,200-pound steer. When we look at something on social media, it can be so sensationalized. Sadly, the average consumer doesn't get the real story.

"People in this industry, in all of animal ag, work so hard, and they really do care," she adds. "We are out there on holidays, Sundays, in blizzards, hurricanes and fires. People have lost their lives trying to save and care for their livestock. The dedication is out there. We just need to find a way to communicate that to those outside of agriculture. We need them to know they can count on us to do the right thing." 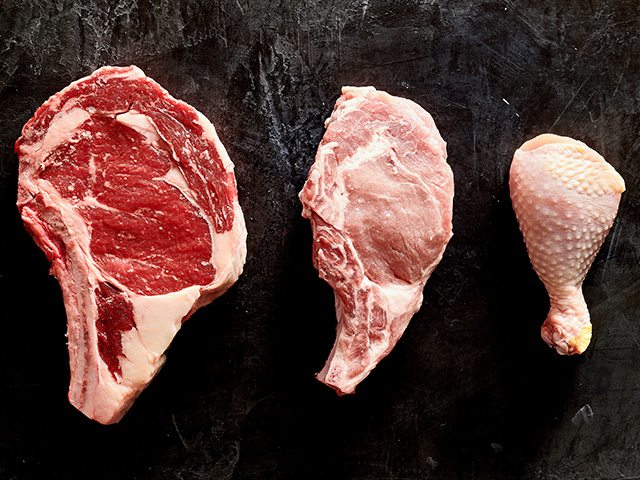