Once a beef calf hits the ground, the clock is ticking. What happens, or doesn't happen, as each hour passes will determine, to a large extent, whether that calf thrives. It all starts with colostrum.

Sometimes called "first milk," colostrum is more similar to nutrient-rich cream than milk. It is high in immunoglobulins (Ig) to help prevent infection, fat, energy, vitamins A and D, and white blood cells.

Especially concerning are situations where a calf had a difficult birth, it is a first calf for a heifer, the cow has a bad temperament and won't allow its calf to nurse or the cow has mastitis. Healthy cows with adequate body condition (5.5 to 6) precalving should have no trouble providing enough colostrum to their newborns. Heifers should be in a higher body condition (6.5 to 7) to avoid potential problems.

The first sign of a problem comes early. Calves should be up and nursing within one hour. If there's any reason to doubt that this has taken place, consider tube-feeding the calf at least 2 quarts of colostrum or colostrum replacer before the six-hour mark. Another 2 quarts by the 12-hour mark is often recommended.

W. Mark Hilton, a veterinarian with Elanco Animal Health, and recently retired from Purdue University College of Veterinary Medicine, says producers have to be ready to respond when they believe a calf is not getting colostrum. He recommends always having a bag or two of colostrum replacer on hand.

"It doesn't go bad if stored properly. So at 2 in the morning when you see there is a problem, you don't have to go to the clinic. I look at it as cheap insurance," Hilton says, adding that it's key to buy a well-researched, good product.

Some producers go to dairies in their area to buy colostrum, which they then freeze for future use. While it is fine to save colostrum this way for up to a year, Hilton emphasizes the source should be your own herd. Going to someone else for colostrum is risky.

"Never do that. Never go buy colostrum from some other herd owner. You may be buying a new disease. It's not worth the risk. Only use colostrum you've collected from your own herd or colostrum replacer," he cautions.

Hilton explains a colostrum replacer is exactly that, a replacement. He specifies that producers should use a replacer, not a supplement, and that it should be made specifically for cattle.

He recommends asking your veterinarian for specific product recommendations and stresses this is not a place to save money. The higher-quality products on the market have a minimum of 60 grams of IgG (immunoglobulins, antibody type G) per liter.

Tom Earleywine, director of nutritional services with Land O'Lakes, says the use of colostrum replacers among beef producers is widespread today. He recommends products made from real cow colostrum that are USDA approved.

"We quarantine the colostrum we buy for our replacer. Our product goes to the USDA facility at Ames, Iowa, where they test it to see if there is a good passive transfer in one dose. If there is, we release it," he says of the company's Bovine IgG Land O'Lakes Colostrum Replacement.

Earleywine says the company's colostrum comes from dairy herds across Canada. It is dried and then selected, based on quality, for use as a replacer, a supplement or an additive. Only replacers made from real colostrum can have USDA approval.

For the best absorption, Earleywine says it's a good idea to administer a colostrum replacer in a one-time oral dose. If it is given in two doses, hours apart, the absorption of the second dose is lower and doesn't do the calf as much good. The first six hours of life are when the best colostrum absorption takes place; after that, it drops substantially. Research shows the amount of antibodies in the calf going from about 66% at six hours after birth to less than 10% at 24 hours.

Once past the crucial time for colostrum, the next hurdle calves may face generally hits before they are a month old. Calf diarrhea, often called scours, is a common problem, treatment for which will most often include the use of oral electrolytes.

Geof Smith, DVM and North Carolina State University ruminant health and production medicine professor, says there is a wide range of quality for these products.

"An oral electrolyte should have three things," he explains. "First, there should be sufficient sodium. The reason you're giving the electrolyte is to rehydrate the calf, and the key is to replace the sodium.

"Next, you need to have an alkalinizing agent, either bicarbonate or acetate. This helps correct acidosis, which is a low pH and is common when calves Suffer from diarrhea."

Smith stresses there is a tremendous variation in quality of electrolytes and strongly recommends producers talk to their veterinarian or nutritionist to be sure they choose a good product. He says it's difficult to read some of the labels and determine how much sodium they contain or other key indicators.

A common question Smith gets is whether producers can feed electrolytes at the same time a calf is drinking milk.

"There is a school of thought that a bicarbonate alkalinizing agent interferes with milk digestion, and so you should separate consumption of the two by a couple of hours. The label will even say not to feed with milk.

"We know, though, that an acetate alkalinizing agent does not interfere with milk digestion. So we can feed those products with milk."

He adds this can be a critical consideration in beef-calf care because these calves don't need to be held off their dams for any prolonged period of time.

Along with scours, there are other times an electrolyte may be of benefit to the herd, according to Land O'Lakes' Earleywine. Any time there is concern that cattle may be dehydrated, during shipping or heat stress, for example, offering an electrolyte can be a boost for the health of calves as well as older animals.

Earleywine stresses, however, that an animal receiving electrolytes must stay hydrated. The sodium in an electrolyte solution can make an animal more dehydrated not less, if the animal is otherwise healthy and not scouring.

"Taking an electrolyte without enough water creates a situation where the gut recognizes there is an imbalance, so it tries to flush that out," he says. "This removes more moisture from the animal, making him scour and become more dehydrated."

To avoid this, mix electrolytes with water, and make sure there is plenty of free-choice, high-quality water available all the time. In addition, Earleywine cautions, it's important to avoid the use of soft water when mixing electrolyte solutions because soft water has a higher sodium content.

Severely dehydrated calves are often easy to spot. They will typically have no suckle response, eyes will be sunken and pinched skin will not go back immediately. Along with water, calves with scours lose electrolytes, essential to bodily functions. This can lead to metabolic acidosis, which can kill a calf quickly.

Once a decision has been made to give electrolytes, improvement should be fairly fast. Continue to feed the calves until there is a strong recovery, and they are thriving. This means no more sunken eyes or signs of malaise. This typically takes one to three days, depending on the quality of the electrolyte and how dehydrated the calf was when electrolytes were first offered.

Earleywine says in cases of severe dehydration, it can take four to five days to see improvement. If calves are to this point, giving injectable electrolytes with veterinarian supervision via intravenous (IV) or subcutaneous (SQ) injections can revive the animal. Oral electrolytes are not the same as those made to be given using IV or SQ methods. These products are sterile, premixed and electrolyte-balanced.

While it's important to be prepared for any scenario come calving season, Hilton believes that for most well-managed beef operations, problems are more the exception than the rule.

"I constantly preach that beef cattle should be low maintenance," he says, adding that heterosis in a herd can go a long way toward minimizing problems and increasing productivity.

"Cows should calve unassisted. Calves should jump up and nurse aggressively. All the owner should have to do is tag the calves and cut the bulls. Calving season should really be a joy."

Collecting colostrum from dams in your own herd is the cheapest, and, many agree, best, way to nourish newborn calves that don't get what they need from mom.

The collection of colostrum each year is a good habit to get into. Choose cows you know to be tame and have a history of producing plentiful, high-quality colostrum. It should be more of a golden color than milk with no blood. Consistency should be thick and smooth.

After the newborn calf has nursed well, veterinarian Mark Hilton says 1 milliliter of oxytocin will enhance letdown of additional colostrum. Milk this out and freeze it. Frozen colostrum lasts about a year and needs to be thawed carefully, using warm water or a microwave on low power.

"In most well-managed herds, the heifers will calve first, and the chances that a heifer will have excess colostrum are not very high. So plan ahead," Hilton says. "When your cows calve, collect some colostrum and keep that in the freezer. Then next year when the heifers calve, you'll be prepared for any problems."

He adds: "It's important to know that colostrum quality can change with every pregnancy. So do some visual checks as to whether the udder looks full, and try to know the history of the cow. Older cows typically produce more and better colostrum than heifers, but it's all quite variable." 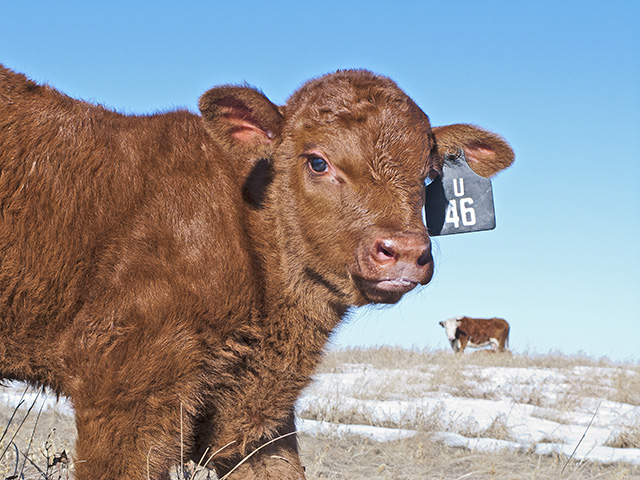