Jason and Misty Edmondson were sitting in their Suburban getting ready to take a quick ride through a herd of fall-calving cows when Misty's phone buzzed. "Yes sir. Yes sir. No problem. Can you have him there by 9 o'clock?" She shook her head. "Another producer with a lame bull," she said to Jason.

That type of call has become too common for the husband and wife team. Misty, a beef cattle veterinarian at Auburn University's (AU) College of Veterinary Medicine, and Jason, a technician at the vet school, are more than happy to help producers. But the two have become concerned with the number of hoof and leg problems they are seeing in herds today.

"That is our No. 1 problem," Jason said. "Last year, we had the largest in-house caseload of all the veterinary colleges in the nation, and lameness is a large part of what we do."

LAMENESS IN A THIRD

The Edmondsons see around 2,000 head of cattle a year at the veterinary clinic. That doesn't count the ones they treat on farm calls. Misty said 30% of the bulls they treat and 15% of the cows are there because of lameness. Between 70% and 80% of that lameness is in the foot.

Sarel Van Amstel, University of Tennessee (UT) veterinarian, has also seen a growing number of these types of cases in his state.

"We've seen a steep increase in lameness at UT," he said. And the treatment costs are just part of the expense of dealing with the issue.

"Any animal in pain goes through a negative metabolic state and doesn't gain weight," he explained. "Also, lame cattle don't breed." He added it takes a bull up to two months to regain fertility after he's been lame.

Van Amstel said subclinical and chronic laminitis is one of the most common problems he sees. This leads to lameness-causing lesions, such as sole ulcers and white line disease. Screw claw is also often the result of laminitis. The Edmondsons added they also have major issues with toe abscesses, foot rot and heel erosions.

The reason is often all about growth, Misty said. "We're pushing bulls too hard too fast," she said. "It is a disaster waiting to happen for their musculoskeletal system and their rumen."

She explained OCD (osteochondritis dissecans) lesions, abnormal hoof growth and chronic laminitis can all be the result of overfeeding.

"Body weight plays a big role," Van Amstel agreed. "Bulls are pushed very hard when they are young. A lot of them are overconditioned [too fat], and they don't get to do enough walking."

The Edmondsons, who have their own Angus herd, try to prevent hoof problems in their bull-development program through the use of moderation and timing of supplement.

"I'm not going to short their nutritional needs, but I try to target those needs without pushing them too hard," Jason said.

They start by creep-feeding bull calves from 3 to 7 months of age with a 15% protein, 70% TDN (total digestible nutrients) commercial pellet. The calves eat approximately .05 to 1% of their body weight per day. This results in an average weaning weight of around 680 pounds.

After they take yearling weights, the Auburn couple put the brakes on feed and weight gain. The bulls continue to get pellets at the rate of 9.5 to 10 pounds per head per day; however, that averages out to less than 1% of their body weight as the bulls grow. The young bulls are also on bahia- or bermudagrass pastures, where they have to walk to get feed and water.

While the couple believes overfeeding young bulls is the cause of much of the lameness they are seeing, Misty also said they are convinced there is a genetic component to the issue. Both the Edmondsons and Van Amstel treat cattle of other breeds, but by far the majority of the hoof and leg problems show up in Angus bulls.

Do Angus have more foot and leg problems than other breeds, or is it more noticeable because there are so many more Angus? At last count, there are more registered Angus, over 320,000 head, than all the other breeds combined.

To address this, the American Angus Association has adopted a foot-scoring system. Launched in November 2014, it's based on a system from the Angus Society of Australia that allows breeders to score hooves and hoof set on their cattle and send that information to the Angus headquarters. As of the end of June 2016, more than 6,600 scores had been collected in the American system.

Dan Moser, president of Angus Genetics Inc., said generating this data will ultimately allow the use of EPD (expected progeny difference) tools by breeders to put selection pressure on the most desirable traits. He added they already have enough data for a test run and are working to establish a heritability estimate. He doesn't know when EPDs will be available, explaining the timing will depend on how much data producers submit in the next year. Based on the Australian data, however, Moser said the heritability of hoof structure appears to be around 10% to 15%.

"That is fairly low, but it is significant enough we can make changes. It is similar to the heritability of heifer pregnancy," he explained.

"Hoof shape is partially a function of other conformation characteristics like hock set and shoulder angle," he said. "We're looking at joint angulation on the front and rear legs, whether they toe in or out, or are sickle-hocked. Then we're looking at the genetic relationship between those and hoof shape." Next, Weaber said they'll examine the relationship between those traits and longevity and stayability.

Even though EPDs for hoof and leg structure aren't available yet, the Edmondsons use a take-no-prisoners approach when selecting young bulls. "We'll look at their overall phenotype, their structure and muscling," Misty said. "We look for a lot of bone. We'll look at their genetics, but we're not going to keep a bull just because of his pedigree."

This is one of those times Jason uses one of his three copies of the American Angus Association's foot-scoring chart. "I keep one in my truck to use on our cattle, one on the chute at work to show producers and one in the classroom," he said. They pay particular attention to the angle of the hoof as it attaches to the pastern, as well as a straight hoof wall and even toes.

Before they sell their bulls (at 18 to 24 months) all have passed Breeding Soundness Exams. This doesn't just include a semen check and inspection of reproductive organs, but also includes an evaluation of hooves, legs and eyes.

"He can have the best semen in the world but if he doesn't have the feet and legs he won't pass. Bulls have to travel," said Misty.

Misty and Jason both believe soundness problems are fixable, but add the fix is a long-term one. Jason said, "In the Angus breed, we did a good job of breeding a high-producing calf with high growth. We just forgot to bring the framework."

KSU's Weaber agreed and added it isn't just a bull problem. "Since the '80s, the average mature cow size has gone up 350 pounds. The pounds of pressure per square inch on the sole area has gone up dramatically."

Jason said through artificial insemination and critical selection, the industry can have both growth and sound feet and legs.

"At one time, it was said we couldn't have carcass and growth. We did that. But it will take time and money. The biggest problem is the cost of culling bulls," he said. 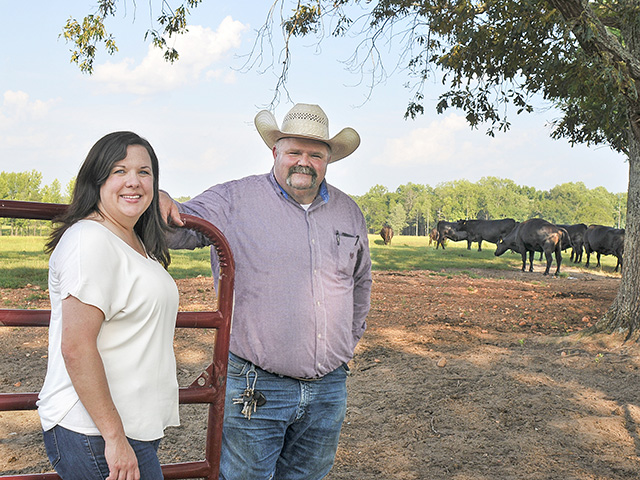