ST. LOUIS (DTN) -- The idea of a "tipping point" doesn't exactly sit well with Arthur Erickson. The CEO of Hylio, a leading producer of agriculture aerial sprayer drones, has long been a believer in the market. It hasn't taken increases in battery life or payload capacity, new benchmarks in acres sprayed per day or autonomous functionality to convince him autonomous aerial sprayers are the future.

"I've been at it six or seven years now, and I've seen sprayers prove highly effective for a lot of people," Erickson said.

He's a true believer and has been for a long time. Still, he's not blind to the fact that the greater agriculture industry in the United States has been slower to buy in, and that now, the industry seems poised for a big leap forward. It could be a tipping point in the consciousness of many farmers when the aerial sprayer drones become less something interesting that the neighbor's playing with and more a critical piece of the modern farmer's equipment.

"The sizes of drones we're now looking at and the reliability, the hardware and the accessibility, it's going to hit a broader and more generalized audience," Erickson said. "We're getting to that point where this is a wide-market product."

Industry experts point to leaps in terms of battery power and drone size, coupled with ever-evolving software, and they said the next wave of aerial agriculture sprayer drones could change the world sprays.

Rantizo has been at the forefront of aerial drone spraying, offering retrofitted drones to spraying contractors around the country. The company's base model is currently the DJI Argas T30, capable of a takeoff weight of 170 pounds. The company was a leader in securing licensing for aerial autonomous spraying in many states and was also at the front of the effort to operate not with one machine, but a swarm -- three drones swooping over a field -- to greatly increase the acres sprayed.

Still, currently available equipment is only so capable.

"Right now, drones are complementary," said Rantizo co-founder and CEO Matt Beckwith this summer at the InfoAg conference in Saint Louis, Missouri. "Drones are the side dish. They're not the steak."

That's changing, however, and perhaps soon. The company was the first to get FAA clearance to operate that DJI drone, securing last November the exemptions it needed to be able to fly a 170-pound machine instead of the 55-pound drones that fit within the FAA standards.

Now, the company is pressing for bigger changes.

"We'll start to see the first approvals in the next year," Beckwith said. "They're going to have bigger booms, higher capacity and larger batteries."

He continued, looking ahead to an aerial future.

"Right now, it's the side dish, but this all starts to make it more of the main course," he said. "This really unlocks the value of drone spraying. There are something like a billion acres sprayed every year in the United States, from planting through harvest and cover crops. A third of those should be handled by drone. Five years from now, we're talking about 10s of 1,000s of drones, and they will be doing substantial work, replacing the RoGators and the Patriots and the other major big sprayers."

Hylio is coming off the best summer of its existence, one in which Erickson said the company's newest offering, the AG-130, was effectively employed as a ground-spraying substitute by some users.

"We're talking 3,000 to 5,000 acres done with their AG-130s, either one or two of them or however many they have," he said. "That's work they would have otherwise been doing with a ground rig or a helicopter or a plane, so we're talking full replacement. It could be done faster with bigger drones, but it's already there."

The AG-130 is currently the largest of the four drones Hylio offers for sale to the public. It began being phased in last spring and brought a 42% increase in tank size, up to 8 gallons of spray, and a 35-foot swath, good for as much as 50 acres an hour. The prices start at $31,080.

That's but a step in what Hylio hopes to introduce next year, however. It's working on a machine that offers twice the capability of the AG-130, so 16 gallons.

"This thing is a behemoth," Erickson said. "It's competing directly with what you do with the ground rig. A full day with that drone, you could get 800 or 900 acres. That's definitely going to convince a lot of the naysayers. I think for sure that will be a turning point."

Guardian Agriculture is still one more American company intent on seeing major change in the aerial drone industry in the very near future. The Massachusetts-based startup is now taking reservations for its first machine, the SC1. It's a beast, with a 20-gallon tank and a 40-acre-per-hour target. With a price tag of $119,000, it's anything but a toy for a hobby.

"We think 20 gallons is the minimum size you need to make it more effective on the farm," co-founder and CEO Adam Bercu said.

The "SC" in SC1 stands for specialty crops, where Guardian envisions its first machine to be of the most use. There have been about 500 preorders so far with the goal of mid-2024 deliveries.

The next machine on the production line could be the BA1, for broad acre spraying, a drone that would more than double the capacity and, in turn, acre-per-hour promises of the SC1. Not yet officially announced, Guardian is hoping to release details and open preorders late in 2023.

"WE'RE TAKING THEM ON"

The main innovation in the looming giant leap of aerial spraying drone technology is largely in the batteries.

The batteries may be capable of longer sorties, but the company's strategy is aimed at shorter hops with frequent opportunities to supercharge the batteries back to 100%. It envisions five-minute flights for the SC1, just enough time to unload its 20-gallon tank. Between each flight, the machine will land and require one minute to refill the tank and two minutes and 30 seconds to return the battery to a full charge.

"That's what took us five years of R and D to perfect," Bercu said.

Their next iteration, the BC1, would follow the same format. 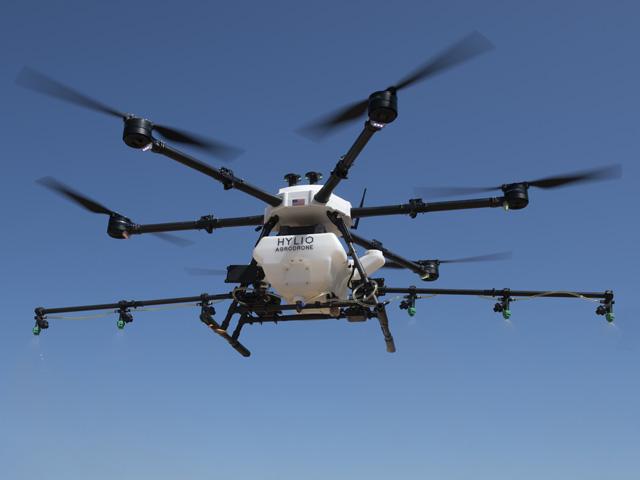