Both are lower than USDA's November estimates of 172.3 bpa on corn and 50.2 bpa on soybeans.

Haines said the Gro yield models didn't change too much throughout the season. Each spring, the models start with a trendline yield estimate, but based on weather models and early season data, Gro's corn yield model dropped to around 170 bpa pretty quickly. "Then the crop never was really able to recover from the drag of that late planting and early difficulty."

In late July and early August, one of the larger input components of Gro's yield models -- the American weather model, which is also called the Global Forecast System (GFS weather model) -- predicted some very hot temperatures at critical pollination periods. That caused some volatility in the corn yield model, but when the weather didn't materialize as forecast, the model corrected.

"So, we ended up just below 170 bpa by the end of the season, but we were really there the whole time, and much, much earlier than USDA's methodology would allow them to go," Haines said.

One of the biggest differences between USDA and Gro's yield estimates is the Illinois corn crop. USDA is forecasting a 215-bpa-statewide average, while Gro is at 205.

"At no point was it higher than previous peaks," Osnato said. Gro's yield estimate for Illinois is still the highest of the 10 states covered in the DTN Digital Yield Tour, "But it's not five bushels better than the previous record. Given how big of a state it is, if you take USDA's estimate down a little bit, then the national USDA number comes a little bit closer to us."

USDA will release its Crop Production Annual Summary on Jan. 12, 2023. It will contain the agency's final estimates, although the agency sometimes makes another revision after the September Grain Stocks report reveals more details about actual consumption levels.

Or you can find her on Twitter at @KatieD_DTN 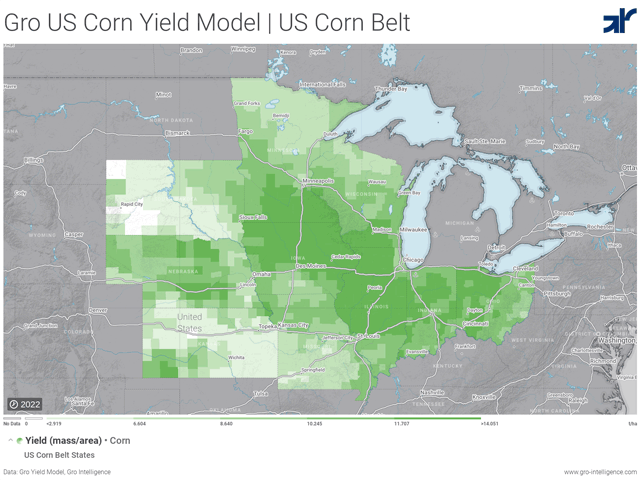