The complaint, filed in the U.S. District Court for the District of Middle North Carolina, alleges the two companies run so-called "loyalty programs" in which distributors only get paid if they limit business with competing manufacturers.

"Cutting off competition has allowed the defendants to inflate their prices and force American farmers to spend millions of dollars more for their products," the FTC said in a news release.

Syngenta and Corteva are two of the largest pesticide manufacturers operating in the United States. Syngenta, based in Switzerland, is a subsidiary of a Chinese state-owned company. Corteva, headquartered in Indianapolis, is the company formed as part of a merger between DuPont and Dow Chemical Company.

The FTC was joined in the complaint by attorneys general in California, Colorado, Illinois, Iowa, Indiana, Minnesota, Nebraska, Oregon, Texas and Wisconsin.

"Under this scheme, Syngenta and Corteva make more money than they would if they had to compete fairly with generics," the FTC said in a news release.

"Boxing out the competition allows them to keep charging such high prices that, even after compensating the distributors, they can maintain a large profit margin," the FTC said. "Distributors pass those high prices along to farmers. And those prices are ultimately passed on to consumers."

The FTC said in the news release that when a company creates a new pesticide, it can patent the invention and prevent others from selling the pesticide for 20 years.

"Ordinarily, when the patent expires, generic versions of the product enter the market to compete with the original brand-name version," FTC said. "The arrival of generics pushes prices down. Instead of one company wielding a monopoly over a new product, many manufacturers can compete for farmers' business."

When contacted by DTN for comment, Syngenta offered the following statement: "Today the Federal Trade Commission announced that it is initiating litigation against Syngenta and separately against another crop protection company, challenging certain U.S.-based discount programs extended to their respective customers. These discounts are part of a voluntary and industry-standard program that has been in place for decades at Syngenta and other crop protection companies.

"Syngenta strongly disagrees with the FTC's complaint, which it believes is contrary to the facts and the law and is without merit. This program is only one of several incentive programs offered by Syngenta in the U.S., and we are disappointed that the FTC has failed to appreciate the beneficial effects that these rebate programs provide to our channel partners and to growers."

When contacted by DTN for comment, Corteva offered the following statement: "Corteva Agriscience believes there is no basis for the complaint filed by the Federal Trade Commission on Sept. 29, 2022, and that the FTC's case faces significant hurdles on both the facts and the law. We will vigorously defend our position that Corteva's customer marketing programs are fully compliant with the antitrust laws and are, in fact, pro-competitive programs that benefit both channel partners and farmers.

"Corteva's marketing programs, contrary to the FTC's assertion that they block generics from entering the market, facilitate the company's pro-competitive mission of providing innovative products, services, support and stewardship to customers through Corteva's network of distributors and retailers. As always, our aim is to provide significant value and choices to customers, allowing them to be more sustainable, productive and profitable in their operations. Corteva also equips them to provide consumers with a wider range of healthy and nutritious food options, as well as to produce fuel, feed and fiber to support the needs of society.

"As a U.S.-based innovator of crop protection products, this case threatens the pro-competitive investments that Corteva makes and that growers rely on to protect America's crops. We are confident that we will prevail in this litigation and that there is no basis for the FTC's complaint."

The FTC said the complaint is part of a "broader push to unlock competition and innovation in the American economy" as well as to "protect consumers and small businesses and crack down on unfair tactics by dominant companies."

"Syngenta has monopoly and market power in the United States with respect to azoxystrobin, a fungicide; and mesotrione and metolachlor, both herbicides," the FTC said in a news release. 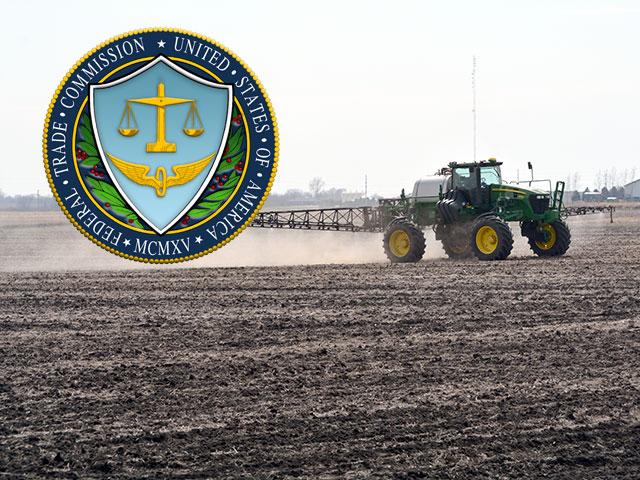