ANKENY, Iowa (DTN) -- Poor soybean seed quality in some varieties and lots may cause lower-than-normal germination rates, which could lead to poor emergence and thin stands. There are several steps farmers can take, though, to mitigate potential issues.

Shawn Conley, University of Wisconsin Extension soybean specialist, said he's warned farmers for the past several months to pay close attention this spring to the minimum germination rate printed on soybean seed bag and bulk container tags. It might surprise them.

As a result, Conley reminds farmers to make planting adjustments to compensate for lower germ seed. This could include seeding rates and planting depth.

"I don't know if anyone listened, but we will know very soon," Conley said. "With planting behind schedule and warm soils now, soybeans are going to pop out of the ground fast. Farmers will learn pretty quick if stand counts are down."

Thin and fragile seed coats are the primary culprit for lower germination rates, according to Conley. Late last summer and fall, the weather yo-yoed between hot and dry and wet in many seed growing areas. That caused seeds to expand and contract, which is hard on seed coats.

Rob Thomas, of Champion Seed, said lower soybean germination ratings for some seed is common this year. Champion Seed agronomists are making sure customers are aware of this and working with them to maximize yields.

"Seed coats are a little more brittle this year," he said. "If it comes off and the seed splits, it has less vigor to get up out of the ground and get going. You could have emergence issues."

Thomas continued that Champion, like most seed companies, tag seed lots at 90% germination as long as tests come back at that level or higher, even if it's 96%. "That's the industry standard," he said. Seed with germination test results lower than 90% will be tagged with the exact number.

"In past years, it wasn't uncommon for us to average 95% to 96% germination, but we put 90% on the bag," Thomas said. "This year, we're seeing 92% to 91% germination rate average, sometimes less, due to weather last year. One Champion seed lot is rated at 85% germination this year."

"The seed embryo is really close to the seed surface and easily bruised, which can cause a shortened hypocotyl and poor emergence," Thomas said.

-- Consider higher planting populations. For farmers who plant 120,000 seeds per acre or less, soy specialists recommend farmers bump up seeding rates by several percent to compensate for lower germination rates. Unless the germination rate is really low, such as 80%, Conley and Thomas said farmers who plant 140,000 seeds per acre can keep the same rate.

"Many farmers are cutting back on seeding rates since inputs costs are so high. They may want to bump it up a bit to have the same stand counts," Conley said.

"I wouldn't plant super deep this year," Thomas said. "If you have shortened and damaged hypocotyls and you're planting really deep, I think that's going to be a struggle for them to get out. I wouldn't go deeper than 1 inch."

-- Plant into ideal soil conditions. Planting in wet conditions that can cause soil compaction or planting in compacted soil is discouraged. "You don't want to make it harder for plants to push through soil and emerge." Thomas said.

-- Contemplate slowing planting speed. "The faster you go across the field, the more uneven the planting dept can be. Planting is late and I know farmers aren't going to want to hear it, but I wouldn't plant too fast," Thomas said.

-- Run augers slow. Many farmers use seed tenders to fill planters and treat their own seed. Augers are often used to move seed, but can be tough on it.

"In a year like this, the seed is more susceptible to damage," Conley said. "You don't want auger speeds too fast or aggressive. Treat seed with kid gloves this year." 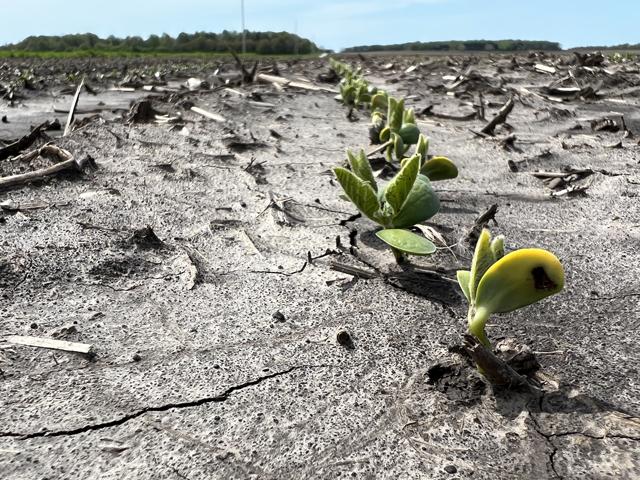