Aaron Harries, vice president of research and operations with Kansas Wheat, said the Day 1 total is the highest since 2011 and perhaps since the tour began more than 40 years ago.

"It's (yield estimate) a snapshot in time, and most of the things that can happen to the crop from here on out are often bad," Harries commented. "But this number is hard to ignore. It was a big day."

The three-day tour is two weeks later than normal, which organizers say will provide more accurate yield estimates since the crop is further along.

The tour made 171 stops through central and northern Kansas and the southernmost counties of Nebraska to measure wheat production and health. Most of the region received several inches of much-needed rain recently, which has improved crop conditions. A few showers and sprinkles fell on scouts as they scoured fields with paper and rulers in hand.

Muddy work boots were a signal that hard winter wheat has the potential to pack on more bushels as it develops thanks to adequate or surplus moisture at this time. Tour scouts said crop development varied widely in many fields due to late planting and crop stress. Some fields are in the joint and flag leaf stage, though most were partly or mostly headed with some in the flowering stage.

"The timing of the recent rains is excellent," said Lollato. "All the water the crop gets now will help yield. I think the 48 bpa (Kansas projection) could be low. Historically, 48 is on the high side, and the state rarely breaks 51 bpa, but there is potential to do that (break 51)."

Sixteen route reports were given Tuesday evening. Scouts said hard winter wheat exceeded expectations, for the most part, though they did encounter a few bad fields. The better fields were in the eastern and central part of the state. Yields ranged from 19 to 125 bpa on Day 1.

Current wet and cool conditions are favorable for yield, but they also promote disease development. Stripe rust was spotted in many fields, but Lollato said not in the amount that is concerning yet. However, that could change.

"Farmers can't spray fungicides after flowering. The window is closing to make that decision," Lollato said.

Estimated yields on color-designated routes, except for one, were much higher than the tour's first day in 2019. That year's first-day average was 46.9 bpa. The routes are the same each year, and fields are picked randomly. Here's the route averages for 2021 and 2019, respectively:

Kansas farmers planted 7.3 million acres of hard winter wheat. Gary Millershaski sowed 5,000 of those acres near Garden City, Kansas, which is in the southwest part of the state.

He thinks the better wheat he witnessed May 18 in the central and northern part of the state will help boost yield averages making the USDA projections "doable." Millershaski said recent rains improved conditions in what was the drought-stricken southwest part of the state, but there are still some tough-looking fields, and more rain is needed.

Only 0.25 inch of rain fell on his fields in April. But Millershaski, a Kansas Wheat commissioner, said 3 inches fell in the last 10 days.

"We were burning up (before the rain)," he said, describing previous field conditions. "The wheat is looking much better now. Wheat seems to have nine lives, and we've only used a couple of them."

Millershaski said 40-plus-bpa hard winter wheat yields are now possible for his operation, which was questionable before the recent precipitation.

Some routes encountered minor freeze damage, mostly in the form of burned leaf tips, from the April cold snap. Read about that here: www.dtnpf.com/agriculture/web/ag/news/article/2021/05/07/winter-wheat-mostly-avoids-freeze. Other routes saw fields that sustained severe hail damage in the northwest part of the state. While devastating to individual farmers, it's not enough to significantly reduce overall production. Other diseases spotted on Day 1, but not in significant amounts, include wheat streak mosaic virus (WSMV) and tan spot.

More stripe rust and WSMV are likely to be seen during the rest of the three-day trek through winter wheat fields, KSU Extension specialists said.

"Stripe rust is one of the top diseases in most wheat-growing regions, and it likes wet and cool weather," said Kelsey Andersen Onofre, KSU Extension wheat and forage specialist.

But on Day 1 of the tour, Tim Aschbrenner liked what he saw. He's the director of flour quality for Grain Craft, one of the nation's largest millers.

"I thought it (hard winter wheat) looked very good so far ... one of the best crops I've seen in recent years," said Aschbrenner, who has attended about a dozen hard winter wheat tours.

On Wednesday, scouts will travel through western, southwestern and south-central Kansas, with one route dipping into northern Oklahoma. The day will end in Wichita. 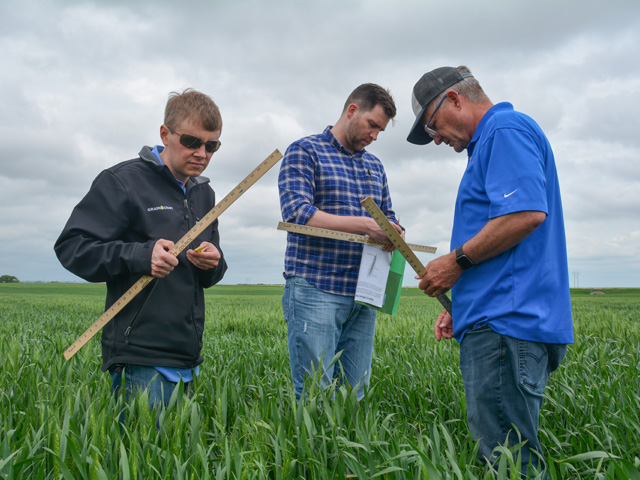