It has become an obsession.

Gaping holes remain in levee R562 in this southeastern tip of Nebraska. Generations had passed without the structure ever yielding to the river. Then, one year ago this week, the "bomb cyclone" weather event launched a devastating flood across the state. The floodwaters broke through the levee and left Adams' 2,000-acre farm nestled between the town and the levee -- 80% of his entire operation -- under 6 feet of water.

The land dried by mid-November 2019. And, after a dry winter and early warm spring, his fields look ready to plant ... if the river allows.

"I have very, very minimal farmland damage, which is 100% surprising," Adams said. "You know, you read all these reports of sand on your property, large channels cut through your farm fields, and that was the hardest part for me is waiting and wondering."

Early last spring, winter continued to stubbornly hang on with low temperatures, snowfall and frozen soils. When the bomb cyclone hit on March 13, rainfall melted most of the snow, overwhelming rivers and streams and wiping out farms and highways, flooding railways and destroying bridges across the state.

The result was extreme flooding from South Dakota to Missouri. Much of eastern Nebraska was under water with nearly every river flooding in the days to follow.

On the northern edge of Peru where Adams' fields lie, water lines stain the outside walls of a group of condemned houses -- a mini ghost town of sorts.

"We're in a vulnerable situation, and to be honest with you, this large breach we have in our levee where the river comes into it, right now at the river levels, we're probably only about a foot away from the river coming in here," he said.

Flood stage in Nebraska City to the north is 18 feet. As of March 18, the river stood at 16 feet.

Because the riverbank is eroded and a large hole remains in the levee, about 16.5 to 17 feet is when the water quit running onto his ground last year, Adams said.

The river at Nebraska City is forecast by the National Weather service as of March 18 to reach 20.3 feet on March 22.

"We won't have any direct losses due to the impact the flood had on farmers, because cities do not tax farm ground," he said. "Our impact came from infrastructure damage. Our water plant and sewage lagoons were flooded and still out of service."

The town sits atop a bluff with Peru State College greeting visitors on the short highway into town. The worn-down road winds its way through campus, descending through downtown and beyond to Adams' farm.

"See that little brick house right there? See the water line still on it?" Adams asks while driving his pickup approaching the farm on the north edge of town. "So that's about how deep the water was right here in town," he said as he stops on a bridge atop a drainage ditch that was overwhelmed by about 6 feet of water last year.

The electronics on his many center-pivot irrigation units are ruined, as they remain in the fields with parts of trees hanging from them. They will take hundreds of thousands of dollars to repair.

The farmstead is scattered with damaged infrastructure.

To the right of the road sits a row of grain bins, two split wide open littering the ground with rotten, rancid grain. One bin is full of corn from the 2018 crop, probably amounting to a half-million-dollar loss.

To the west of the grain bins sits the remains of Adams' shop and other outbuildings, now surrounded by mud. His parents were driven from the farmhouse where he grew up and moved to higher ground.

While a crop is still possible this year, Adams said that, without a levee rebuild, the odds are slim of replacing millions of dollars in farm infrastructure.

"Even for me personally, when we go to rebuild, we probably won't rebuild down here even when we do get our levee fixed," he said. "It's not worth the risk. And the way the river is, you have more frequent flooding. You have less capacity to carry the river with the infrastructure."

Across some fields on Adams' farm, stubble from the 2018 bean crop pokes above the soil. Amazingly, there are few if any signs of erosion or sand deposits.

Driving on the partially gravel-covered muddy roads around the farm, silt deposits filling drainage ditches can be seen.

Most of the gravel has been washed away, and county officials are reluctant to make repairs because floodwaters are likely to return.

WATCHING WATER AND THE CALENDAR

Adams figures he has one, maybe two years before his farm fortunes need to turn. If not, he may walk away.

"Obviously, you still gotta move forward and plan ahead," Adams said. "It's still a business, I'm still trying to run a business. I'm not giving up. If it's dry enough, we're gonna go out and plant and hope for the best and maybe the water will just come up and go right away."

Adams is optimistic. He fully expects to return to a 'normal' flood season this spring. By historical standards, the 2019 flood in the Midwest was an anomaly.

The 40-year-old Adams remembers the river how it used to be as a kid. Now, nine out of the 10 largest floods on the Missouri occurred in the past 30 years.

"What that tells you right there, man, something's changed," he said. "The way we manage the river, everything. Not only the way the management has, the infrastructure's changed. So, these levees were all built in the '50s. Nothing's been updated since the '50s."

The river historically crests in June from mountain snowpack melting and moving south into late May.

Most Peru-area farmers have been seeing ideal planting conditions weeks ahead of schedule, as a result of mild, dry winter and no frost in the ground.

"Even though there is a good soil profile overall, there is some carrying capacity," Adams said about his fields.

Although fields are in good shape for planting, Adams said the return of floodwaters means access roads will be underwater.

Though Adams had property insurance, none of it covered flooding.

"Nobody carries flood insurance because why would you?" he said. "In 50-some years since the levee was built, we've never had it."

Adams said crop insurance companies have reclassified his operation as high risk. Premiums have doubled or tripled on his farm.

"That's eats you up in your bottom line," he said.

"So right there, with the economics of farming already a little tight, I'm already at a $50 to $75 disadvantage because I'm paying a higher crop insurance premium," he said.

Even where levees are fixed on the Missouri side where Adams also farms, there is concern the freshly repaired levees will not hold.

"Just say I do get it all planted, you get maximum inputs out there and you've got corn that's 6-foot tall looking great, and the next thing you know the damn river floods in July," he said. "That's like standing on the edge of the cliff and someone behind you about ready to push you. You're always going to be right on the edge. It's a stressful situation."

The state of Nebraska and others have completed economic studies on how the damaged levee is affecting the area economy -- about $8 million annually in lost revenue.

Adams has been fighting for funding from other sources, as the federal government stopped maintaining the levee.

State Sen. Julie Slama, a Peru native, told DTN the U.S. Army Corps of Engineers is holding firm in its opposition to repairing the levee even though it was active within the Corps system until 2018. The Corps was unable to fix the levee last year because Congress had not appropriated funds.

"USACE will not even provide an adjustment to their repair estimate to the levee, which is an exorbitant $325 million for a 7-mile levee," she said.

"This estimate has provided hurdles to obtaining state or federal funding. As a result, I'm seeking funding on the state level to cover engineering costs for a revised estimate, which will allow the landowners and the city of Peru to chart their course of action in seeking federal funding."

A few weeks ago, Nebraska Gov. Pete Ricketts visited Adams' farm, asking for estimates on how much it would cost just to move dirt back into place on the levee. The governor has vowed to help Adams find funding for an engineering study to return the levee back to Corps specifications.

Adams said that, at some point, he may have to make the toughest business decision.

"And you cannot survive this financially," he said. "There's guys on both sides of the river that this one year is going to break them or hurt them significantly financially. You only can sustain this for so long. For one, financially, and two, emotionally, you're just going to give up. I can't survive this much longer. I'm a fifth-generation farmer. There's some of this land that's been in the family forever. You can't ever replace that."

Adams has two young children who may someday want to continue farming.

"Farming's been good to our family over the years," he said. 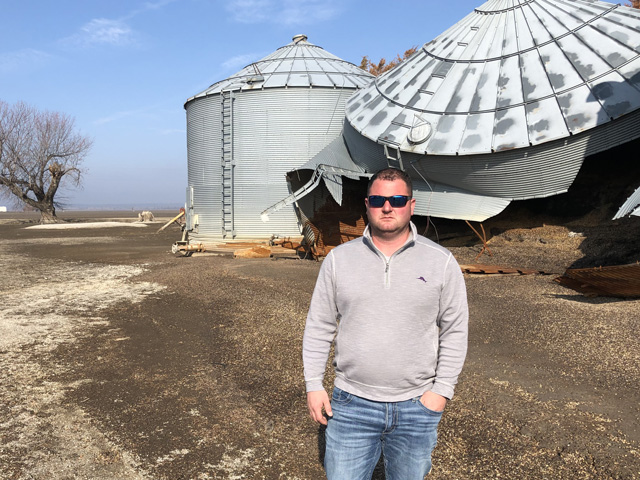