JONESBORO, Ark. (DTN) -- Arkansas farmers could see a narrow window for using dicamba herbicides in soybean and cotton crops next year. The Pesticide Committee of the Arkansas State Plant Board (ASPB) voted on Tuesday to restrict dicamba use in row crops, allowing it only from Jan. 1 to April 15 during the 2018 season.

The committee's actions generally rubber-stamped the recommendations of an 18-member dicamba task force appointed by Arkansas Gov. Asa Hutchinson earlier this summer. The task force was asked to review dicamba technology, investigate current problems with its use and application and make recommendations for future use.

As of Sept. 11, there have been 966 dicamba misuse complaints filed in Arkansas.

The task force came to a consensus on three recommendations around dicamba use in the state:

-- A cutoff date for the in-crop use of dicamba in Arkansas of April 15, 2018, and the need to revisit the issue for the 2019 growing season after more data and research has been collected and reviewed.

-- Increased independent and university testing of new products before they come to market, with an additional stipulation that an entire technology package (seeds and herbicide) be ready for market at the same time.

The pesticide committee recognized that the task force struggled to come to consensus and that the April 15 date was not popular with all farmers or industry representatives as that date greatly limits the post-emergence or "in-crop" use of dicamba formulations known as Engenia, XtendiMax and FeXapan.

However, the committee noted that farmers would still have opportunities to use the formulations in spring burndown or preemergence applications without plant-back provisions required when they used the older, more volatile dicamba formulations. Also, depending on the earliness of planting during the season, the April 15 date might allow some in-season post-emergence applications.

Higher temperatures later in the spring have been tied to the concerns of dicamba volatility or the gassing off of the herbicide. University of Arkansas weed scientists have research to show the new formulations are not totally immune from movement after application and tests are ongoing to pinpoint the environmental conditions that contribute to herbicide movement after application.

The option of regional restrictions versus statewide restrictions was also discussed. David Wildy, a Manila, Arkansas, farmer and member of the Dicamba Task Force, told the committee that the task force "felt it would cause more complications to set up regions" of use.

The question of whether dicamba should be allowed as a fall burndown was also entertained. Ultimately, concern over orchards, homeowner and pollinator habitat prevailed, and the committee opted to recommend the beginning-to-end spray period. Pasture use of dicamba would be excluded from these restrictions since injury reports have not been associated with that use, the committee reported.

The spray ban is far from decided and goes before the full Plant Board during its quarterly meeting Sept. 21. Proposals favored by the full board must then go through formal rulemaking -- which includes both legislative and governor approval.

There was no reference made during the meeting of Monsanto's petition last week challenging the validity of University of Arkansas findings on their product. The company threatened a lawsuit if the state goes through with the proposed ban and if XtendiMax with VaporGrip herbicide is not approved by Arkansas for use during the next growing season. When interviewed by DTN, ASPB staff had no comment other than indicating lawyers are examining the petition.

Late last week, the University of Arkansas issued a statement supporting the findings of their weed scientists. U.S. Congressman Rick Crawford also released a statement on Sept. 13 supporting the university research team and pledging to work at the federal level to make sure decisions on such matters are "left to the states whenever possible."

In 2017, only BASF's Engenia herbicide, an all-new salt of dicamba, was allowed on Xtend crops in Arkansas -- although the state levied application restrictions beyond the EPA label. XtendiMax and FeXapan were not allowed because Monsanto denied requests by the state and University of Arkansas weed scientists to test the compound for volatility prior to introduction.

More than 50 people attended the meeting, including representatives from the major chemical companies. However, public testimony was not allowed during the two-hour meeting. A written BASF statement was made available that detailed how restrictive the April 15 date would be to Arkansas farmers fighting weeds resistant to other chemistries. It mentioned that the restriction is being considered without results from the 2017 season and that "investigations are still ongoing."

Both Monsanto and BASF have stated that their investigations show most of the problems were caused by applicator error and not adhering to the label. "In some cases, the cause and source of spray particle drift are clear in fields our BASF reps have walked," the statement read. "In other cases, the cause and source are undetermined because there appears to be multiple factors at play, including inversions and the lack of adherence to buffer zones or possible tank contamination."

Both Monsanto and BASF have maintained more training can be used to address issues. Rick Cartwright, a University of Arkansas vice president and nonvoting member of ASPB, noted more training might address the need to follow label guidelines, but won't solve other concerns.

"If education could solve this issue, we wouldn't see [nearly] 1,000 complaints in this state," Cartwright said. BASF has sponsored a spray stewardship program since 2012 aimed at training growers and custom applicators.

The committee endorsed the other two recommendations of the task force. One would ensure that the total trait and herbicide package be available before being launched into the marketplace. The committee also voted to ask for a wording change in the Arkansas law that ratchets fines to $25,000 for "egregious" pesticide violations. During the lawmaking process, lawmakers added language that would require regulators prove crop injury also occurred, but the committee agreed that was a flaw in the intent and as written would not deter farmers from using unapproved, more volatile forms of dicamba. The rewording would need to be included in a special legislative session this fall to enact the change.

The law establishing the $25,000 fines took effect Aug. 1, but will not be retroactively to this summer's complaints. Almost all of those investigations are still under investigation. 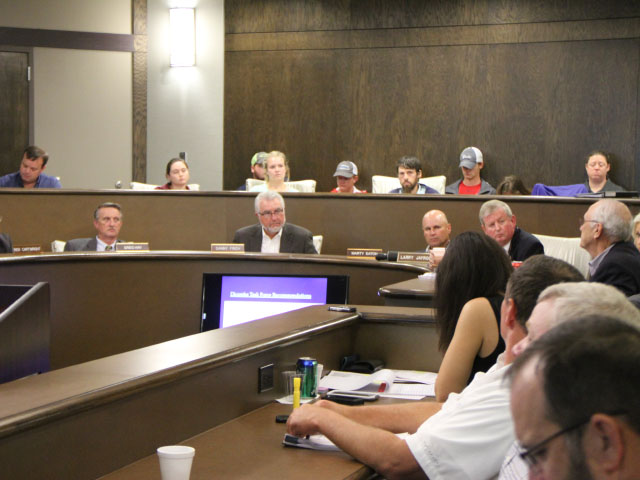