ROCKVILLE, Md. (DTN) -- Volatile seems to be the word of the season in farm country this year.

Between rocky markets, herbicide drift and crop conditions that seem to vary mile to mile, it's been an unpredictable season, farmers told DTN.

Some growers are seeing excellent crops and well-timed rains; others are parched or watching early season flood damage take its toll in the summer heat. Markets and weeds have proven stressful this summer, and dicamba drift is a common topic in many coffeehouses and farm offices.

"Beans are blooming, and corn is silking," said Gauck, who farms in southeast Indiana. "We probably won't harvest until about October 1."

He and Wallis, who farms in southwest Indiana, caught timely rains after a drier start to the summer -- a common theme for many, including Kansas farmer Doug Zillinger. Although grasshoppers have been in abundance in his area, Zillinger's sorghum, beans and corn are thriving.

For others, variability is the name of the game.

Those earlier problems are on display for John Werries, who farms near Chapin, Illinois. "Our crops are hurting," he said. "We are in an area that keeps missing the rain. The corn in the low areas that was stressed from too much water in April and May has turned yellow, fired up and is now dying."

Even corn that looks good from the road proves in poorer shape deep in the field, with tipback rates pushing 25%, Werries added.

Jay Magnussen is seeing similar problems in northwest Iowa, where his farm has seen barely 3 inches of rain this summer.

"I personally will have corn yields down 15% to 20% from the good crops we had last year," he predicted. "During corn pollination it was very hot and dry, so I am seeing some variable pollinations."

Crops might not be at their best, but diseases, insects and weeds are still thriving, farmers reported. From gray leaf spot in Ohio to aphids in Iowa and giant ragweed in Illinois, applicators have been busy.

Perhaps no one faces a greater uphill weed battle than Plummer, who grows non-GMO soybeans in Indiana.

"Our herbicide program for pre- and post-application on these beans includes seven different compounds at various rates, but we continue to get poor control of [giant ragweed]," he said. "We will be making a decision on whether to continue to produce these beans in the future after harvest."

Raising non-GMO crops has given Plummer a different perspective on the dicamba drift complaints spreading through Southern and Midwestern states this summer. "The drift issue is nothing new here as we have received damage to non-GMO corn and soybeans from Roundup every year for the past several years and nothing is ever done about it," he explained.

The issue is newer to other farmers, including Iowa's Jay Magnussen, who has seen a range of dicamba drift this year.

"Dicamba has dominated my summer," he said. "I think the dicamba trait is a very good tool in the toolbox, but I'm afraid we will not be able to spray complete fields with it. Maybe we will need to leave a buffer between dicamba and non-dicamba beans no matter what the wind direction is."

The future of the dicamba herbicide labels is dominating discussions in southern Indiana, as well, said Wallis.

"We have been hit multiple times," he said. "We believe even if the farmer or the applicator does everything they are supposed to, it can move off target. We hope there is an adjustment to the label before next year."

With corn and soybean prices swinging up and down on a near-daily basis the past few weeks, some farmers have been feeling a little queasy.

"I'm very upset with my marketing," said Ohio farmer Keith Peters. "Now that I see my yields will be decent, I'm only about 50% sold. I hope we can get a scare and get back to $4 and close to $10."

Magnussen expects markets to continue their wild ride as the first harvest reports begin rolling in -- in which case, Zillinger recommends keeping some perspective.

The tension in farm country over the current economic situation reminds the Kansas farmer of the '80s. "The toll on the human body is a little more than need be," he noted.

In the meantime, he recommends stressed growers "take a deep breath and let it out slowly."

Or you can do what Werries is doing -- focus on the next season. "I'm already looking forward to next year," he concluded. "We are going to make some changes that we are confident that will get our corn and beans off to a better start."

Editor's note: The DTN agronomy editors routinely poll growers scattered around the country to get thoughts on crop conditions. If you'd like be considered, reach out to Pamela.smith@dtn.com. 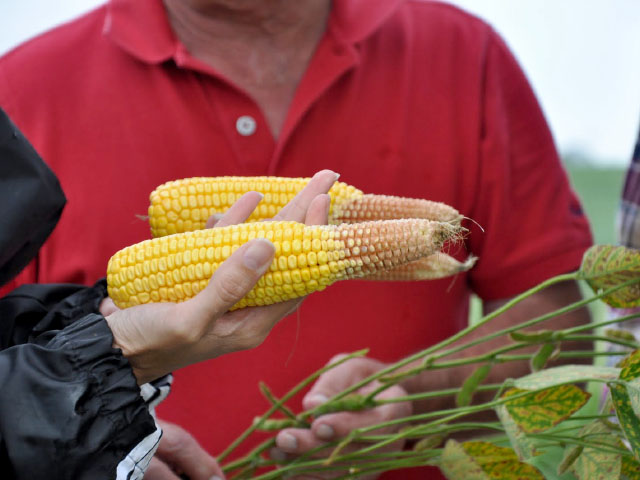