DECATUR, Ill. (DTN) -- Bayer has confirmed it will sell its LibertyLink trait technology and Liberty herbicide business to satisfy antitrust approvals in their quest to purchase Monsanto.

"Bayer has received conditional approval of its proposed acquisition of Monsanto in South Africa. This approval is an important step in the overall merger process," the company told DTN in a prepared statement.

Bayer is looking at the best way to sell off those LibertyLink assets as a condition of approval by South African regulators, the company stated.

"The conditions from the Competition Commission South Africa include the divestiture of Bayer's global LibertyLink trait technology and the associated Liberty branded agro-chemicals business. Bayer has agreed to these conditions and is evaluating how best to execute the imposed divestiture."

Crops containing the LibertyLink trait include canola, corn, cotton and soybeans. Liberty herbicide is approved for use over a wide range of crops beyond the trait technology and glufosinate is sold as a generic herbicide. Bayer licenses the LibertyLink trait widely to other seed companies and maintains its own branded seed lines in canola, cotton and soybeans. Whether the sale might include Bayer selling the seed businesses along with the trait and herbicide businesses is something the company spokesmen would not confirm.

The company had previously communicated that it anticipated regulatory authorities could require certain divestitures. The sale being imposed by South Africa is estimated to account for $2.5 billion in assets. While the country of South Africa represents a small sales market for Bayer and Monsanto, the investment trade press has speculated that the sale of the Liberty lineup might come close to satisfying antitrust regulators in larger markets, such as the United States and the European Union.

There has been speculation that the overlap in the vegetable, canola and cotton businesses might be targeted for divesture. However, this is the first time Bayer has acknowledged that they would be willing to sell the Liberty businesses to gain the $66 billion Monsanto deal. Investment analysts, who preferred not to be identified, said the cooperative attitude sends a positive message to other regulators.

Upon the news of potential sale, Arkansas weed scientist Ford Baldwin wondered if regulators realize practical repercussions might occur in the farm field with the move. Liberty herbicide (glufosinate) along with the LibertyLink trait has become an important defense for growers facing glyphosate resistant weeds. Bayer's marketing philosophy has long encouraged rotation of chemistries and keeping weeds confused to head off resistance.

Meanwhile, EPA granted Monsanto's new Xtend technology a two-year conditional registration and thereby challenged spray applicators to prove they can keep the herbicide from drifting. Misapplication and other problems resulted in many damage complaints across the Midsouth last year. New lower volatility formulations have since become available, but the dicamba technology comes with a long list of spray application restrictions.

Who might purchase the Liberty platform is the other question. German agrochemical company BASF has said they are shopping for spin off properties from current company tie-ups, however officals have always said they prefer to provide traits to seed companies, not be a seed company.

Australia-based NuFarm, which pegs itself as the eighth largest crop protection company in the world, has publically stated current consolidation in the global crop protection sector will provide it with opportunities to pick up assets.

Other mentions include Iowa-based MS Technologies, a company collaborating with Dow AgroSciences on a soybean that would meld glufosinate, glyphosate into the Enlist (2,4-D) trait system.

Meanwhile, Baldwin, who does consulting work for Bayer, said licensing agreements should eventually stack many of these traits together, but that may be years down the road.

In its statement, Bayer said it plans to continue working with regulators globally with a view to receiving approval of the proposed transaction by the end of 2017. 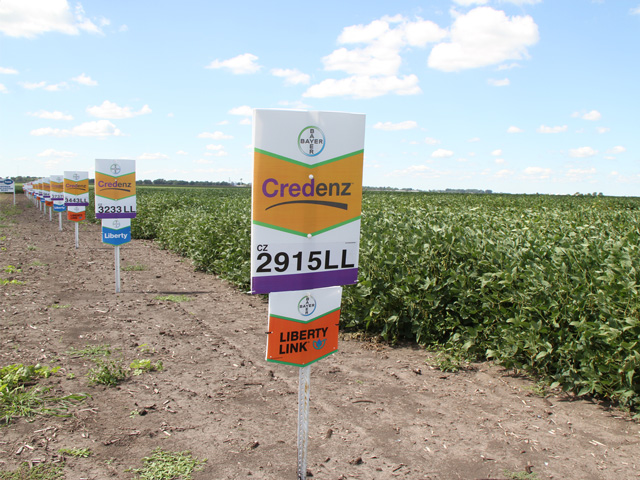