ROCKVILLE, Md. (DTN) -- Kyle Kiefer was just a kid when he last witnessed the European corn borer at work. It was his job to clear the combine header of snapped and lodged corn plants, their stalks hollowed out by the tunneling pest.

The southern Illinois farmer isn't keen to return to those days. By the time he left school and started farming full time, Bt corn was controlling the pest so well, it slipped off his radar. Until this year, that is, when corn borer infested his non-GM corn acres and cost him up to a dozen bushels per acre in some fields where he farms near Belle Rive, Illinois. He estimated one non-Bt field was 20% lodged by harvest.

Lured in by reliable premiums ranging from 30 to 70 cents per bushel, Kiefer had devoted more and more acres to non-GM corn over the past five years. By the summer of 2016, non-GM hybrids accounted for up to 80% of his corn acres.

"There would be years that you would see European corn borer moths come and go, and there was always some light pressure but nothing extreme," he recalled. "This year, they just ate it up."

The damage was so discouraging that Kiefer is re-thinking his 2017 hybrid selection. "Originally, I was planning on booking all non-GMO corn, but I'll probably do just 25% now," he said.

The story is a familiar one to Burrus Hybrids agronomist Stephanie Porter this year. "Corn borer issues were huge," she said of her territory in Illinois. "We saw a lot of it in the non-GM corn but also in some areas in the north and south, where the damage was so bad you could look at a field and pick out the [non-Bt] refuge."

The rise in non-GM corn acres in the state is a possible culprit in these localized resurgences of this pest, entomologists told DTN.

European corn borer pressure across the state was spotty, but telling, said Kelly Estes, state survey coordinator of the Illinois Cooperative Agriculture Pest Survey. Of all the pheromone traps scattered across the state, only one trap in Madison County pulled in corn borer moths all summer long.

"It was placed right next to a non-GMO field," she said. "Everywhere else, I had zero moths."

The corn borer overwinters in corn residue and debris and pupates in the spring. Two Bt corn traits -- the Cry1Ab protein in Yieldgard hybrids (Monsanto) and the Cry1F protein in Herculex hybrids (Dow AgroSciences and DuPont Pioneer) -- have been so effective at controlling the pest that over time, many universities slowly stopped surveying regularly for it, Porter noted.

Estes said University of Illinois Extension conducted a labor-intensive, 10-county scouting and monitoring effort for the corn borer for decades.

"We did it for so long, but because of traited corn, we just kept getting zero pressure," she recalled. "Every year there was a debate and finally, we stopped."

That was around five years ago -- just as non-GM corn premiums began to pick up and attract farmers like Kiefer.

Kiefer said those premiums have become scarcer and harder to secure these days. Tight margins and frustrations with seed prices continue to drive some farmers away from fully traited corn seed, however.

In an ongoing DTN 360 Poll on how growers plan to save on seed prices in 2017, 16% of the 240 respondents indicated they will plant seed without GM traits, such as insect or herbicide resistance.

Growers who opt for non-Bt hybrids in 2017 in Illinois and other Corn Belt states should be aware that the pest is present and active, Estes and Porter said.

Fields most at risk could include continuous non-GM corn fields and no-till fields with plenty of corn residue for the final generation of corn borers to overwinter in. However, corn borer moths are quite mobile, and often survive on weedy plants along field edges, so crop rotation and destroying residue are not reliable methods of controlling them.

The pest can produce up to three generations each summer. The first generation of larvae bore into stalks and midribs and leaves of young corn plants, leaving a tell-tale pattern of evenly spaced holes as the plants grow. Second generation larvae can also target the ears.

Because the corn borer by definition spends most of its time burrowing deeper into the stalk and the plant, treating it is a challenge. The spray window for both the first and second generation is quite small, so growers who hope to catch it will have to rely on diligent scouting, degree-day calculations and possibly a pheromone trap. See more details from this University of Illinois Extension guide here: http://bit.ly/…. 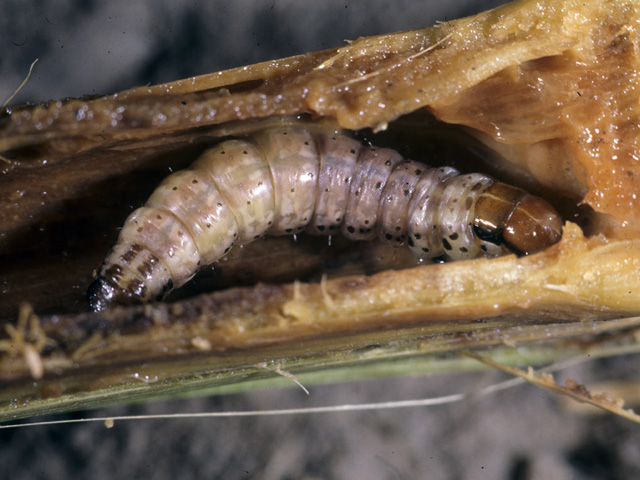