Agritechnica -- a biennial extravaganza drawing about 400,000 visitors to Hannover, Germany -- celebrates the latest in farming technology. It also hosts forums on a variety of related topics. This year a panel of German government, academic and industry experts discussed why the explosion of modern technologies still has not solved the riddle of widespread food insecurity. With the world's population set to expand even more, the question becomes: "Can farming technology do better?"

Gerd Muller, German federal minister for economic cooperation and development, started the discussion with an attention-grabber: "Hunger is murder," he said through an interpreter.

He then put a positive spin on the issue: "A world without hunger is possible." Ethical and moral imperatives should spur developed nations to confront food insecurity in other parts of the world, he said, "But it is also in our own interest, because those people will come to us [Europe]" if they cannot feed their families.

AGCO Chairman, President and CEO Martin Richenhagen underlined that point. Speaking in his native German through an interpreter, he said that if developed nations can help cure hunger, they could "end the refugee crisis."

To illustrate AGCO's commitment, Richenhagen told the audience that the company had recently changed its mission statement, which used to call for "Solutions for professional farmers feeding the world."

He explained, "We dropped the word 'professional,'" to emphasize that AGCO would develop products for small-holder farms who need "simpler solutions."

Much of the discussion was about technology, and Muller called for a "second Green Revolution" based on technology and subsidies from developed nations.

Joachim von Braun, director of the Center for Development Research at the University of Bonn, suggested that gene-editing technologies should develop new seed varieties adapted to Third World growing practices and conditions.

He said precision farming techniques that increase efficiency for large farmers also could be adapted to small-holder farms. That will require new energy sources, von Braun said. Improved irrigation techniques also are vital, especially considering that climate change is drying up some parts of Africa.

Muller noted that an international conference on climate change was taking place in Bonn at the same time as Agritechnica. "Energy is a prerequisite for development in agriculture and everything else," he said. Alternative energy sources can be critical to attacking hunger issues. "Climate protection does not destroy jobs," he said. "It creates jobs."

Richenhagen said that AGCO believes it can sell farm equipment to small holders and make a profit. With that in mind, AGCO a few years ago established a factory in Algeria to produce small tractors for Africa. "Financing is not the problem," he said, "training is."

AGCO set up a teaching facility in Zambia to train small-holder farmers not only in tractor use, but also in maintenance and repair, something that is vital in a region where dealers are virtually nonexistent.

Africa has the largest number of arable acres in the world and also has good soil and adequate water resources, Richenhagen said. "Africa is a market for the future. We believe Africa can be a breadbasket for the world," he said. 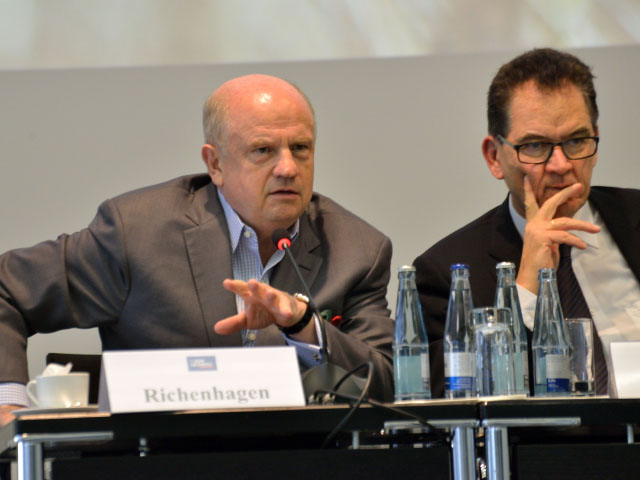