On Oct. 3, the U.S. Army Corps of Engineers (USACE) St. Paul District began to lower the Mississippi River water level immediately below St. Anthony Falls in downtown Minneapolis, Minnesota. The purpose of drawing down the river is to allow for inspection of infrastructure that is normally underwater.

"These inspections involve engineers looking at a variety of things in and around a lock to ensure the structure is sound and can safely perform when needed. Much like routine maintenance on a car, these inspections help identify areas that could require additional reviews and maintenance. Understanding these areas allows Corps officials to request and receive the necessary funds before a problem becomes a major issue. The last periodic inspections at these sites was completed in 2015," said USACE.

The last time the river was drawn down was in 2008.

In 2015, the Upper St. Anthony Falls lock was permanently closed to stop the spread of invasive species, mainly Asian carp, but the lock is still used occasionally to reduce flood risk. While Minneapolis is considered the head of navigation on the Mississippi River, the locks in Minneapolis are smaller than most of the locks on the rest of the river, with the practical limit for many commercial tows still further downriver, according to Wikipedia.

In order to safely complete the inspections, engineers will open the dam gates at the lower lock to allow the river level between the upper and lower lock to drop from its current elevation of 750 feet to a level around 738 feet. The river levels upstream of Upper St. Anthony Falls will not be affected, according to the Corps.

"The drawdown is expected to begin Oct. 3 and the plan is to reduce the water elevation by approximately 4 feet per day until reaching the target level, which is expected to occur Oct. 6. Engineers will hold the river level here for two days to allow for site inspections at both locks. River levels will gradually return to normal levels once the inspections are complete," said the Corps.

The St. Paul District operates and maintains 13 locks and dams beginning at Upper St. Anthony Falls in downtown Minneapolis and ending at Lock and Dam 10 in Guttenberg, Iowa.

The James J. Hill Stone Arch Bridge was built between 1881 and 1883 to carry the Minneapolis Union Railroad over the Mississippi River just below St. Anthony Falls in Minneapolis, according to the Minnesota Department of Transportation (MnDOT). The Stone Arch Bridge saw its last passenger train cross in 1978 with the line officially abandoned in 1987. It was then converted for pedestrian use. The Stone Arch Bridge spans the river between the locations of the flour mills that once stood. At the peak of the flour industry, more than 20 stone flour mills stood along a covered canal, flowing with water drawn from the river above the falls.

According to the Minnesota Historical Society, the flour-milling industry in the mid-19th century established Minneapolis as a major U.S. city. While lumber sawmills arrived first in the 1840s, they were supplanted within decades by the flour mills. It was the extraordinary power-generating potential of the falls' 50-foot drop that brought the two industries to Minneapolis, though the heyday of flour milling outlasted that of sawmilling by several decades.

The flour-milling complex spawned a host of innovations in manufacturing and processing. The leaders of the Minneapolis milling industry, including the Washburn, Crosby and Pillsbury families, invented equipment and techniques that improved the quality of flour and increased production efficiencies. White flour, something once seen as a luxury for the rich, was brought to the masses. New flour-based products, such as cake mixes, created an entirely new market for flour.

In 1880, and for 50 years thereafter, Minneapolis was known as the "Flour Milling Capital of the World" and is still referred to as the Mill City. In 1928, the Washburn-Crosby Company merged with 28 other mills and was renamed General Mills. Eventually, in 2001, General Mills bought Pillsbury, finally uniting Minnesota's two largest flour manufacturers. The Pillsbury A Mill was the last riverfront mill to shut down in 2003.

During the current drawdown of the river, the structure of the Stone Arch Bridge will also be inspected. According to MnDOT, the bridge has been through about half a dozen projects to expand, repair or rehabilitate the structure over its almost 140-year history. When I was there on Oct. 7, there were crews inspecting the bridge columns on the now-dry river bottom, as well as drones inspecting newly exposed areas of the bridge.

When I looked up at the Stone Arch Bridge looming over me where 12 feet of water had been, the movie "20 Thousand Leagues Under the Sea" popped into my head.

The river bottom exposed many "treasures," such as scooters, many tires, a shopping cart, pails, cans, construction cones and even a bicycle among countless other objects. There were workers busy cleaning up the garbage; I saw countless garbage bags already filled and many larger discarded items stacked on the riverbank.

However, my grandsons, who were filling their pockets as they wandered around on the river bottom, will tell you that they found the best treasures. When we got home, they emptied their pockets and claimed, "Look Grammy, we found sea glass!" I was able to salvage about five of the 20 pieces of the broken glass they had found in the sand that were not sharp-edged, but they were still pretty proud of their stash of glass and rocks and couldn't wait to tell their teachers and classmates about their field trip.

Here is a link to more information on the Stone Arch Bridge and the Upper and Lower St. Anthony Falls Lock and Dam: 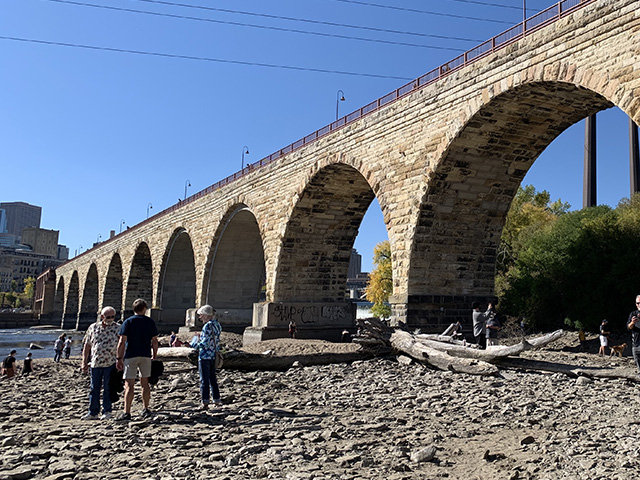