LINCOLN, Neb. (DTN) -- Agriculture interest groups and food companies told the U.S. Securities Exchange Commission the proposed climate-reporting rule could ultimately threaten the future of rural communities by requiring farmers and ranchers to spend more time and money to comply at a time when margins are tight.

The SEC closed a public-comment period on June 17 for the "Enhancement and Standardization of Climate Related Disclosures for Investors" proposed rule that would require publicly traded companies to report data about their entire supply chain.

The rule would affect farmers and ranchers who do business with those companies.

In comments submitted last week, a group of 11 agriculture interest groups touted the work of farmers and ranchers in reducing greenhouse gas emissions.

"Over the past two decades, farmers and ranchers, many of whom make up the members of our organizations, have worked to reduce per capita agriculture emissions by 20% and reduce greenhouse gas emissions from livestock by 11% for beef, 21% for swine and 26% for dairy, all while increasing productivity and output across the agriculture industry," the groups said.

"Just as impressive, over the past three decades cropland has declined by approximately 30 million acres yet productivity has continually risen over the same time period. Compared to 1948, farmers and ranchers are producing 2.78 times more in output per unit of input, according to estimates from the United States Department of Agriculture's Economic Research Service."

"Without changes and clarifications, the proposed rules would be wildly burdensome and expensive if not altogether impossible for many small and mid-sized farmers to comply with, as they require reporting of climate data at the local level," the groups said.

"When farmers and ranchers cannot afford the overhead required to comply, they will have no choice but to consolidate. Such consolidation would have far-reaching socioeconomic consequences, including further eroding rural tax bases. Because of population decline in rural communities, farmers and ranchers are already bearing a greater share of the tax burden for rural communities."

The ag groups said such consolidation would hurt rural communities when it comes to funding education, social services and health care.

"It is important to also realize that farming and ranching plays a vital role in the social fabric of rural communities that largely revolve around the agricultural industry, especially small and medium-sized farmers and ranchers," the groups said.

The groups asked the SEC to remove the value-chain concept from the rule, to provide an explicit exemption to agriculture, to provide guidance on reporting for manure management systems, and that final rules do not require entities to report location data which could lead to release of private information.

"Nearly every farmer and rancher, irrespective of size, at some point finds themselves in the upstream or downstream activities of a registrant's value chain," they said in comments.

"Registrants have already indicated to us and our members that the proposed rules will inevitably require them to pass the costs and burdens of reporting Scope 3 emissions onto the farmers and ranchers. This is particularly problematic for our small- to medium-sized family-owned farms (i.e., 98% of all farms) and ranches, which are already dealing with increased production costs due to inflationary pressure and global supply chain disruptions.

"The burden of providing such disclosures and the estimation process would be hard for farmers and ranchers to overcome. The average family farm already must take significant time away from the actual business of farming to demonstrate compliance with a tangled web of federal, state, and local regulation."

The National Council of Farmer Cooperatives told the SEC farmers and ranchers "lack sophisticated technology" to be able to track emissions.

"As the data required to provide information for Scope 3 reporting does not exist, producers would need to make significant investments in new tools and procedures to produce emissions data."

The National Grain and Feed Association, American Feed Industry Association and North American Millers' Association said the SEC has done little to account for how the rule affects the value chain.

"When estimating the incremental and aggregate burden and costs for the proposed requirements, SEC does not consider those that would be placed on non-registrants that are a participant of a registrant's value chain," they said.

"These burdens and costs likely will greatly exceed those for registrants."

Canadian fertilizer giant Nutrien Ltd. said in comments the rule would conflict with reporting requirements it has in Canada.

"These conflicting standards add to the complexity of adoption, regulatory burden and cost of compliance," the company wrote.

"We have estimated that the direct and indirect costs of compliance ranges from $35 million to $55 million. These costs include internal costs, external professional service fees, and additional systems and internal control processes that will need to be designed and operating effectively for public disclosure of high-quality information."

Nutrien, on its website, states the company will reduce Scope 1 and 2 emissions 30% "per (metric ton) of our products produced from a baseline year of 2018."

Tyson Foods said although it supports "visibility of and access to material" on climate-related information, companies Tyson does business with, including farmers and ranchers, will find it challenging to comply.

"Therefore, we encourage the commission to create more flexibility in the proposed rule to accommodate the distinct differences among industries, expand safe harbor protection for required disclosures, extend compliance timetables, and recognize the potential chilling effect of the proposed rule on innovation and the desire to provide transparent information to combat climate change," Tyson said.

Tyson, on its website, states the meatpacker will reduce its greenhouse gas emissions 30% by 2030 against a 2016 baseline year.

"By pushing for such immaterial disclosures, the commission will bury investors in useless information that will hamper their abilities to make informed decisions," the foundation said.

"Second, this information threatens expansive liability for errors in meeting the vague disclosure standards. Third, given the uncertainty in the requirements, the proposed rule violates clear First Amendment limits on what kind of speech the government may compel."

"The administration has tried and failed to impose regulation directly, and it now appears content to use back-door financial regulatory actions to implement its political will," the attorneys general wrote.

"But it is up to lawmakers to decide major policy questions like these, not unelected agency administrators. The states thus object to the proposed rule on three fundamental bases. First, the commission lacks statutory authority to issue it. Second, the rule would violate First Amendment rights. And third, the rule does not reflect reasoned decision making and so would fail arbitrary-and-capricious review."

Earthjustice wrote comments in favor of the rule, saying information about companies' own emissions and their exposure to such risk is "material to investors' investment and voting decisions.

"This is especially so for firms in the industrial agriculture sector, where climate change poses significant financial risk to the underlying business," the group said.

"Indeed, warming temperatures and extreme climate events such as floods and droughts, extreme heat, and dangerous storms, threaten overall productivity, the health of the labor force, production efficiency, and regulatory compliance. And given the complex and lengthy chain of upstream and downstream suppliers, there is currently little transparency into the true climate-related financial risk inherent in these industrial agriculture firms."

Companies would then be required to report how their meeting climate pledges. 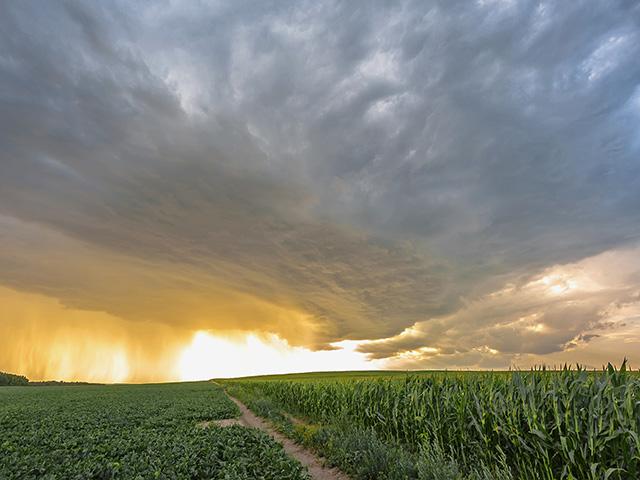