In January 2019, the U.S. District Court for the Southern District of Iowa in Des Moines ruled the 2012 law was a violation of free speech. The groups led by the Animal Legal Defense Fund filed the new lawsuit in the same court.

"We are working with the attorney general's office to ensure this legislation that supports farmers is upheld," she said in a statement on Monday.

"The ag trespass bill is designed to protect Iowa farmers from safety threats or biosecurity risks that untrained people on their property may cause. I am committed to protecting Iowa farmers and ensuring the safety and security of their livestock."

The 2012 law came about after at least a couple of widely publicized investigations into hog operations. The law made it illegal to enter a livestock facility under false pretenses, or lie on a job application to work for a livestock operation. It was meant to effectively criminalize undercover investigations on livestock farms.

In the new lawsuit, the animal rights groups compare the new law with the previous law, calling them "substantially similar" and outlining how the new law is overbroad. Further, the groups provide details of planned investigations into agriculture operations that would be thwarted by the new law.

Iowa Citizens for Community Improvement, Bailing Out Benji, People for the Ethical Treatment of Animals and the Center for Food Safety also are plaintiffs to the new lawsuit.

"Factory farms want to hide their abuses, and in some states, lawmakers have been happy to help by passing ag-gag laws," Animal Legal Defense Fund Executive Director Stephen Wells said in a statement. "But federal courts have consistently ruled that these laws violate our constitutional rights. Ag-gag laws are a threat to food safety, animal protection, the environment, and workers' rights."

The new law prohibits what it calls "agricultural production facility trespass." It makes it illegal for a person to gain access to an ag facility through deception if the intent is to cause an "injury" to the "business interest" of the facility.

"The statute's legislative history demonstrates that it was introduced with the explicit intent of silencing or impeding speech by animal protection organizations," the lawsuit said.

The 2012 law used similar language as the new law, in prohibiting what it called "agricultural production facility fraud." That was defined as obtaining access to an ag facility through false pretenses, and making false statements or representations on applications for employment with ag facilities.

The new law also prohibits access to an ag facility by using deception "on a matter that would reasonably result in a denial of access to an agricultural production facility that is not open to the public." The new law was designed essentially to prevent "economic harm" or "other injury" to the facilities, equipment, employees and even customers.

The groups allege the new law also impedes on the free speech of other groups, including members of labor unions.

The lawsuit said the new law already has put a chill on potential future undercover investigations. The groups said there are no other laws in Iowa that "target a specific category of whistleblowing, investigations or investigative journalism" in a particular industry.

"Under Iowa's new ag-gag law, gaining employment or access through misrepresentation or omission to an agricultural production facility in Iowa, with the intent to expose truthful but critical information -- the natural result of which is economic harm in the form of boycotts and related reputational harm -- would be a serious misdemeanor," the lawsuit said.

"Thus, ALDF and PETA are impeded from gaining access to the facilities."

The groups said they have identified Iowa ag facilities where they would like to conduct "undercover, employment-based investigations, but it has not pursued such investigations due to its reasonable fear of prosecution" under the new law.

"After Iowa's first ag-gag law was struck down, ALDF took steps towards retaining a licensed investigator to conduct an undercover investigation at an agricultural production facility in Iowa, but immediately put those plans on hold when Iowa passed its new ag-gag statute, due to its reasonable fear of prosecution under that law," the lawsuit said.

Because ag employers in Iowa ask potential employees about their connections to animal rights groups, the lawsuit said it makes it "even more likely that an undercover investigator will have to misrepresent his intentions to conduct an investigation."

The groups asked the court to declare the new law unconstitutional.

"The new ag-gag law is a content-based restraint on constitutionally protected speech on a matter of significant public concern," the lawsuit said.

"It is not narrowly tailored to a compelling government interest. By singling out the agricultural industry for protection against political speech that may be harmful to its profits, the new ag-gag law must be treated as a content- and viewpoint-based regulation. Shielding an industry from criticism cannot be considered a legitimate, much less a 'compelling' government interest."

Iowa joined several states in adopting what opponents call "ag-gag" laws because of videos generated by such investigations showing what is perceived as abusive behavior toward animals.

Similar cases have overturned laws in Idaho and Utah in recent years, but a Wyoming law has been upheld in court. Similar cases are still working through courts in North Carolina. 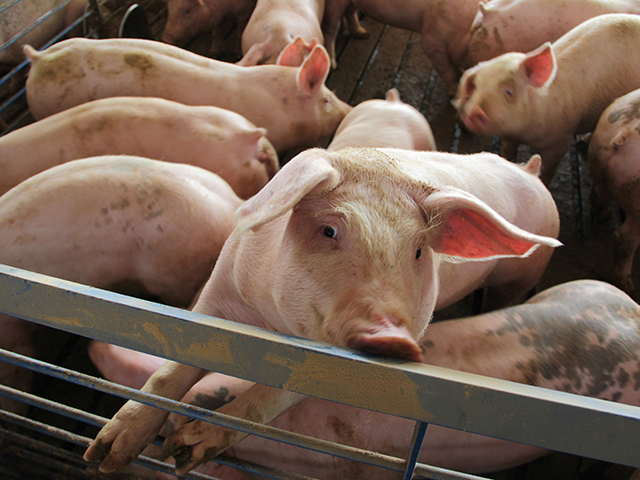