WASHINGTON (DTN) -- Agriculture and food were the focus of a forum on the North American Free Trade Agreement on Wednesday as several Beltway insiders highlighted their concerns about the possible direction of the NAFTA renegotiation.

The U.S. also imports $45 billion in agricultural products from the two countries. A lot of processed foods and proteins come from Canada while per-capita consumption of fruits and vegetables has jumped since NAFTA went into effect because of products coming into the country year-round, largely from Mexico.

Agricultural groups pointed out some of their concerns as NAFTA renegotiation talks continue later this month in Ottawa, Canada, while the U.S. still does not have a Senate-confirmed chief agricultural negotiator or a USDA undersecretary for trade.

The large volume of fruit and vegetable imports has led to more U.S. jobs processing those products; however, some fruit and vegetable growers have been frustrated by increasing imports from Mexico. Florida growers, for instance, want to see restrictions, said Tom Stenzel, president and CEO of the United Fresh Produce Association. Stenzel said Mexican apple growers might have the same take on product restrictions as Florida tomato or strawberry growers. He also cautioned against adding language to NAFTA regarding dumping of seasonal products. He said there are other ways to help domestic producers, such as supporting the industry in the farm bill.

At the same time, domestic growers of some products have taken advantage of the imports. Stenzel pointed to avocados, which have had a 400% import increase to the U.S. under NAFTA. Yet California growers are more profitable, Stenzel said, and have taken advantage of the growing avocado demand. "If you are just strictly looking at goods and what crosses the border, you are missing the integration and the economic well-being of trade, and that goes in both directions, as well," Stenzel said.

The value chains have also become intertwined. U.S. pork producers will import Canadian feeder pigs that are raised and processed in the U.S., then the meat is exported to Mexico or back to Canada as well, Glauber noted. "There would be a big cost to disrupt that with the imposition of tariffs and other things," he said.

Melissa San Miguel, senior director for trade at the Grocery Manufacturers Association, reiterated that point, noting that food processing is the largest actual manufacturing sector in the U.S. in terms of jobs, but the food-processing industry has developed supply chains relying heavily on the free flow of commodities in North America.

Martin said NAFTA has become a lynchpin of the grain trade and is largely done in a zero-tariff environment. Martin said the NAFTA renegotiations provide an opportunity to improve the regulatory environment and force governments to improve their data systems.

Wanting to see some changes in NAFTA is the U.S. dairy industry. Jaime Castaneda, senior vice president of strategic initiatives and trade policy for the National Milk Producers Federation and U.S. Dairy Export Council, noted that the U.S. exports roughly 15% of overall dairy production, valued at about $5 billion in export sales. Still, the dairy industry hasn't benefited as much from NAFTA.

"We're coming from a different perspective where our members are basically saying, 'You need to fix,'" Castaneda said.

The U.S. exports about $1 billion in dairy products to Mexico -- the largest market for U.S. dairy -- but most exports to Canada are largely through a complicated re-export program and the U.S. faces tariffs as high as 300% for some dairy products going into Canada. Further, Castaneda pointed to Canada changing its classes of milk prices to prevent U.S. imports but also allow Canada to dump products on the international market. Castaneda said this shouldn't happen with a country such as Canada that has such a restrictive supply management system for dairy.

"So, for us, this is one of the most important elements of these negotiations," he said. "If this is not addressed in these NAFTA negotiations, for us, this would be a failure. We cannot accept that Canada not only gets away with preventing our trade, but actually dumping products and affecting the international market."

The dairy industry is also concerned about Mexico's current negotiations with the European Union. To dairy, NAFTA is in a race to protect that $1 billion in dairy exports because the EU wants Mexico to use "geographical indicators" to restrict the use of terms such as "parmesan" and "asiago." The EU would essentially take away the market and names that the U.S. industry helped brand in Mexico.

"So if Mexico, just like Canada, takes away the opportunity for us to sell cheeses such as parmesan or asiago or feta, that is a market access issue for us, and we cannot permit that to happen," Castaneda said.

Castaneda pointed out that language in the Trans Pacific Partnership on intellectual property would have protected the U.S. dairy market from EU demands in Mexico, but the U.S. withdrew from that trade deal after President Donald Trump took office. Glauber added that agricultural interests in the U.S. have had to do a 180-degree turn from a year ago when talk was about approving TPP and getting a trade deal done with Europe to now protecting current market access the U.S. already built up in NAFTA.

The trade experts also pointed out that the three countries have put themselves on a tight schedule compared to the time it often takes to negotiate multi-nation trade agreements. This is more difficult considering the NAFTA talks will be heading into the third round later this month in Ottawa, Canada, while the chief agricultural negotiator in the U.S. Trade Representative's Office and the trade undersecretary position at USDA are still unfilled. Those vacancies have disrupted communication channels between the industry and the Trump administration, said Gary Martin, president and CEO of the North American Export Grain Association.

The grain industry has been forced to use different ways of communicating messages to explain where the industry is coming from, he said.

"We have got to engage locally and have that local flow of information, well-informed information, and impact not quite so directly the process that we are used to, but today's world is different and information moves through different channels," Martin said. 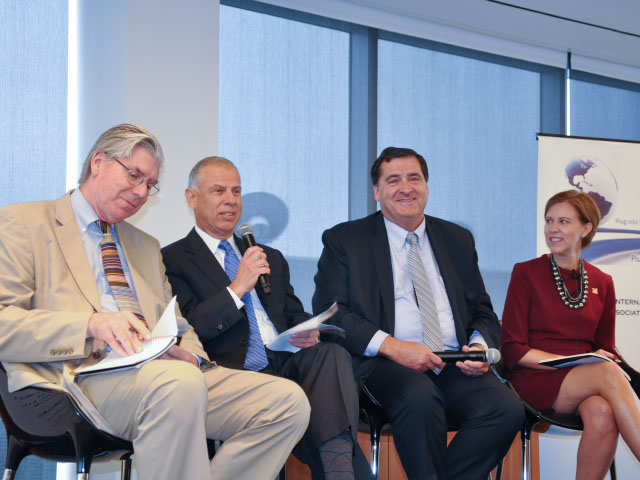