CEDAR RAPIDS, Iowa (DTN) -- President Donald Trump told Iowa farmers and ranchers Wednesday evening that he will continue to stand with them on a number of issues.

During a campaign-style rally, Trump said he will defend attacks on ethanol, work to eliminate the estate tax, continue to cut back regulations that hurt farmers and ranchers, all while lauding now-former Iowa Gov. Terry Branstad as the next U.S. ambassador to China.

Ahead of the rally that was filled to the rafters, Trump made a stop at nearby Kirkwood Community College to recognize the school's precision-agriculture program. There, Trump was joined by Branstad and new Iowa Gov. Kim Reynolds.

In the nation's largest ethanol-producing state, the president gave a nod to an industry that wants expanded markets.

"Your ethanol industry has been under attack," he said during the rally, although he stopped short of providing details.

The U.S. Environmental Protection Agency may soon release the latest renewable volume obligations in the Renewable Fuel Standard, the first such release by the Trump administration.

When the president nominated Scott Pruitt to head the EPA, there were concerns in some agriculture circles that the pro-oil Pruitt might dismantle the RFS.

Trump seemed to lay that notion to rest.

Now, he said, it's time for action.

"We want to see action steps, moving away from campaign rhetoric," Recker said. "Let's get to selling E15 year-round. Let's take care of trade agreements. Let's start talking about locks and dams. If we're going to grow larger crops, we need infrastructure. I wish he would have mentioned locks and dams."

Although the president "pushed all the right buttons" when it comes to talking agriculture, Recker said there still is concern on the ethanol front about EPA's Pruitt who was a noted critic of the industry.

"We're still on the defensive a bit," Recker said. "I hope we can build and get policies in place. I take him for his word that he wants to build rural America. The fact that he came to Iowa and talked agriculture issues is good."

The president received uproarious applause when he talked about his decision to eliminate the waters of the United States, or WOTUS, rule. The EPA has started a process that could lead to a rewrite of the rule.

Agriculture groups were against the rule because it expanded federal jurisdiction on private land. The rule was placed on hold nationally as part of a number lawsuits filed.

In offering red meat to his supporters, the president essentially mocked the WOTUS rule.

"If you have a puddle in the middle of a field, it's considered a lake," Trump said. "Can't touch it. If you touch it, bad, bad things happen to your family. We got rid of that one too."

Trump said his administration is working to reform the EPA. Another media outlet this week reported the agency is set to offer a buyout for some 1,200 EPA employees as part of a downsizing of the agency.

"No longer will EPA be telling you how to run your life or your business," he said.

When it comes to Branstad, the president said he was impressed by the nation's longest-serving governor's relationship with the Chinese.

Before Trump won the presidency, he said he had a conversation with Branstad about China.

"He said, 'Donald, can you do me a favor and don't say anything bad about China?'" Trump said.

"I remember a year ago I called him up and said, 'How would you like to be the ambassador to China? He wants to do what's right for the country. He said, 'When my president calls me to help with our great country, I do it.'"

For years agriculture interests have called for the elimination of the estate tax. Trump said the tax is hurting family farms.

"We're working hard to get rid of the death tax so you can pass along your farms to your children and your grandchildren," he said.

While declaring Democrats as "obstructionists," Trump used the occasion to press Republicans and Democrats alike to work together to pass health care reform, tax cuts and infrastructure legislation.

"We will rebuild rural America," he said. "In this great national rebuilding, we will buy American and hire American."

"He understands the important role technology plays in that mission and is committed to helping innovation thrive," Reynolds said. "On our visit to Kirkwood Community College, President Trump and I saw the high-tech equipment used in the school's precision agriculture program. Precision agriculture optimizes yields while conserving resources. Each advance made in technology is another step in the right direction for both farmers and the environment." 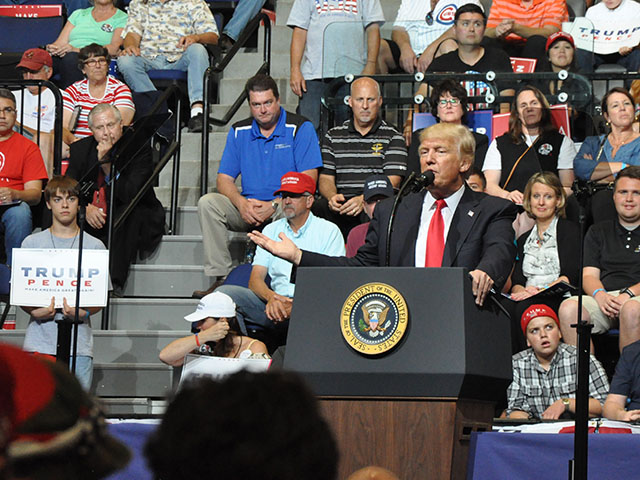