In a press statement on Wednesday, U.S. Secretary of Agriculture Sonny Perdue said USDA will examine the market concerns.

"I have directed USDA's Packers and Stockyards Division to launch an investigation into recent beef-pricing margins to determine if there is any evidence of price manipulation, collusion, restrictions of competition or other unfair practices," he said in a statement. "If any unfair practices are detected, we will take quick enforcement action. USDA remains in close communication with plant management and other stakeholders to understand the fire's impact to industry.

"I have spent this summer visiting with cattle ranchers across the country, and I know this is a difficult time for the industry as a whole."

"The premise behind this is that without the Tyson plant up and running -- and it may take months to rebuild -- beef supplies will be tighter and cattle prices will fall based on lower packing capacity," he said.

The Tyson plant killed 5,600 head a week, or equal to about 6% of the nation's beef-packing capacity. Boxed beef values surged on the idea that packers would not be able to deliver enough meat to the market, Kment said. Boxed beef values rose $22.32 per cwt in choice cuts.

"Ultimately from my calculations, packer gross margins increased over $200 per head during the week," Kment said. "Packer gross margins were already strong before this event, which added increased scrutiny to the entire system. The moves on both sides are overly aggressive, and had been driven more by fear and uncertainty than market fundamentals. But the speed at which these changes developed created its own momentum over the last two weeks. This has created even more volatility in the market."

National Cattlemen's Beef Association President Jennifer Houston said in a news release that it was welcomed to see USDA's reaction to market concerns.

"We encourage USDA to look at all aspects of the beef-supply chain and to utilize internal and external expertise in this investigation," she said. "We believe it adds transparency that will help build confidence in the markets among cattlemen and women."

Federal lawmakers have called on the Commodity Futures Trading Commission, or CFTC, to monitor cattle markets following the Tyson fire.

"Cattle producers have sound reason to question market events that transpired after the Holcomb fire," he said. "While a sharp decrease in slaughter capacity was anticipated, slaughter actually increased some 9,000 head from the week prior to the fire. Further, most expected this market disruption to cause uncertainty, but few could believe in one week fed cattle prices would drop 5% and choice boxes would spike 9% while total slaughter increased."

"But given the extreme effect the current market conditions are having on Iowa's cattle industry, we believe it is in our members' best interests to eliminate any doubts regarding the market reaction," he said in a news statement.

Tyson announced on Aug. 12 that the plant would be closed indefinitely, but said its 3,800 employees would continue to be paid.

The plant is often referred to as the Garden City plant, which is nearby. About 1,200 workers had to be evacuated from the plant on the night of Aug. 9 when the fire broke out about 8:30 p.m. CDT. No injuries were reported from the fire. 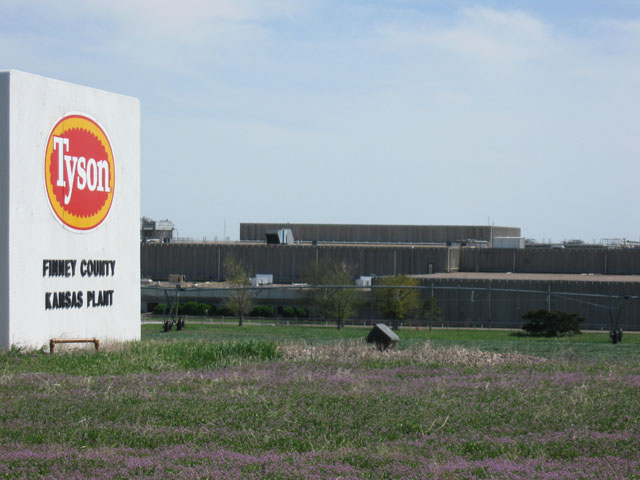