DECATUR, Ill. (DTN) -- Those yellow flowers filling fields across the Midwest aren't buttercups, baby. They are weeds and consumed in enough quantities, cressleaf groundsel, also called butterweed, can be toxic to livestock.

Ohio State University weed specialist Mark Loux said the winter annual weed is being found in fairly high numbers because the weather has held back herbicide treatments this spring.

Butterweed is common in no-till corn and soybean fields, and burndown herbicides are typically used to control it early in the spring when the plants are smaller and more susceptible. However, that didn't happen in many areas this year due to wet weather. It's also not an option in forage and wheat crops.

Native to the United States, butterweed can be found from Texas east to Florida, northward along the Atlantic Coast to Virginia, and west to Nebraska. The plant is poisonous to grazing animals such as cattle, horses, goats, sheep and to humans, Loux said.

There are several other weeds that send out yellow flowers this time of year, noted Aaron Hager, University of Illinois weed scientist. "Growers should take the time to look because wild mustard and yellow rocket can sometimes be mistaken for butterweed," he told DTN.

Butterweed is easy to distinguish because it has daisy-like petals with a pincushion-like center. It is a member of the aster family. Leaves alternate on the stem, are deeply divided and lobed. Lobes have round, serrated margins. Stems are hollow and grooved with purplish streaks. Most plants have one stem, but there may be more.

Loux said applying herbicides to hay fields isn't likely to reduce the risk of toxicity in animals. It's also too late for wheat growers to apply any herbicide to their wheat crops.

How much of the weed it takes to harm livestock has not been well documented, Hager said. The plants contain compounds called pyrrolizidine alkaloids (PAs). The PAs are found in the plant throughout the growing season but appear to be at their highest levels when the plant is in the bud to flower stage.

"Drying or ensiling the plants during the hay- or straw-making process doesn't reduce the toxicity of cressleaf groundsel," Loux said.

Mowing before the weed is in the bud to flower stage will most effectively prevent seed production, but that doesn't minimize the risk of poisoning. Loux stressed that it is important to prevent including those mowed plants in hay or straw -- or to discard bales that contain it. The groundsel is not likely to regrow after the first cutting of hay in the spring. The goal of control strategies should be to prevent it from contaminating the first cutting.

It was also noted that using unplanted acres for grazing could be risky if butterweed populations are high.

Hager said his research has shown that up to 98% of cressleaf groundsel plants emerge in the fall. "Most of those you see in the field today are already going to seed. If you had a big problem with them or other winter annuals this spring, fall controls are something to consider," he said.

"Butterweed is easy to control with fall or early spring burndown in crop field settings and you'll be taking care of marestail problems at the same time," he noted. "We haven't seen big problems in hayfields, but it's certainly something to be watching for."

More information on cressleaf groundsel, including how to identify it and manage it, can be found on Ohio State's weed science website at: http://bit.ly/…

Find a video about butterweed from Aaron Hager here: http://bit.ly/… 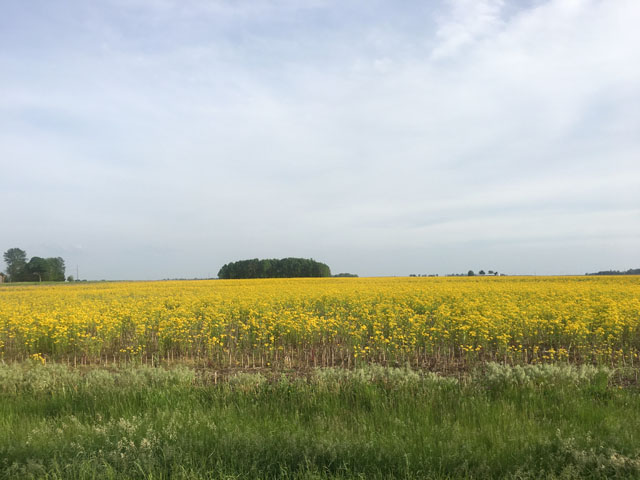