OMAHA (DTN) -- With his expertise in operating drones, it's common for Gibson City, Illinois, farmer Randy Aberle to get a knock on his door from neighbors requesting field flyovers.

Now, with a new Federal Aviation Administration rule for unmanned aircraft systems -- commonly referred to as drones -- taking effect Aug. 29, Aberle said he may be doing more of the knocking on neighbors' doors, offering his services.

As co-owner of Flying Ag, an agriculture drone business, Aberle said he has well understood the business potential of using UAS on the farm.

Until now, however, there were too many risks in going too far.

Farmers who use the technology have had to rely on an FAA exemption to operate UAS systems -- making them technically in violation of FAA law that requires pilot licenses to fly drones. The provision often made it impractical to operate UAS on the farm.

"Guys who have drones are aware of it (the law) and excited about it," Aberle said.

"I can say for sure we're legally flying now. Before, FAA was going back and forth (on the rules). We thought we were OK, but we were in a gray area. Now we actually have a program with protocols. I know the rules apply to me. We were already flying by those rules -- visual line of sight, maximum 400 feet in elevation.

"Those rules there have not changed. It applies to the actual operator. I will take the test. No. 1, I know I'm legal, and No. 2, I have neighbors coming to me asking me to fly their fields. Now I can legally do that. The new law takes all these questions away."

The new rule allows operators to earn remote pilot certificates to operate drones without having to hire licensed pilots.

Aberle uses drones to monitor crop health and to seek out problem areas on his 1,400 acres.

Once producers see farmers like him regularly using drones and that for a $500 to $3,000 investment they can get a return, Aberle said he believes they will begin to show more interest in making UAS a regular part of their operations.

Matthew Brown, attorney and founder of USDroneLaw.com, told DTN the new regulation likely will lead to more drone use in agriculture. Rather than getting caught up in all the details of the regulation, he said, farmers likely will be in compliance by following a few set rules.

Generally speaking, he said, a farmer will be legal if he or she is not flying a UAS above other people, is operating with a remote pilot certificate, performs a pre-flight inspection of the device and flies in daylight at lower than 400 feet of altitude.

The rules provide a number of exemptions that could be useful to farmers, Brown said, including an operator's visual line-of-sight.

"On a clear day, you can see a long ways," Brown said. "But if there is a tree line and you want to go over the trees and out of the line of sight, a waiver may allow that."

Farmers who want to prepare to test for the remote pilot certificate will have online access to a practice test once the rule takes effect.

The good news is farmers will not be required to take training flight time. Test-takers will be vetted by the Transportation Security Administration before final certificates are issued, he said.

"It's not something the average person is going to be able to do without a little bit of study," Brown said.

Brown said that as more farmers see how relatively inexpensive drones are, that the technology is available off the shelf and that there are very few safety issues involved, he expects interest will continue to grow among farmers to own and operate the technology themselves.

"I think we'll see a gradual adoption now with the rule we already have in place," Brown said.

"Farmers will be most interested in the cost-savings (on the farm) and the simple fact they can purchase a drone (for) $500 off the shelf. When people see how simple it is to use with very little background in flying, it has all sorts of great attributes to save time and money. Where it is taking off right now is in photo capabilities and thermal imaging to check elevations in fields."

That includes monitoring crop temperatures, watching for disease and pests, tracking down livestock -- areas where it has the potential to save money for farmers.

"If farmers are closer to more air traffic, there may be more conflicts between manned and un-manned aircraft," he said. "There's going to be growing pains with this industry."

With the initial UAS rule completed, Brown said, there are a number of future regulatory questions to be answered.

The next set of regulations may be two-fold, he said. One area of consideration may be rules to allow drones to carry products.

"I don't know if this is of use to farmers, but it may be good if there is an equipment failure in a field somewhere and they need a part, it could be delivered," Brown said.

Second, he said, at some point the FAA may consider rules for a drone air traffic control system, primarily for carriers.

Farmers who may be considering an investment in drones but are concerned about liability issues, do have insurance coverage options available.

In recent days, the American Association of Insurance Services announced new filings of unmanned aircraft liability coverage forms and rules, according to a news release. The company's new coverage is approved in 34 states, in anticipation of the new FAA rule taking effect.

"The economic impact of this ruling is expected to be first felt in farm and agribusiness as it is the fastest growing commercial sector using drones," the company said in a news release.

Read a summary on the new FAA rule here: http://bit.ly/… 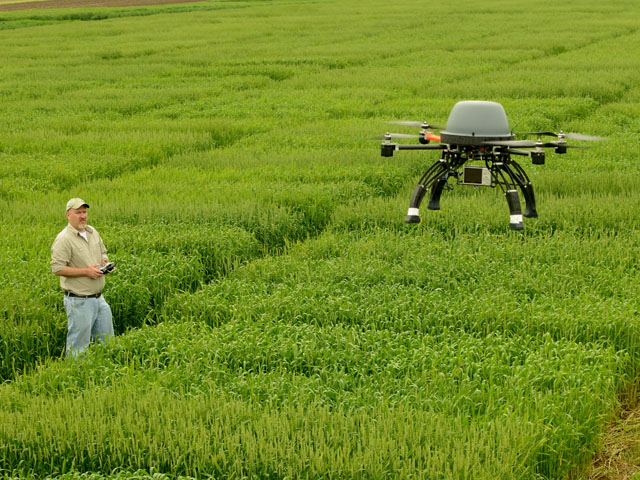