The payment details are complicated, depending on whether livestock or crops are involved and whether producers had sold their commodities within a timespan from Jan. 15 to April 15 of this year.

Farmers and livestock producers will initially receive 80% of their calculated payment under CFAP. USDA right now has $9.5 billion from the Coronavirus Aid, Relief and Economic Security (CARES) Act and $6.5 billion in funds from the Commodity Credit Corp. USDA officials on Tuesday acknowledged the aid available right now will not meet all of producers' expected losses.

"To get the program out quickly, we're using all of those resources that we can," USDA Chief Economist Robert Johansson said on a call with reporters Tuesday. "But it certainly will not rise to the level of the damages we're expecting to see for agriculture and producers as a result of the coronavirus."

USDA is expected in July to have at least another $14 billion to tap from the Commodity Credit Corp., barring any further additional legislation passed by Congress.

Local Farm Service Agency offices can start accepting applications on Tuesday, May 26. Farmers and livestock producers will have to set up phone-call appointments with FSA staff because they are not accepting in-person visits due to coronavirus restrictions. Producers can also communicate with staff through email or go online to fill out applications.

Cattle producers will be the largest recipients of aid at roughly $5 billion. The payments break down several different ways depending on the type of cattle, if they were sold from Jan. 15 to April 15:

For payments, USDA will require producers to document the number of head a producer sold from that Jan. 15-to-April 15 time frame.

Unpriced cattle in inventory from April 16 to May 14 receive a flat rate from the Commodity Credit Corp. of $33 a head. Producers can basically pick a date of their choosing in that time frame and report their inventory to USDA.

Lambs and yearlings also have a CARES payment of $33 a head and a CCC payment of $7 a head.

Left out of the program were contract poultry growers. USDA officials said farmers would have to show ownership of the commodity to receive a payment.

For commodity crop producers, payments are eligible for unpriced crops, or "inventory held subject to price risk" that a farmer held on Jan. 15, 2020.

"If you already sold it ahead, you set a price on it, then that's not being impacted by the reduction of prices," said Bill Northey, USDA's undersecretary for farm production and conservation.

The inventory will be self-certified, Northey said, though there will be some compliance audits conducted, he said.

"We want it to be correct, but we want to avoid large amounts of paperwork at the county office," he said. Northey added, "We just need a final inventory."

Yet, it is more complicated the way the rule is spelled out.

Payment limits have been adjusted under the CFAP as well. Payment limits are raised to $250,000 per individual, raising the limit for a married couple to $500,000.

Another change affects corporations, which typically receive one payment limit. Under CFAP, corporations, limited liability corporations and partnerships with members and shareholders can receive up to three payments if they have members or shareholders who contribute at least 400 hours of active personal labor or management. So those corporate entities could receive a maximum of $750,000 in payments if three members can meet those actively engaged standards, Northey said.

Once USDA determines a producer's payment, the department will make a payment of up to 80% of the total within a week.

"We believe those payments can go out within a week of when we open up here," Northey said.

Another 20% payment will be held back for later in the year, depending on when funds become available.

Payment adjusted gross income is capped at $900,000 for producers, unless they can show at least 75% of their income is derived from farming, ranching or forestry.

Greg Ibach, undersecretary for marketing and regulatory programs at USDA, said specialty crop producers -- fruit and vegetable growers -- would be paid based on multiple factors. Producers would receive a payment for crops sold from Jan. 15 to April 15. A different payment is established for specialty crop producers who harvested and shipped crops, but they spoiled because of lost markets over that time.

Ibach also said USDA is looking for details from farmers on the impacts they received raising nursery products or aquaculture products, if those producers can show a 5% market decline for their products.

More information on the Coronavirus Food and Aid Program, including ways to sign up, can be found at www.farmers.gov/cfap. 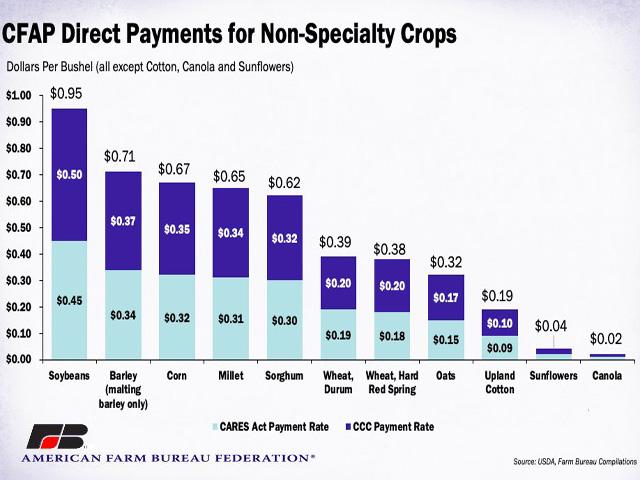