ROCKVILLE, Md. (DTN) -- The early bird may get the worm, but the late-emerging weed gets the run of the field.

Just ask Zack Rendel, who is starting to battle mid-summer flushes of cocklebur, a weed he thought he left behind with childhood.

"I've noticed our clean-up sprays are becoming a little bit later," Rendel, who farms near Miami, Oklahoma, told DTN. "Normally they're in late June, but now they're later than that. On some sorghum fields, the cockleburs can be a really big problem."

For many growers, weeds like velvetleaf and cocklebur receded from their cab view when Roundup Ready crops took over the landscape.

Now they're back -- with a dangerous new habit of sleeping in.

"We don't think it's chemical resistance, but we do think we're seeing a shift in emergence patterns," said Michigan State University weed scientist Christy Sprague. "Cocklebur and velvetleaf are coming up later in the season after a lot of postemergence herbicides have worn out."

Environment may be playing a role, too.

"Our weather environment is so unpredictable, and in certain years, these weeds seem to be more prevalent than others," Sprague said. "When they come up seems to be triggered by certain combinations of temperature and moisture."

Let's get reacquainted with these two weeds, which plagued our grandparents and are staging a comeback.

Surely every child and animal in the countryside has been on the losing end of an encounter with cocklebur at one time or another.

Resembling tiny hedgehogs, the oval-shaped burs have hooked prickles that behave like Velcro on steroids.

"The burs are a big deal because they let the weed seed transport easily," Sprague said. "They grab onto things, like animal furs, and are very easily transported by animals."

The weed traditionally emerged shortly after planting, in late May or early June, and posed a problem in row crops, particularly soybean fields. Because the seeds were safely cocooned in the bur, soil-applied residual herbicides weren't very effective on them, but they were easily tamed by postemergence passes of glyphosate.

Glyphosate -- and other older chemistries -- are still effective against cocklebur, Sprague said. But now the weed is waiting until late June to sprout, after herbicides have come and gone.

"It's tough because not a lot of postemergence herbicide options that would work have enough residual to help with it," Sprague explained. "Growers just need to be aware that they might need an additional application to get it under control."

Those later applications can be hard to squeeze in before growth-stage restrictions on the label kick in, Rendel noted.

"I've seen cocklebur be 4 inches tall and still put seed on," he said. "It could potentially be a big problem. The later those come up, the more seed they leave out."

VELVETLEAF -- A WEED OF MANY NAMES

Velveatleaf, buttonweed, butterprint. These are just a few of the names for this troublesome summer annual that thrives in pastures and ditches, as well as corn and soybean fields.

"With this particular leaf surface, glyphosate absorption can be challenging," she said. "There's been a lot of work done with adjuvants, and we still recommend including a nitrogen source, like AMS, to the tank."

Some older chemistries are still effective on the weed, especially HPPD inhibitors in corn, Sprague added. Postemergence options in soybean are trickier, but older "burners" like Resource and Cadet still work. "They'll cause some leaf burning in soybeans," Sprague cautioned.

However, like cocklebur, velvetleaf appears to be emerging later in the season, when these products don't have enough residual to affect it.

On Rendel's operation, the return to a pre-Roundup-Ready-era weed control system has been a slow but steady march of necessity. They make time for aggressive preemergence applications and run clean-up passes with Cobra, Classic and Select. In a flashback to his childhood days pulling a six-row cultivator, he has added some tillage back in, as well as some conventional, non-GMO soybeans.

New weed control systems like Xtend's dicamba-tolerant soybeans and Enlist's 2,4-D-tolerant crops are making their way into the market place, as well. Both dicamba and 2,4-D are ranked "fair" on velvetleaf and "good" on cocklebur, Sprague said.

But none of these options can fully combat old weeds playing a new waiting game.

"Again it's just a matter of timing," Sprague said. "The bigger issue is being able to control these weeds when they're actually there." 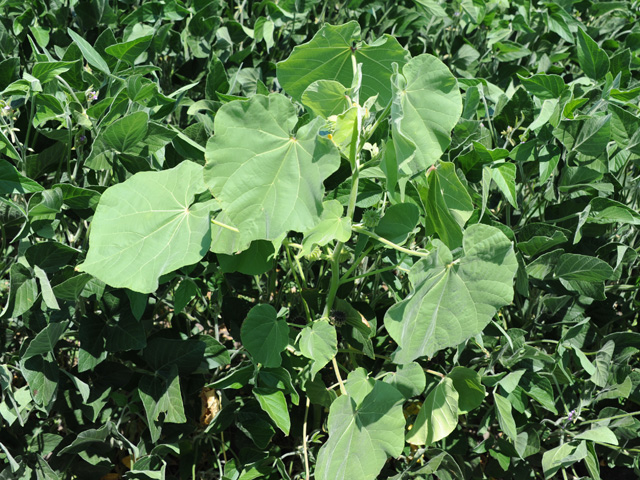