MINOT, N.D. (DTN) -- Adam Lee, who farms with his father near Plaza, North Dakota, looks around at area grass and pasture and notes how a few shots of rain in the past few weeks have started to green up the fields again.

"It just raises everybody's spirits up a little because everything has greened up," Lee said.

Lee was in an area that caught about three-quarters of an inch of rain about two weeks ago. For the farmers who got it, that single shot of rain could help fill out the spring wheat crop.

"Everyone around here has been so amazed by how tough the wheat crop really is," Lee said. "Whether it fills or not, or whether we get any quality, that's a whole other ball game."

After a brutal June and early July, the first few days of this week the weather around Minot has been relatively mild in the mid-80s, but Lee noted the forecast for the next week will bring 100-degree days back to beat down on crops that are already suffering.

"We were just hoping we would escape that heat, but it doesn't look like that's going to happen," he said.

North Dakota farmers are on the eastern edge of some of the most exceptional drought conditions in the country. In a state where people pride themselves on managing tough winter conditions, farmers across the state point out they actually went through winter with virtually no snow or other moisture.

Parts of North Dakota are usually so wet that farmers struggle to get crops into the wet fields. This year, most of them can barely catch a rain like the one that Lee's farm got a few weeks ago.

Crop conditions statewide are generally poor to very poor. At least 54% of the spring wheat and barley crops fell into that range this week, according to the state's Crop Progress report. About 45% of the canola was poor or very poor, as well as 64% of the state's alfalfa, and 37% of the soybean crop.

At least 71% of the pasture also fell into the poor or very poor ratings. DTN will report on the struggles facing livestock producers in a follow-up report.

Trent Sherven farms a diversified crop operation with his father near Ryder, North Dakota -- about 20 miles from Lee's operation -- and raises winter wheat, spring wheat, barley, durum, canola, soybeans and sunflowers. His fields have gotten a few sporadic small rains, but his spring crops haven't grown enough to produce any kind of canopy in the fields. The planting rows are still visible and weed pressure is growing as well.

"This is the driest I've ever seen and my dad compares what we're seeing now to 1988, except we went into '88 with more moisture in the soil," Sherven said.

On Tuesday, crop-insurance adjusters were driving around looking at some of Sherven's fields. Durum and barley crops that would normally be at least waist high are both stunted. Beyond the yield loss, Sherven expects the crops will also have quality issues, such as the barley not making the grade for malt. Sherven said there are already producers in the area cutting and selling barley for feed. His soybean fields, planted in late May, are barely a few inches high in some fields.

"Most of their yield potential has already been lost," he said.

Sherven is on the board for a local cooperative, CHS Sunprairie, which has seven grain elevators in the area. Cooperative members wonder what will be delivered this year. "It's kind of left everyone speechless," he said.

Adnan Akyuz, North Dakota's state climatologist, sent a report out to county agents this week showing June was the 15th driest statewide on record, but it also was the third-hottest on record, going back 122 years. Akyuz noted the statewide data on moisture takes into account those areas that got some rain.

"Precipitation is just one factor in the water budget and the other factor, which is usually overseen, is the temperature," Akyuz told DTN. "In the summertime, evaporation exceeds precipitation, and we have to take into account that when the temperature becomes higher, the air becomes more thirsty for water."

As farmers compare this summer to 1988, Akyuz added, "The warmest June on record happens to be 1988. Farmers know that. They remember and they compare how dry it was in 1988 and how warm it was."

Drilling down more to county levels, there are several western counties that are seeing their third- or fourth-driest month in history. Akyuz also noted -- as did multiple farmers -- that the drought in several areas goes back more than a year. Most farmers who spoke to DTN pointed out that the state got almost no snow this past winter, a surprising circumstance in North Dakota.

"In short term, the last six-month to nine-month period, the intensity of the drought is going to be comparable to the 1930s, even the 1950s and 1980s," Akyuz said.

The drought, and how farmers and ranchers are managing it, was the major topic of conversation at a North Dakota Farmers Union meeting this week in Jamestown. George Siverson, 80, said he got just four bales of hay out of 20 acres. Siverson farms in the southwest corner of North Dakota. "These are the worst conditions I've ever seen," he said.

Tyler Stafslien, who farms near Makoti -- and is Lee's cousin -- said he had caught rain in the last few weeks," but it is just way too late for the wheat," he said.

"As far as the drought monitor goes, it can't get any worse," Stafslien said. "Most of the wheat crops around here have been zeroed out completely and the best fields will be very subpar on yield compared to most years. I've got a wheat crop that's been zeroed out already and I'm likely going to burn down with Roundup fairly soon, and there's nothing there. That's just the state of affairs around here."

Stafslien said soybeans for some farmers are "getting by" because they were planted later and at least some fields have gotten a few late June showers.

Mark Watne, president of the NDFU, said the group has been working with Sen. John Hoeven, R-N.D., to reauthorize an ad-hoc disaster assistance program -- the Wildfire and Hurricane Indemnity Program-Plus (WHIP-Plus) -- for 2020 and 2021 disasters.

"Sen. Hoeven has promised he's going to try to lead that," Watne said. "And so we're hoping to get that process started."

WHIP-Plus was authorized for 2018 and 2019 disasters, and only recently did USDA release funds for the second portion of payments from some of those disasters.

"It just seems like we have to go through this every couple of years to get Congress to act," he said. "You shouldn't have to get 14 states with a disaster before you respond. We really need a permanent program that can respond a little quicker."

Looking at a poor canola field is frustrating when canola prices are more than double last year's harvest price -- $32 per cwt compared to $14.20 a year ago. Canola is blooming everywhere, but the fields are uneven, and in most places the crop is short and thin.

"Usually by now, it is waist high and so thick you can't walk through it," Lee said.

While prices have come up for canola and wheat, so did the input costs. Fertilizer prices especially rose dramatically this spring, and Lee wonders how much nitrogen went into the ground, given it was applied in such dry conditions.

"We haven't gotten the benefit of the good prices yet, but we did see the higher input prices this spring," he said.

There's a little bit of irony considering last year, coming off a wet 2019, much of the area produced strong yields but saw low prices.

Lee, driving a visitor from DTN around in his great-grandfather's 1964 GMC three-speed-on-the-collar pickup, said he's considers optimism a necessary trait for a farmer. Passing by his corn crop, Lee noted, "If we could get some rain for this corn and beans, we could pull something off." 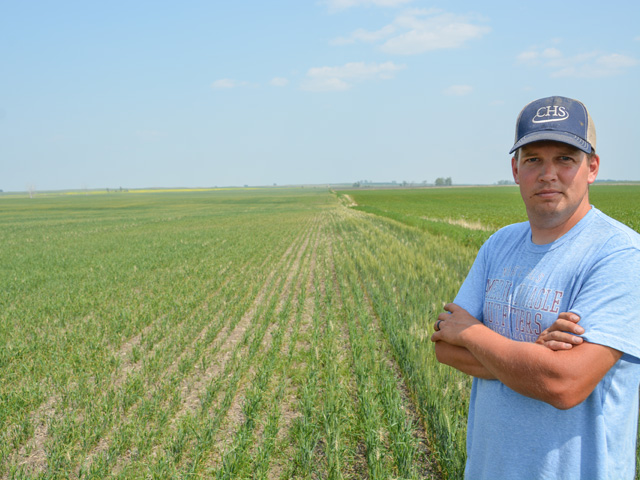