DES MOINES (DTN) -- Polly Ruhland, chief executive officer for the United Soybean Board, came to the World Food Prize symposium this week to make a pitch.

"At World Food Prize, what they think about is feeding the world -- using technology to feed the world," Ruhland said. "We think at USB, we should think not only about making more food, but we should make sure those people who don't get enough food should get high-quality food."

Protein is an absolute necessity for people who are undernourished, Ruhland noted. Soybeans are a protein source for emerging markets.

At the World Food Prize this week, Ruhland raised the idea of U.S. protein groups to work together on marketing plans and strategies factoring in all meat and plant protein options rather than pitting groups against each other. The focus is "Protein First."

When countries grow economically, they often move along a protein chain, Ruhland pointed out. As incomes rise, people will move from plants to fish, to eggs and poultry to pork and beef. "We know the potential for meat protein worldwide is growing exponentially," she said. "So I think there's a strategy here where everyone from plant protein to animal protein can get together and identify countries and where they are at in the customer journey of disposable income."

Such a long-term strategy would have the various U.S. groups working in coordination to market their commodities in countries. "Not taking competition away and not market your own product, because of course you are going to do that, but you market your product as part of a strategy that's collaborative."

Ruhland said the World Food Prize "was a very logical place" to start talking about an international market and conversation about feeding the world. "We talk a lot about making more food to feed 9 billion or 10 billion people; we don't talk so much about the quality of the food we are going to make and how that works in a global market."

Ruhland noted soybeans are used both to feed people and livestock. Yet, pork and beef benefit because of higher demand as disposable incomes rise. "So there is a place for everyone in a collaborative protein strategy," she said.

Ruhland related her strategy to some of the messages and conversation coming out of several CEOs on Thursday at the symposium discussing ways to make agriculture more driven by demand. Leaders for Corteva Agriscience, Bayer AG, Syngenta and Kemin Industries shared a panel discussion about feeding the world in 2050.

Collectively, the CEOs agreed the world right now is falling short when it comes to the prospects of feeding 9 billion to 10 billion people, but their reasoning varied.

The ability to double agricultural production in some parts of the world is largely a matter of sharing agronomic information, but those efforts are falling short, said James Collins, CEO of Corteva. "I'd say we've made good progress, but the rate of change and pace we are on today, we are still going to fall short."

Liam Condon, president of Crop Science for Bayer AG, said one reason Bayer chose to buy Monsanto in 2016 was the need to increase innovation in crop technology. Looking at food demand now, there are roughly 820 million people facing severe malnourishment.

Condon said agricultural production is still heavily resource-driven. More effort is needed on the demand side to meet nutritional needs. "So both in the demand and in the supply side clearly we need a lot more innovation to get to a healthy, sustainable world," he said.

Frywald said more technology also is needed to help reduce the impact of agriculture on climate, translating into feeding the world with fewer resources. Not only does deforestation need to stop, but reforestation must occur, he said. Frywald said this is largely happening in the world's largest economies, but more work is needed, especially in parts of Africa and Asia. "That takes both technology and training to do that," he said.

Collins, Condon and Frywald each later said consumer acceptance of agricultural products has to improve. That issue was raised multiple times over the past few days regarding how global consumers and regulators treat the science of gene editing. "That's why Corteva along with other folks here have really focused on how we learn from some of the mistakes made in the past on GMOs and GM technology, and how do we become more transparent and share the benefits, and how do we use those tools to do more good things that society will actually recommend as a positive?" Collins said.

Condon later said it's important for agriculture "not to work in an echo chamber" when it comes to scientific innovation. Consumer and political acceptance is needed, especially in Europe because if gene editing isn't accepted in Europe, then the technology is likely closed in Africa as well.

Ensuring consumers understand the benefits of technology, Frywald pointed to the acceptance of plant-based proteins such as Impossible Foods and Beyond Meat products. "And guess what? It's GMO-based, the grains," he said. At first, Impossible Foods was getting attacked over ingredients from biotech crops, but the company stood by its use of GMOs in its products.

"The GMO technology is helping farmers become more carbon neutral ... there's no health issues with this, we're going to step up and say this technology is good for the world," Frywald said. He added that celebrities still endorse those products. "That's what we need. We need the consumer pull rather than the technology push."

Chris Nelson, president and CEO of Kemin Industries, a food and feed ingredient manufacturer in Des Moines, said some feeding challenges are unrelated to technology, but tied more to the lack of political will. He noted 80 million children in India suffer from inadequate nutrition, largely because of the lack of political will on all levels of government. Due to these political problems, Nelson said he was pessimistic over the prospects of feeding a population of 9 billion people.

"That pessimistic side of me on the political area says we who have been involved so much in the technology can no longer sit by and develop only the technology, and as the famous Iowa movie says 'Build it and they will come.' This is not necessarily the case," Nelson said.

Also on the CEO panel was Josephine Okot, managing director of Victoria Seeds Ltd., in Uganda. Okot said women, the dominant farmers in Africa, still need basic mechanization to increase productivity. They also struggle with credit and face operating loans with 20% annual interest rates. "I think it is not fair and I would like to see African farmers receive the kind of 1% interest loans that European banks offer some of these companies," she said. "At 20% you can't grow your business. We can't grow our businesses with this debt."

Okot told the other CEOs on the panel they need to look at equity and developing more partnerships with African farm and seed businesses. 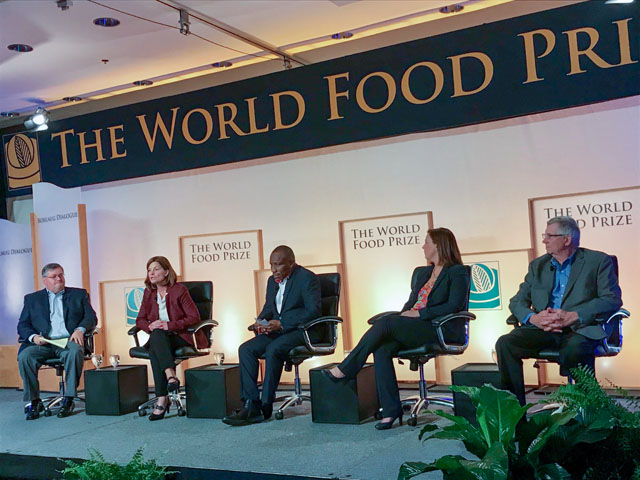