The tour made 240 stops to measure wheat, most of them a muddy affair, as showers and thunderstorms pelted many of the tour's routes through central and northern Kansas, as well as the southernmost counties of Nebraska.

That moisture has been a game changer for the quality and yield potential of this year's winter wheat crop, noted Doug Bounds, the Kansas state statistician for USDA NASS.

"Last year roughly 97% of the state was in some state of drought at this time," he said. "Now zero percent of the state is in a drought. So we have drastically different conditions this year."

As a result, estimated yields ran consistently higher than last year on the tour's first day, even as some dry soils emerged in the western half of the state. Justin Gilpin, CEO of Kansas Wheat, piloted a car on the green route, which traveled through the state's northern tier of counties. There, scouts found yields averaging roughly 10 bushels per acre above last year. On the blue route through central Kansas, tour organizer and Wheat Quality Council Executive Vice President Dave Green scouted fields with an average of 49 bpa -- 14 bushels above last year's blue route average on day one of the tour.

However, the historically low wheat acreage in Kansas was also visible Tuesday, Gilpin said. Winter wheat acres in Kansas dropped to 7 million acres this year, the lowest since 1910.

"As someone who has been on the tour several times, the most noticeable thing to me is that there are a lot fewer wheat acres, especially on that northern tier of counties," he said. "I think we'll see more corn acres replace those wheat acres."

Most wheat fields were also behind their average pace of development, with fields in northern and central Kansas ranging from tillering to flag leaf growth stages, with only a few in the boot stage. Fields became noticeably less mature as the tour routes moved westward. Most scouts estimated the fields they visited ranged from six to eight weeks from harvest.

Nearly half the winter wheat crop was planted late due to persistent wet weather in October, noted Romulo Lollato, Extension wheat and forages specialist for Kansas State University. "There is a very big difference between fields planted in early October and September and late October and November," he explained. Cool-to-moderate temperatures this spring have not encouraged the crop to catch up, he added.

Scouts on the blue route encountered one such underdeveloped field in Rooks County, where the farmer explained that rain and soybean harvest had stalled planting until Oct. 19. The wheat had barely made it out of the ground before dormancy and was still tillering, with a calculated yield potential of just 28 bpa.

Less mature wheat requires some adjustments to estimate yield potential accurately, noted Aaron Harries, vice president of research and operations for Kansas Wheat. When heads have not emerged yet on the wheat plant, the tour's formula for calculating yield must rely on the number of stems on a wheat plant, which are all theoretically capable of producing a head.

"The yield formula accounts for the fact that the wheat plant will slough off some tillers," Harries said. "They won't all make it unless conditions are ideal, which is rare. So the formula does account for that happening."

Most scouts encountered little disease on their routes. Some routes encountered minor freeze damage, in the form of burned leaf tips, but most wheat was not far enough along to suffer damage to wheat heads on this portion of the tour.

Lollato noted some patchy nutrient deficiencies in some fields on his car's route, which explored the very center counties of Kansas before heading northward to Colby. "It's been so cold for so long that organic matter and sulfur hasn't started being released as much as it should," he noted. "And with all the rainfall over this winter, we might have lost some of our nitrogen through denitrification or leaching, depending on soil type." As the weather warms this spring, nutrient availability could improve, he added.

Overall, Green said he was impressed by the wheat potential in central and northern Kansas.

"This is really good wheat for this area," he noted. "I think we'll hear the words 'above-average' a lot."

Wednesday, scouts will wind their way through western, southwestern and south-central Kansas, with one route dipping into northern Oklahoma, before ending the day in Wichita. 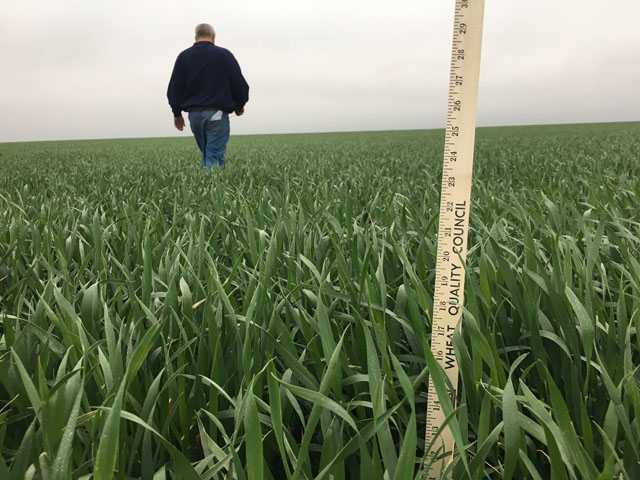