KANSAS CITY, Mo. (DTN) -- The Federal Reserve Bank should consider raising interest rates now as there are signs the overall national economy is ready for increases and low rates may be exacerbating pressure felt by rural banks from a slow agriculture economy, the head of the Federal Reserve Bank of Kansas City said Monday.

Esther George, chief executive officer and president of the Federal Reserve Bank of Kansas City, told an audience of bankers, farmers and others during an agriculture symposium that the current agriculture downturn has small bankers on notice.

"If you're in the ag community, you are seeing more pressure," she said. "Ag bankers are looking at their portfolios in the third year of depressed farm incomes. Not all farmers are prepared. I wouldn't say we're in a crisis, but we are seeing signs of underperforming loans."

In the seven-state region of Missouri, Nebraska, Colorado, Kansas, New Mexico, Oklahoma and Wyoming covered by the Federal Reserve Bank of Kansas City, George said there is no reason to believe any banks are in trouble.

"At this point the banking industry has stronger capital and is in a better position than it was seven or eight years ago," she said, although a sagging agriculture industry is one of the pressures being closely monitored by the Federal Reserve. "The banking industry does not benefit in a low-interest rate environment."

George said while the Fed decided recently not to raise interest rates after a poor May jobs performance that saw just 12,000 jobs added to the economy, June's bounce-back to 200,000 jobs added is a sign the economy can handle higher rates.

"Since the increase we've seen the economy grow, inflation up and jobs added," she said. "It is not an economy that needs the interest rates at the current level. It's time to move rates up to pace how the economy is performing today. Waiting too long can bring costs to the economy.

"I'm not advocating for high rates. It is an opportunity to move rates to a new level. It would begin to remove distortions in the economy. My hope is adjusting would allow the economy to be on a more sustainable growth rate long-term. Rates can't go down much further."

Much has been made about what is believed to be an under-performing economy in the past six years. During that time the Fed has left interest rates virtually untouched. George said the economy has responded by continuing to grow.

"I think for all of the commentary about how low growth disappoints in the last six years, I have found this economy to be resilient," she said, pointing to the fact the economy has consistently turned in 2% growth. "I think this will continue."

George points to a second-quarter growth in consumer spending and the June jobs number as "a good indication going forward." Consumer spending, she said, has been one of the strengths in the total gross domestic product.

On the downside, she said business investment has been "relatively weak," along with the manufacturing and energy sectors. On the positive side, George pointed to residential housing investment as a strong point of the overall economy -- recording 16% annualized growth in the first quarter this year.

George said one of the mysteries of the economy is slow overall economic productivity, which has averaged less than 2%. "There's a lot of work yet to be done to decide what this means," she said.

When it comes to overall inflation, George said the lack of inflation is the story, while still staying within the Fed's 2% target. When it comes to the outlook, she said she remains "relatively optimistic even at 2% growth."

There are three risks to economic growth the Federal Reserve Bank is monitoring closely.

George said Great Britain's vote to exit from the European Union, economic slowdown in China and a growing number of nations with negative interest rates are all potential risks to continued growth in the U.S. economy.

The vote to leave the EU, she said, created market volatility in the U.S. briefly, but so far doesn't appear to have had a major effect on the economy.

"If you look at the exposures the U.S. is not subject to headwinds from the UK," George said. "It's not to say we're immune to the effects of it. The markets could again become unsettled."

When it comes to China, George said its economic slump is important on a number of fronts.

"We all got comfortable with double-digit growth in China's economy," she said. "Now it is 6% to 7%. It is a slowing the world is feeling."

George said the Fed is watching with concern the effects of economic stimulus in China, with concerns that increasing debt could further slow the Chinese.

A negative interest rate policy means banks are charged fees for money on deposit, rather than receiving net interest payments. Negative interest rates are thought to reduce the risk premium on marketable securities. That would lower yields on so-called safe assets.

"It is having an effect around the world," George said. "It will be some time to see how this turns out." 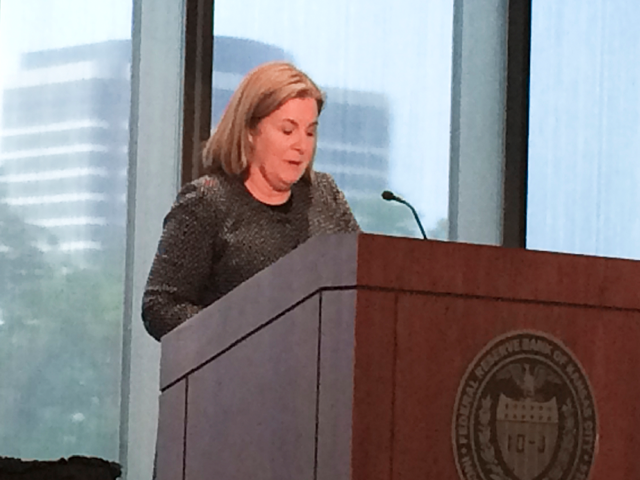