Rural America is widely credited with giving now-President Donald Trump his margin of victory over Hillary Clinton two years ago. By the results of our newest DTN/The Progressive Farmer Zogby Analytics poll, rural America does not regret the decision -- and it is motivated to vote to show support for him again in the midterm elections, just a few weeks away. The Zogby survey shows support for Republican candidates, for President Trump, himself, and for his trade policies.

The Zogby survey echoes the positive feelings farmers displayed on another recent survey; in the latest DTN/The Progressive Farmer Agriculture Confidence Index that was released Sept. 26, farmers were as confident as ever, pushing the index to a record high. (See https://www.dtnpf.com/…)

It would be bold to predict history is about to repeat itself given the gale-force winds blowing against the president. However, two DTN/The Progressive Farmer Zogby polls -- one conducted in 2016 and the newest poll conducted this August -- include similar results.

With only weeks remaining before the 2016 presidential election, that Zogby poll showed Trump leading Clinton by nearly 2-to-1 among voting rural residents and farmers. It seemed a fairly unbelievable result at the time.

Our newest poll shows rural residents remain satisfied with Trump's win by a margin of 54.4% to 35.2%. Zogby polled 1,271 rural residents and farmers for this survey (margin of error is plus or minus 2.5 percentage points).

Zogby asked rural residents if, given a chance, they would cast their ballots differently than they had in 2016. More than 70% said no, although that endorsement may not sound deeply felt.

"I think we got the lesser of two evils for the presidential race," Adam Winkelman said. "I think we have a lot of room for improvement. But, I would said as a whole, I am more satisfied now than I was." Winkelman Farms, of Arenzville, Illinois, includes 700 acres of soybeans and 200 acres of corn. The Cass County farmer also manages hogs, cattle and trucking enterprises.

"[It was] disappointing that those are the only two choices we had," Cody Goodknight said. Goodknight Farms is 6,000 acres near Chattanooga, Oklahoma. His farm is a diversified business of wheat, wheat seed, soybeans, cotton, sesame and sorghum. He also runs bred heifers and stocker calves.

Regionally, there are differences in rural satisfaction with the president. Voters in the South, West and Central/Great Lakes areas of the U.S. are satisfied with the outcome of the presidential election. Eastern farmers and rural residents are more nearly split on the question. More than half of younger voters (aged 18 to 29) are not happy with the election.

Respondents to the Zogby poll do not give the president or GOP a free pass on rural issues. Only 30.2% believe President Trump devotes enough attention to rural America. Forty-seven percent believe he misses the mark. That sentiment is especially true in the East (53.6% said no); in the Central U.S. (48.6% said no); and among younger voters (53.4% said no).

"We get put on the back burner. And, quite frankly, that needs to change," Marc Arnusch said. "I think, at the end of the day, we have to be talking more about rural economic prosperity -- beyond the farm. That includes rural economies, Main Street businesses, our rural way of life." Farming atop the Lost Creek Water Basin, near Keenesburg, Colorado, Arnusch manages corn for grain and silage, certified wheat seed, alfalfa, sugar beets, wheat and straw. From his 3,000-acre operation, Arnusch also produces malt barley for craft breweries.

Jeff Wuebker appreciates the president's focus on rural America. "Definitely more [supportive] than the last president, because he is visiting and talking about rural America," he said. Wuebker farms near Versailles, Ohio, and manages a sow and farrow-to-wean operation, steers, corn, soybeans, wheat and alfalfa. He's politically active -- past chairman of the Ohio Soybean Association and served on the Ohio Farm Bureau board of trustees. "The world is run by those who show up," he said.

Asked how well Congress -- both Republicans and Democrats -- focus on rural issues, the reply to the Zogby question is dismal. Only 9.1% said Congress devotes enough attention to rural issues, while 67.9% said the U.S. House and Senate fall far short of their expectations.

Goodknight, a registered Democrat, is disappointed with the Republican-backed tax plan and corporate tax breaks. He's disappointed that President Trump pulled out of trade agreements and the climate accord. "I think we need to work together, especially among powerful nations, better than our president is doing."

The survey indicates a deciding minority of rural residents are willing to give President Trump time for his China trade gambit to work, even as China orders retaliatory tariffs on American farm products. Nearly 37% said the "U.S. action is necessary to fix trade imbalances with China." Another 10.9% are satisfied with the administration's plans to compensate farmers for lost income because of retaliatory Chinese tariffs, and 7.3% believe the tariffs represent only short-term disruption. There are detractors -- 21.3% want Trump to reverse his decision to place tariffs on Chinese imports. Foreign policy, trade and tariffs are important to about a third of those responding to the Zogby survey.

Arnusch appreciates President Trump's focus on building market environments more advantageous to U.S. producers. "As someone who has 20 to 25 years of production ahead of me, I may never see this level of trade negotiations in my career again. We have to get it right this time around," he said.

Zogby finds 40.3% of the respondents to this poll identify themselves as Republicans, 23.4% as Democrats and 36.3% as Independents. Asked for which party respondents intend to vote, 47.4% plan to vote for Republican candidates, and 27.2% will vote for Democratic candidates. A large group, 25.4%, are not sure if they will vote. Independents and unknowns appear poised to decide rural midterm elections.

Voter enthusiasm in this midterm election cycle is high. When asked if they are more or less likely to vote this year compared to a presidential election year, 57.4% said they are more likely to vote this year. Only 20.7% said they are less likely to vote. Voters in the western United States and those 65 years and older are more motivated than other regions and age groups to vote in the coming election. Voters 29 years old or younger are less inclined to vote in this election, Zogby finds.

Among all respondents, it is clear that farm comes before party. More than 72% of respondents said policies affecting their farms are more important than party.

Matthew Efird farms in the San Joaquin Valley, a few miles south of Fresno, California. He manages 1,500 acres of almonds, walnuts and raisins. Efird aligns with Republicans and their values. "But, I'm not a Republican ticket person. I have nothing against voting for a Democrat if I feel their platform aligns with our issues."

Efird is satisfied with the nation's direction. Republicans frustrate him, however. "Every time Republicans get control of Congress, they circle the wagons and fire in," he said. "But, I have no complaints with any of our regional representatives making agriculture a priority. I think it's clearly evident that the president recognizes ag issues and sees them as a priority."

Arnusch agreed. He leans Republican but does not tie his vote to any single party. "I would have said most farmers are less interested if their state is 'Red' or 'Blue,' and are more interested in what is best for their farm," he said.

The Zogby poll reveals some differences in voting patterns by region, age and gender. Of men, 58.6% said they are more likely to vote for Republican candidates this year. Eastern U.S. rural and farm voters identify evenly as Democrat and Republican. Younger voters, 18 to 29, will likely vote for Democratic candidates. Voters in every other age category from 30 years to 65-plus lean Republican.

Rural respondents have a long list of concerns for Washington to tackle. Taxes are a high priority (64.5%), immigration (51.5%), followed by property taxes (48.4%), environmental rules and regulations (42%) and rising interest rates (38.3%). Broadband service, production costs, local roads and new markets and exports are lower on the list -- 26.5%, 25.2%, 19.5%, 18.4%, respectively. Asked which issues will be important to them as they enter the polling booth, 31.3% said trade and tariff policies would be a factor in their voting decision.

"Two [issues] I would put at the very top -- trade and immigration reform; I call it 'farm labor reform,'" Arnusch said. "We have to have access to an affordable workforce, one that has a skill that no one recognizes, the ability to work long hours with repetition."

Is it important that fruits and vegetables are harvested in this country? "Without a doubt," Arnusch said, answering his own question. "Those will be harvested by hands of immigrants. We just need to decide whether that'll happen in this country or in a foreign nation."

Zogby reports that 68.7% of those surveyed have confidence they will find the health care they need for change-of-life illnesses. Thirty-eight percent have family health insurance through an off-farm employer. But, 59.3% have no such benefit.

"We have health insurance through my wife. She's a teacher at the local school, and we have pretty good coverage," Wuebker said. "We see nurse practitioners, and I don't see the doctor much." He likes this form of medical delivery. "You can ask them questions, and they answer in much more real terms."

Wuebker carries workers' comp on himself and his employees. "I'm not covered by her insurance if I get hurt on the farm. They won't insure me as a self-employed farmer." 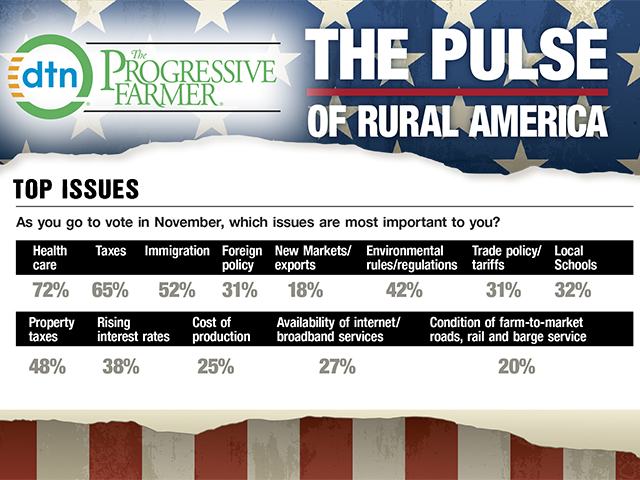